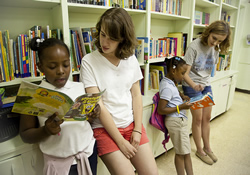 After graduation, then what?

It's a question all college students must face, and for many it can evoke concerns about having chosen the right vocation, uncertainty over how to face a perilous job market and downright fear of the unknown.

Fortunately, students at United Methodist-related colleges and universities are finding programs and people who can help them navigate the transition between academia and the next phases of their lives.

At Millsaps College in Jackson, Miss., the Faith & Work Initiative is in its 13th year helping students who are seeking to find, as theologian Frederick Buechner wrote, where their "deep gladness meets the world's deep hunger."

Open to all Millsaps students, the initiative brings together character development and career development in an academic setting. Students can earn a minor in faith and work. Offerings include a community service living-learning program with weekly fieldwork that challenges freshmen. In an interdisciplinary academic course called The Meaning of Work, students think critically about how they will spend their time and energy in the world. Internships allow sophomores, juniors and seniors to experience their chosen vocations in real-world work environments.

"In the internships, we place students throughout the community with trained and oriented mentors who are in a field that they think they may be called to," said Ann Phelps, director of the initiative, which began in 2000 with funding by the Lilly Endowment Inc.

Students also participate in vocational discernment or reflection groups. "One semester the class focuses on finding your deep gladness—what are your strengths and what are you called to do? How do you know what that calling is?" Phelps explained. "The second semester, the class is based on the world's deep hunger."

Create your own brand

In Salem, Ore, an aggressive program is under way at Willamette University to get students to prepare a career plan before they graduate.

Jerry Houser, associate dean and director of the Willamette Career Center, said The Career Roadmap program is an attempt to help students and to get rid of the image associated with most college career centers—that they are where students go to get their resumes and cover letters written and to look for job openings.

The roadmap prepares Willamette's students for a successful transition into the workforce. Faculty assign career-building exercises as part of their course requirements. However, the student-directed assignments do not affect course content, take up any class time or require any faculty grading or teaching.

Students complete 10 assignments that cover creating a profile, producing a resume and cover letter, practicing interviews and creating a professional brand that communicates their strengths.

Houser recommends that students consider three questions related to their careers: Who am I? What can I do with who I am? How do I get there? The career roadmap helps students answer those questions, often using online resources. 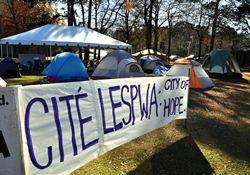 Following the 2010 Haiti earthquake, some students at Centenary College in Shreveport, La., moved into a tent city to raise awareness and funds for survivors. Engaging in such projects helps students meld their gifts, career aspirations and the needs of the world. Courtesy Sarah Backstrom.

Willamette's faculty has been supportive of the program, and Houser says students usually have two basic reactions.

"One is they are thankful, because they were forced to do what they should have been doing already, and they probably feel guilty about not doing it already," he said. "They all know they need a resume, and yet they will postpone it until an application is coming up. Then they hustle into our office and try to get something put together, rather than doing it thoughtfully."

Willamette's goal is for all students to complete a career roadmap prior to graduation.

Iowa Wesleyan College in Mount Pleasant requires internships for all students. A senior majoring in psychology and criminal justice, Jennifer Camarata has interned at two organizations. One later hired her,

Camarata's criminal justice internship was at a women's probation/parole office in Waterloo. Her psychology internship was at Insight Partnership Group, a privately owned company that serves individuals with disabilities in Mount Pleasant. Insight then hired her, giving her vital experience and more options after she graduates in May.

"For starters, it's in my field of psychology, and I'm working with individuals. So I get psychology every single day when I work," said Camarata, who is considering a graduate degree in psychology. "Whether I'm going to get another job in the future or if I'm going to grad school, I think it looks good on my resume: the fact that I had not only one, but two internships, and that I continued to work in that field while I was in school."

Whether she becomes a forensic psychologist or a clinical psychologist with a concentration in forensics, Camarata said her dream job is to teach college-level psychology and criminal justice.

"I think I'll definitely stay on through the summer. If things don't work out this year with grad school, I'll probably stay in Mount Pleasant and at Insight, and then go back to school the following fall," she said. "I feel pretty lucky. Some of my friends have struggled finding something that is within their field and what they want to do."

Gray wanted to study anthropology. Bennett did not offer that degree; however, its president at the time, Johnnetta B. Cole, is an anthropologist and became Gray's mentor. Gray created her own interdisciplinary curriculum in "Investigating Diversity in Cultural Anthropology." Having received a bachelor's degree in 2008, she set her sights on advanced degrees, including a doctorate in anthropology.

At first unable to gain admission to graduate school, Gray applied, and with Cole's help was admitted, to the University of Massachusetts at Amherst. 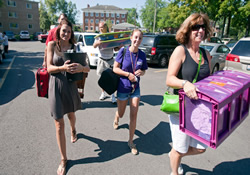 "I got my GED eight and a half years ago, and now I'm a Ph.D. candidate," Gray said. "It's been a long journey, but I just had a goal." She believes a doctorate degree will give her the credentials to speak about the experiences of her people.

"I came on this journey because I think that the invisibility of indigenous people in indigenous lands is a heartbreak," she said.

"As a Native person, to go through society and to be met with ignorance your whole life by even educated people, it's highly problematic to me," she continued. "My Ph.D. will be used to leverage my voice to speak on behalf of our communities with their permission."

Tom Gillem is a freelance writer and photojournalist living in Brentwood, Tenn.