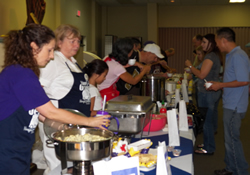 McKenney, a member of Aldersgate United Methodist Church, Slidell, La., has been crowned Iron Chef for the past five years at their annual Van Geaux cook-off. More than 150 people attended the October 2013 event.

Categories include appetizers, main dishes and desserts. Cooks range from kindergartners to older adults. As each chef displays his/her dish, tasters put money into bags by the dishes as part of the voting process. The person with the largest amount of money in his or her bag wins the category.

The idea emerged when the church sold cookbooks. When McKenney suggested that people cook from the cookbook, his idea blossomed into a cook-off. "I love to cook," he said. His wife, Kathryn McKenney, coordinates the event.

In 2013, the congregation raised $5,400, which they used to maintain three church vans. "Our church is big on missions," Kathryn said. Aldersgate members use the vans during eight to 12 mission trips each year. They provided outreach in Texas, West Virginia, Mississippi and Maryland and helped rebuild tornado-damaged homes in Oklahoma and Alabama. The church also uses the vans to transport people to special church events and vacation Bible school. 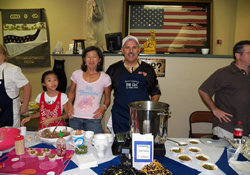 Competing in the cookoff brings families and friends together.
UCOURTESY PHOTO

"The cook-off is also an opportunity to welcome the community into our church," Kathryn said. She hopes visitors will attend worship at Aldersgate on Sunday mornings. The theme for the sixth annual cook-off in October will be "Meals and Wheels for Missions." Cooks will prepare their favorite holiday dishes.