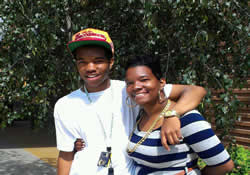 Christina Tellis enjoys time with her son Tahje -- one of her seven children.
COURTESY CHRISTINA TELLIS

Poverty isn't just financial or a lack of money, explains Christina Tellis of Dayton, Ohio. It's also a lack of resources and relationships.

Before joining the Circles USA program, Tellis didn't have a support network or a reason to think that she should even get out of poverty. But with the help of her circle of mentor friends, she was able to secure transportation and become an author. She also set goals to go back to school, get better housing "and to be a better person all around and be a better mother," says Tellis. The single mother of seven—five are still at home—now works with Dayton Circles through VISTA AmeriCorps.

Families living in poverty often have few resources to lift themselves above their situation. Food pantries help, and so do shelters, but those are temporary fixes for a larger problem that can affect generations. Children who grow up poor often do not see a way out and can become trapped in a cycle of poverty.

According to the National Center for Children in Poverty, 22 percent of children in the United States live in families with incomes below the poverty level. The Children's Defense Fund says 2,712 babies are born into poverty every day. 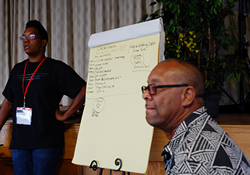 Christina Tellis was introduced to Circles as a life skills class participant and circle leader in Dayton, Ohio. Now she works with Dayton Circles through AmeriCorps VISTA.
CIRCLES USA/BRETT DUNCAN

Poverty also costs the nation. "Poverty and Education: Finding the Way Forward," a new report by the Educational Testing Service, notes the costs associated with child poverty total about $500 billion per year, or four percent of gross domestic product.

To help families break the cycle, Scott Miller founded what is now Circles USA in the early 1990s. Researching how people get out of poverty, he found many programs that address a piece of the recovery—but none with a comprehensive approach. Circles USA began as a unique venture to help guide families across the difficult bridge from poverty to a better life.

It works like this: Participants (called circle leaders) go through a life skills class that includes goal-setting. They then join their circle for 18 to 24 months. Each circle leader is matched with a couple of "allies"—middle- or upper-class mentors who offer friendship and advice, and help connect them to community resources.

"The ally is primarily a friend—somebody you can trust and count on," says Jill Foss, coordinator of Circles of Reno County and a member of Trinity United Methodist Churchin Hutchinson, Kan. The church provides some funding for the countywide group and hosts circle meetings.

"Our objective is to help people build that bridge out of poverty," says Foss. "It's a long and painful journey and nobody's alone on this journey." 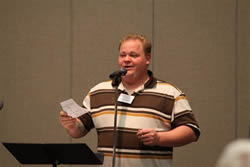 William and Christina McCroy started attending the Circles of Reno County "Getting Ahead" life skills class in August 2012. They attend the weekly circle meetings with their three kids, ages 2, 5 and 7. (Circles USA requires that dinner precede circle meetings and child care be provided during them.) The McCroys' goals included better budgeting and wiser spending. One of their allies is an accountant.

"He's been helping us get our finances together and showed us how to budget correctly," McCroy says. "He made a spreadsheet for us that has all the different categories of where we spend." By keeping track, they were able to determine where too much money was going.

"Before we started going, we were financially pretty bad off, but since we started Circles, I've gotten a better job, and we got a better house in a better neighborhood, and that's all because of the help managing our finances," McCroy says.

In addition, before Circles, the McCroys rarely did anything socially. "But now, we have friends that we do things with, we communicate better with other people and with each other," McCroy says.

During the life skills class, participants look at their relationships, what resources they have, how they're managing those resources, and what is their life reason and meaning. "They have the opportunity to build a plan and set goals," says Karin VanZant, national training coordinator at the National Circles Initiative training center in Springfield, Ohio. 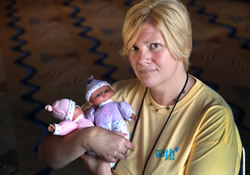 Then the circle leaders are paired with their mentor allies who help them develop budgets, write resumes, practice interviewing, and more.

"Allies do just about anything you would do for a typical friend," says VanZant, who also serves as an ally. When her circle leader, a grandmother raising her grandson, recently moved from subsidized housing in a tough neighborhood into a duplex in a much nicer neighborhood, seven allies helped her move.

Tellis' two allies are both retired teachers. "They have given me encouragement and support in going back to school, which is something I want to do in the future." The circle developed a plan to help her figure out when to return to school while raising five boys, ages 9 to 16, and what she wanted to study. She decided on creative writing or liberal arts. Tellis has already published a book, Built This Way, about overcoming struggles, and the joys of having God in her life.

Like the McCroys and their circle, Tellis and her allies' friendship goes beyond their weekly meetings. "We talk on the phone, we email, we meet—we are in constant contact," Tellis says.

Circle leaders typically come into the program by referral and word of mouth. Candidates are individuals or families already on a path to change who feel like they keep running into a wall, VanZant explains.

Circles USA focuses on making sure the program works. It has a national database on circle leaders, tracking how they improve their income, lower debt and start saving and make changes. Staff work with a third-party evaluator who helps determine if the model is working. 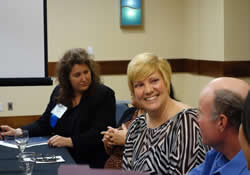 "We're able to show that both through the social capital that Circles provides as well as being connected to formal community resources, our circle leaders' lives are getting better," says VanZant. In her local Ohio Circles initiative, some circle leaders are now living independently from government assistance. Others have become debt-free, homeowners, or gone on to higher education.

"One of the biggest things that happened with me was taking a look at my situation and thinking—I can do better,'" says Tellis. "And I have this community of allies that can support me on my journey out of poverty."

Circling back to United Methodist roots

Circles communities are intentional and planned. Circles in Reno County started after a small interfaith team from Hutchinson attended a training session called Faith and Leadership Transforming Community, sponsored in part by The United Methodist Church.

The trainers challenged participants to identify a need that was not being met. After two years, the community group settled on Circles.

"We decided that it was a good fit for our community and would fill in some of the gaps left by the agencies, and was more of a long-term approach—rather than a Band-Aid, a quick fix—that would go to the source of the problem rather than [treat] a symptom," Foss says. Two years later, Circles of Hope-Reno County oversees seven active circles.

Circles USA has more than 80 communities in 24 states and Ontario. While Circles is not a faith-based program, churches frequently are part of efforts to bring it to their community and support it with volunteers, space for meetings or staff and financially. The California-Nevada and the Alabama-West Florida annual conferences are both working to establish Circles initiatives, reports VanZant.

With 13 Circles communities, North Carolina has more initiatives than any other state. Kansas and Ohio follow with eight each, according to the Circles website. 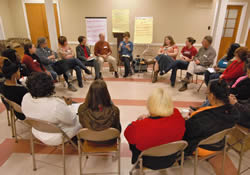 All circle leaders and their allies in Troup County in Georgia come together for an educational session during one of their weekly meetings.
COURTESY CIRCLES USA

"United Methodists in all the [Circle] counties have been key leaders," says Rice, who's also pastor of Crossfire United Methodist Church in North Wilkesboro, N.C., where there are a number of circle leaders. The General Board of Global Ministries has supported Circles with consulting by Jerald McKie, staff executive for justice and discipleship. The National Circles Campaign is approved for support through The Advance, United Methodism's designated giving channel.

"From a Wesleyan perspective, it richly parallels what [John] Wesley was doing at the Foundry—in that he was bringing together people of various classes," Rice says. He believes that is the secret to Circles' success: combining education with bonding and a strong social network.

"The stirring of the Spirit is a deep desire in the heart of God for us to have a balanced relationship not just with God but (also) with our neighbors," Rice says.

The way Circles gathers around families is what the church in Acts must have looked like, Rice continues, with people gathering and having conversations without division of class or race. "It's a time of fellowship and rich time of transformation," Rice says, both for those seeking to get out of poverty and the allies.

"Circles is like a family," McCroy says. "The best part is the sense of not being alone in anything and always knowing that someone's got your back."

Your Church Can Help Families Move from Poverty