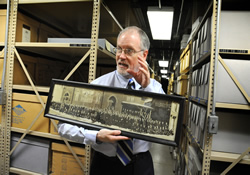 Teaching to give with gratitude and compassion nurtures generosity

United Methodists support missions around the world. You can find the cross-and-flame logo on schools, universities, community centers and seminaries across the United States. The United Methodist Church name is on the side of hospitals, retirement homes and a university in Zimbabwe, Africa. Men and women trained and commissioned by the denomination serve in mission in most nations around the globe.

While it takes significant funding to support denominational ministry, on average only 2 cents of every dollar given to local churches in the United States go to fund this expanse of ministries. Those pennies combine in seven apportioned funds, the budgets of which for 2014 total $150,078,000, to support the worldwide ministries and mission of the denomination and operations of the general agencies, 13 seminaries, 11 historically black colleges, bishops, the Judicial Council, ecumenical and interreligious ministries, and jurisdictional and General conferences. 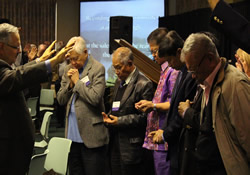 In the wake of Typhoon Haiyan, prayer is offered for bishops from the Philippines during the November 2013 meeting of the United Methodist Council of Bishops.
UMNS/ANDREW JENSEN

Of the remaining 98 cents, 7 cents supports jurisdictional, annual conference and district ministries and 6 cents goes to The Advance, World Service Special Gifts, Special Sundays and other recipients designated by the giver. The bulk of every dollar – 85 cents on average – stays in the local church.

Being connected through giving allows United Methodists to be a part of many ministries that few could do alone or even with several other congregations.

Appeal to compassion versus obligation

"The apportionment system is near and dear to my heart," says the Rev. Ken Sloane, director of stewardship and connectional ministries at the General Board of Discipleship. "United Methodists work together to do what an individual can't. As a result, we make an enormous impact on our world, such as attempting to eradicate malaria."

Sloane says a common challenge for local churches is "getting the message out to people that apportionments are not just a tax or something taken away from them."

"Many older generations grew up in the church with the understanding that tithing is a duty, obligation and commitment," he says. "However, younger adults are inspired to give out of generosity, compassion and commitment." 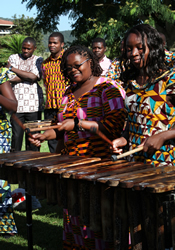 Sloane says congregations should talk about money and stewardship throughout the year.

"Churches should also help members stick their toes in the water of generosity," says Sloane, who writes offertory prayers posted on the Discipleship website, www.gbod.org.

"What the Christian faith teaches about giving is radically countercultural to an American society [that teaches to] value acquisition and consumption over generosity," says Ann Michel, associate director of the Lewis Center for Church Leadership at Wesley Theological Seminary. "The most fundamental challenge in encouraging adults to give financially is deprogramming them from a cultural mindset that causes them to think they constantly need more for themselves."

Teaching about apportionments needs to stress mission and ministry, not institutional maintenance, Michel continues. "We need to find ways to inspire our church members to want to support a ministry that extends beyond their local congregation.

"In my experience, the congregations that do the best job of forming people as givers are the ones where there is a culture of generosity."

Find causes about which youth can be passionate

"If youth are not aware of how their parents' budget works, and how they give to the church, they don't have a pattern of behavior to follow," says Chris Wilterdink, director of Young People's Ministries, General Board of Discipleship. "As a generational trend, millennials and younger give money to places where they understand how their money will make a difference."

"The church must clearly share its vision of ministry with young people in a way that is relevant and understandable to them," says Wilterdink. He urges congregations to invite young people into leadership and give them a voice in how church finances are used. "Transparency in how the money given will be used," he says, will encourage support from youth as well as from adult members.

"The church must show [members] tangible ways that its resources are being used to touch lives," says Dietrich Kirk, executive director of the Center for Youth Ministry Training in Brentwood, Tenn. Personal connections between givers and receivers are invaluable.

Provide opportunities for children to give

"For children to experience giving as an act of worship, they must be given the opportunity to give of their own resources," says the Rev. Dan Pezet, Rosinton United Methodist Church, Baldwin County, Ala.

"My family has used the jar method for years. Our boys have three jars labeled 'God,' 'Save' and 'Spend,' respectively. Their church offering comes from their 'God' jar."

His congregation also provides opportunities for children to give. A change-jar campaign invites youngsters to give change to Imagine No Malaria, Pezet says.

"Children need to see adults model faithful stewardship," says Melanie Gordon, director of ministry with children, General Board of Discipleship. "If you place your offering in the plate, let them witness this. If you send your offering electronically, let them sit at the computer with you, and talk to them about why we give to the church."

When the Rev. Chris Hemund began his appointment at Cornerstone United Methodist Church, Jonesboro, Ark., in summer 2012, the church was in serious financial crisis and had not paid any of its apportionments.

The church hosted a series of six "pow-wows with the pastor," during which members talked about the importance of paying apportionments. "We found a wonderful opportunity to educate our people," Hemund says.

The weekly newsletter then carried a section titled "All about Apportionments."

An annual country fair and auction raised $54,000 and with that income, the congregation paid half of its apportionments.

"That was the shot in the arm we needed," says Hemund. "The spirit of the church soared. Our church paid 100 percent in full by the first of December.

"Proper stewardship is becoming a part of our DNA once again."

"Here in the Alabama-West Florida Conference, we have faced various weather-related disasters," says the Rev. Bob McKibben, pastor of Daphne (Ala.) United Methodist Church, which pays 100 percent of its apportionments. 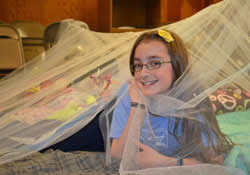 One of the best ways for children to learn to give money is to give from their resources. Kimberly Peacock looks out from beneath a mosquito net during a "sleepunder" at Columbia Falls (Mont.) United Methodist Church that raised money for the Imagine No Malaria campaign.
KAMI HEINZ

He recalls the damage caused by Hurricane Ivan in 2004 while he was serving Pine Forest United Methodist Church in Pensacola, Fla.

"After seeing and experiencing firsthand the greater church at work in the recovery, [the congregation] began to increase its apportionment giving from zero to nearly 100 percent. The congregation simply saw the importance of our connectional system and desired to be a part of it," McKibben says.

"Education is the strongest encouragement" when it comes to apportionments, he says. "I've found that misinformation is usually at the root of any lack of support."

In 2012, North Charleston (S.C.) United Methodist Church had not paid its apportionments for several years, says Linda Vaughan, the worship design team chairperson. "After looking over the list of things that the apportionment monies are used for, several people in key leadership positions decided something had to be done in our church to contribute our fair share."

By fall of 2013, when a campaign to educate the congregation began, the church "had paid a meager 6 percent of our apportionment," she says.

"By the end of December 2013, we were writing a check for the full apportionment!" exclaims Vaughan. This year the church will use funds raised from a "Tea Room and Silent Auction" and its annual fall bazaar to help pay its share. 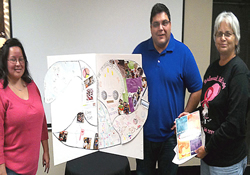 "The understanding and importance of giving has been evident in our communities for years," says the Rev. David Wilson, district superintendent of the Oklahoma Indian Missionary Conference. "The Native understanding of the circular nature of life enables many to know that our giving is natural and it always comes back to us in some form or another."

While the missionary conference has paid 100 percent of its apportionments for many years, Wilson notes that the support from apportionments helps supplement the "low salaries for Native American pastors." 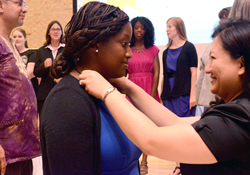 Kathleen Pryor (left) receives the anchor cross from Judy Chung as 29 young adult missionaries were commissioned and sent into service by the General Board of Global Ministries in August 2013.
GBGM/CASSANDRA ZAMPINI

The Garden Church pays its apportionments in full each year. Foor says while the older members of her predominately-Japanese congregation are accustomed to tithing, the younger generation is sporadic in its giving.

She also notes that while most Japanese members do not like to discuss money or receive recognition for giving money, it is a dishonor to the family if one does not give to the church.

"Research shows that church people know little about faith and giving," says the Rev. Lovett Weems, director of the Lewis Center for Church Leadership. "They have not rejected Christian principles of giving so much as never having learned them. We also know how difficult it is to find comfortable ways for people to discuss money."

Talk about how "the need for people to give as an expression of their faith is far greater than the church's need to receive funds."

Invite people to participate in "God's vision for your church to change lives and the community."

Emphasize stewardship of all possessions, not just the portion given to the church.

Give as much attention to helping members understand and address their personal financial issues as to the financial needs of the church.

Resources for discussing money and stewardship

How do we manage God's resources?

What did the Blanca Philippines Annual Conference do to increase its resources? We simply began giving what belongs to God — tithing. It is biblical, equitable and measureable.

Malachi 3:10 tells us, "Bring the full tithe into the storehouse, ... see if I will not open the windows of heaven for you and pour down for you an overflowing blessing" (NRSV). Tithing is giving back what belongs to God.

By moving from an apportionment/fixed allocation scheme to tithing local churches' income, giving in our conference increased dramatically — from an approximate total of $1,250,000 in 2005 to $2,250,000 in 2010! The totals include loose offerings, tithes, pledges and other contributions (except designated and restricted funds).

Districts in other annual conferences in the Philippines also adopted this practice, and their income improved significantly.