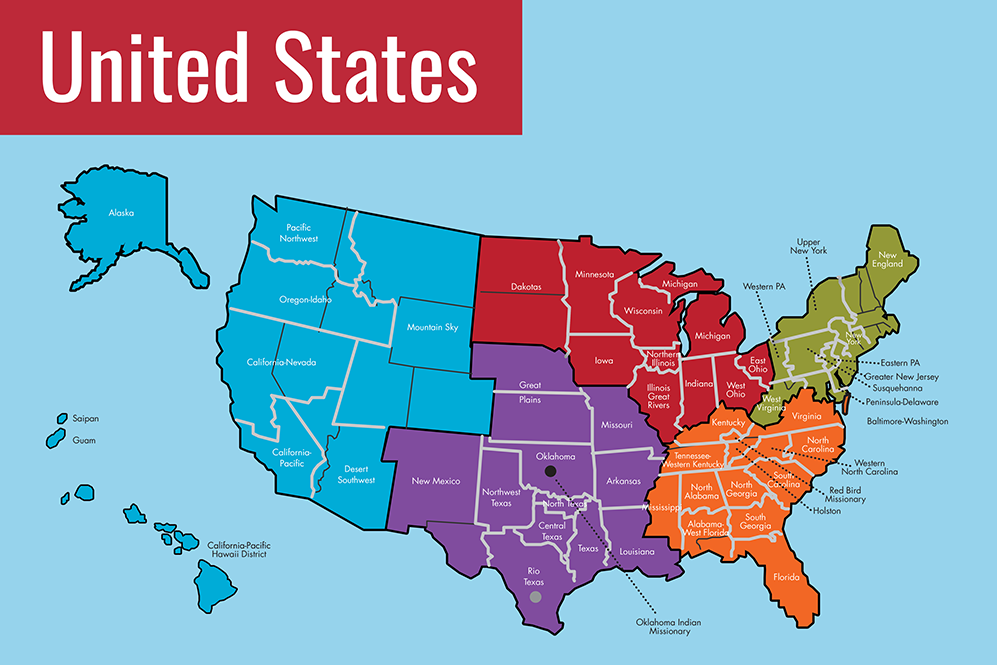 The United States is divided into five jurisdictions with 54 annual conferences and approximately 6.7 million people in membership. The jurisdictions are diverse within themselves, though some jurisdictions are perceived to be ideologically “conservative” or “liberal.” However, there are mixtures of people in every jurisdiction, and many groups do not fit within neat categories.

A key dynamic in the U.S. church has been the division over human sexuality which has been exacerbated by political divisions that have been growing over the past several years. There was racial backlash over the election of the nation’s first African American president. Racism against people of African descent and Asians, as well as growing xenophobia on the political right also have been on the rise. The murder of George Floyd at the hands of police and issues around police violence have garnered international attention.

More recently there have been challenges to democratic norms and a lean toward authoritarianism. The U.S. also is experiencing major societal fracturing, demonstrated most recently in the challenge to the integrity of the 2020 U.S. presidential election and the insurrection on January 6, 2020. Of issues also is the rise of Christian nationalism, white supremacy, and conspiracy theories such as Q-Anon. All of these factors have been impacting local churches and influencing the internal politics within the denomination. Many annual conferences and some churches within the U.S. are responding by addressing, in some form, the bishops’ call to dismantle racism or engaging advocacy in some form or another.

Many United Methodists also are focused on dealing with the devastation of a pandemic which has killed more than half a million in the U.S. Though the U.S. has had good access to vaccines, there are still those in the population who are vaccine-hesitant or who do not have access to the vaccines. Despite this, vaccination rates are high enough to begin to slow the spread. Businesses, schools and some churches are opening up.

The potential for some sort of separation over rights of LGBTQIA people is on the minds of many in the U.S., especially delegates and those in leadership positions within the general church and annual conferences. This has become an issue at the local church level to the extent that local churches feel they need to decide which way to go in case of a split. There are active conversations about how to help churches leave before the next General Conference. As well, there has been quite a bit of interest in legislation that will allow more regional governance within the U.S.

The U.S. also has very active caucus groups, including groups like UMC Next, the Legislative Strategy Group, Stay UMC Alabama, Good News, WCA units in annual conferences, etc. Though many assume that it is only conservatives who are discerning whether or not to stay within The United Methodist Church, the situation is far more complex and fluid. For instance, many young adults and seminarians are also considering leaving. Some have delayed their candidacy process as they discern. In addition, many who would consider themselves “conservative” want to stay and need assurance that there is a place for them in The United Methodist Church.

Within the U.S., the regional coordinating group will reach out to as a diverse a sampling as possible, prioritizing those who are often not at the table, especially people of color and young people. They also will reach out to groups already doing this kind of work. In addition, it will be helpful to work with jurisdictional college presidents to encourage jurisdictional gatherings in which invitees would engage questions about vision, identity, mission and connectionalism.

The committee has planned and coordinated regional conversations.