The General Board of Higher Education and Ministry (GBHEM), the leadership development agency of The United Methodist Church (UMC), formally launched Global Hubs for Leadership, Education and Development (LEaD Hubs) for Portuguese speakers and English speakers in areas of Africa.

The LEaD Hub for Portuguese speakers, in Maputo, Mozambique, and the hub for English speakers, in Johannesburg, South Africa, will address needs of Methodist-related projects, programs, and initiatives and promote education as well as leadership development opportunities within area churches and communities.

Decentralized Model for Leadership and Education
Rev. Dr. Kim Cape, GBHEM’s general secretary, explained that the LEaD Hubs are a decentralized model for the agency’s partnerships with local churches and annual conferences, in which GBHEM assists in the implementation of concrete projects based on the region’s needs and resources.

“A staff member of GBHEM may come to a place, but then leaves,” Cape said, “while the local leaders whom we train continue, commit to their communities and have a much greater impact.” 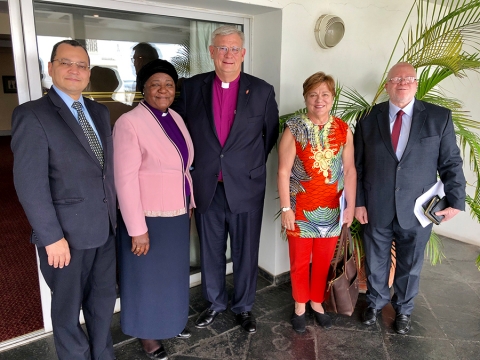 Launch ceremony for the LEaD Hub in Maputo, Mozambique
The launch of the hub in Maputo showcased the importance of GBHEM’s partnership with churches in Mozambique, Angola, Portugal, Brazil and other Portuguese-speaking countries.

The United Methodist Church in Mozambique has a long history of promoting literacy by investing in primary and secondary education. Bishop Joaquina Felipe Nhanala, who oversees the UMC’s Mozambique area, noted that the UMC has played a leading role in the country since 1890. “Many of the educators occupying important positions of leadership in the government and other organizations are United Methodists who are also actively engaged in their local communities,” Nhanala said. “In 2017, we began our involvement in higher education with the creation of the United Methodist University of Mozambique (UMUM). And now, with the launching of the LEaD Hub, we will be able to support all these initiatives.”

Successful Projects
Professor Rev. Dr. Jamisse Taimo, executive director of this hub, has already partnered with GBHEM on many initiatives in Angola and Mozambique. A training program on education and innovation matched students at UMUM in Cambine with businesses in the region of Inhambane. These pairings promoted entrepreneurship and positioned UMUM as a center for innovation.

The Global Chaplaincy Training Program, offered by the LEaD Hub in partnership with GBHEM, helped prepare leaders who will provide spiritual care at schools, clinics and other ministries maintained by the UMC in Angola and Mozambique.

A panel on “The Role of Methodist Schools in Promoting Environmental Education” inspired primary and secondary schools to explore joining the International Association of Methodist Schools, Colleges, and Universities (IAMSCU), and to partner with other schools to address issues such as climate change and food safety.

Contemporary Challenges of Education
Also featured at the launch event was a roundtable discussion on “The Contemporary Challenges of Education and the Role of the United Methodist Church: A View from Africa, North America, and Europe.” Participants included Bishop William McAlilly, Nashville Episcopal Area, United States, and president of the GBHEM board of directors; Rev. Dr. Jane Leach, executive director of the LEaD Hub in Britain; and Mr. Virgilio Jovane, former staff of UNESCO and other international organizations, and member of UMUM’s board of directors.

“One of the main challenges for Methodist education today is to reclaim the importance of ethics as part of a learning process that goes from cradle to grave,” McAlilly said. “The United Methodist Church needs to emphasize this point and exercise its prophetic voice, especially in view of contemporary politics, which seems to disregard moral principles.” 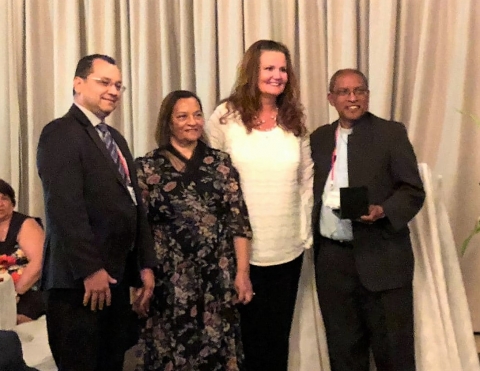 Launch ceremony for the LEaD Hub in Johannesburg, South Africa
The South Africa LEaD Hub in Johannesburg was formed as part of an agreement with the Methodist Church of Southern Africa (MCSA), under the leadership of Bishop Ziphozihle Siwa, and a partnership with the Wesleyan Methodist Church in Mozambique. Johannesburg is a strategic location for GBHEM’s work in Africa, providing easier logistics, lower costs, good partners, easy accessibility, safety and excellent infrastructure for pan-African initiatives.

The launch event began with a worship service, attended by participants in a concurrent joint conference of the African Association of United Methodist Theological Institutions (AAUMTI), the African Association of Methodist Institutions of Higher Education (AAMIHE) and representatives from other churches in the Wesleyan and Methodist traditions. The SinWa Choir sang several songs combining Wesley hymns with traditional South African and pan-African chants.

GBHEM’s associate general secretary for Global Education, Amos Nascimento, expressed GBHEM’s appreciation for Hendricks’ work, noting that the volume of activities and their complexities “demanded not only many days, but also many nights of work, which yielded very positive results.”

About GBHEM LEaD Hubs:
GBHEM has 11 LEaD Hubs throughout the world as part of its strategic plan to better serve the global UMC in the preparation of leaders and difference-makers who change the world. GBHEM has been establishing a decentralized structure since 2004, when it launched the Methodist Global Education Fund for Leadership Development. Today, the LEaD Hubs serve in the following locations:

About GBHEM: As the leadership development agency of The United Methodist Church, the General Board of Higher Education and Ministry’s mission is to build capacity for United Methodist lay and clergy leaders to discover, claim and flourish in Christ’s calling in their lives, by creating connections and providing resources to aid in recruitment, education, professional development and spiritual formation. Every elder, deacon and licensed local pastor benefits from our training and candidacy programs. Many young adults find help in clarifying their vocation and God’s call on their lives through our leadership and discernment programs. Follow us on Twitter and Facebook: @GBHEM.