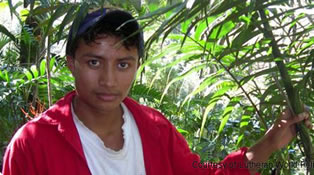 Eco-Palms will again supply fairly traded palm fronds harvested in Guatemala and Mexico. The palms must be ordered at least four to five weeks before Palm Sunday, March 24 in 2013.
COURTESY ECO-PALMS

Every January, people resolve to do better in the new year: eat right, exercise more, save for retirement.

But there's one other resolution United Methodists and their congregations can add to that list—buy fair trade.

Oakhurst United Methodist Church in Decatur, Ga., already does and plans to do more.

"It is eventually our intent to move everything to Equal Exchange," said the Rev. Tim Lloyd, the church's pastor.

That means buying coffee and other products for all church functions from the fair-trade supplier.

Doing so helps ensure the laborers and farmers who provide those products receive a fair wage, said June Kim, hunger and poverty executive for the United Methodist Committee on Relief (UMCOR).

"Fair trade is one of the many ways United Methodists can engage in using our consumerism in a socially just way," she said.

To be considered fair trade, a company or cooperative must meet globally recognized criteria and operate under specific principles, such as abiding by child labor laws. In addition to providing a fair wage to its workers, it must be democratically run, show care for the environment and use some of its proceeds to revitalize its community.

UMCOR has been encouraging churches to buy fair trade since 2000. For a little more than 10 years, the agency has partnered with Equal Exchange, which specializes in fairly traded coffees, teas, chocolates and cocoa, olive oil and almonds.

Oakhurst Church members sell the coffee on Sundays to raise money for the church's new social justice ministry. They also bought chocolates to sell to parents before Halloween. And in December, the church held a holiday bazaar featuring products from local artisans and fair-trade vendors.

"(We are) trying to take small steps in the community to build an understanding and identity that the (church) community is going to seek, through buying habits, the kingdom of God and try to act justly in whatever small ways we can, even down to purchasing chocolate," Lloyd said. 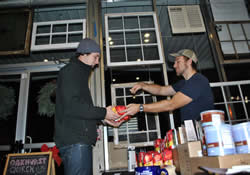 He added that it is an important part of the ministry of the new church, which launched in August 2011.

"I've said things like ... as a new, small and growing congregation, let's begin to practice things that, though they may not seem like a big deal, are an important step in the right direction," he said.

Putting a face to fair trade

One Sunday a month, they sell Equal Exchange products to raise money for the church's mission trips to El Salvador. For several years, teams have been traveling to the country to provide free medical services and help a local congregation build a medical clinic.

"One of the ways we wanted to bring awareness to the plight of the people of El Salvador is to talk about fair-trade products," the Rev. Mollie Bame Reddic, associate minister, said. "When we tied it to our ministry ... I think that made a huge difference because people have a relationship with the people there and we put a face to it."

The coffee is also served during the church's alternative service, and Sunday school leaders are encouraged to buy it for their classes.

"A lot of people compare (the coffee) to Starbucks and say they'd rather pay us for it and raise money for (the mission trip) than pay Starbucks for it," she said.

UMCOR also partners with Prosperity Candle, Eco-Palms and SERVV, which markets fair-trade crafts and foods made by low-income artisans and farmers. Eco-Palms sells palms harvested in Mexico and Guatemala for use in Palm Sunday services (March 24), while both Prosperity Candle and SERRV offer food and gift items that can be purchased individually or on consignment for resale at special events. 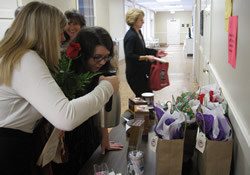 While other companies and a growing number of retail stores sell fairly traded products, Kim said the UMCOR partnerships take the guesswork out of buying fair trade.

"UMCOR has vetted the process for them," she said. "These are not companies just driven by profit, but there is a whole social justice aspect of it that tries to ensure equity for all the people who are involved in that cycle of bringing that produce from the field to our table."

For every purchase United Methodists make through UMCOR's partners, UMCOR receives a contribution that goes toward its sustainable agriculture and development program, which supports small farmers in Africa. More information about the program and UMCOR's partners is available at www.umcor.org.

United Methodists can buy coffee through the UMCOR Coffee Project at www.interfaith.equalexchange.com. Hope's Blend, a new coffee, was created in honor of the Coffee Project's 10th anniversary and introduced at General Conference 2012.