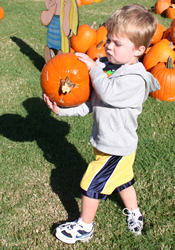 The kids-only section is a favorite part of the Pumpkin Patch at Southern Hills United Methodist Church in Tulsa, Okla.
COURTESY PHOTO

In the midst of final preparations for vacation Bible school and summer missions, fall can seem far away. For churches considering adding a pumpkin patch to their ministry, the time to start preparing is now!

For the past 17 years, Southern Hills United Methodist Church (www.shumc-tulsa.com) has sold pumpkins on the church grounds.

Katie Alfred has coordinated the church's pumpkin patch for the past four years.

She said Southern Hills receives their pumpkins, gourds, Indian corn and mini pumpkins from Pumpkins USA, a company that works with the Navajo Agricultural Products Industry. The pumpkins arrive the second or third week of October and the pumpkin patch is open every day of the week from 9 a.m. to 7 p.m. If the weather cooperates, the church also sells bales of hay and corn stalks from Oklahoma farmers.

A children's story tent and an adult-free pumpkin patch, where children can pick out their own pumpkins, are other attractions. A "science area" displays several types of pumpkins and a pumpkin cut open so children can see and feel the inside.

Alfred said the church also has a "Trunk 'r Treat" event a couple of days before Halloween, where children can play in the pumpkin patch, jump in rented bouncy castles, play games, participate in a costume contest—and collect treats from people standing beside their decorated car trunks.

"Volunteers are the heart of the patch," Alfred said. "During peak selling times, we have at least two volunteers per three- or four-hour shift, and at least one person to read stories and one person to oversee the children's pumpkin patch."

Alfred recruits volunteers through Sunday announcements. She also enlists high school and college students who receive credit for helping church members set up tents, fences and pallets for the pumpkins.

In 2012, Southern Hills, which averages 62 people in worship, earned about $3,700 from the patch to use toward missions.

Open throughout October, Tallahassee Heights United Methodist Church's pumpkin patch (www.heightsumc.com/missions) has served its community for the past 26 years. 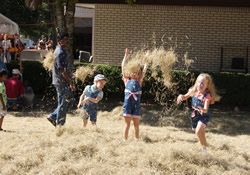 Showers of straw are created as youngsters play in the Pumpkin Patch at Tallahasee Heights United Methodist Church in Florida.
COURTESY PHOTO

It began in 1986 as a way to raise money for missions. It still does. In 2012, the church, which has an average attendance of 218, raised $48,000 from the patch to use toward missions and provide start-up funds for the next year, reported Beth Andrews, the church's administrative assistant.

Each Saturday, the church adds an event, such as a health fair, an animal-appreciation event, safety-awareness classes or a craft bazaar along with pony rides, bouncy houses, games, face painting and concessions. The church's praise-and-worship team, choirs from the local colleges and other groups provide music.

Andrews, who has been a patch volunteer for the past 17 years, said, "Warm and friendly patch ambassadors greet visitors, offering smiles, assistance and a listening ear or word of encouragement and prayer. The pumpkin patch has opened up wonderful friendships in our community."

Volunteers staff the patch Monday through Saturday, 9 a.m. to 9 p.m. However since it is located in an open area, customers may visit at any time. Andrews said the patch functions on the honor system, providing a sample price list and a lock box for payments.

"As guests roam among the pumpkins, they will find signs tucked all around with Scripture verses and sayings of encouragement," she explained. "This past year, we had prayer volunteers available on Saturdays to pray with anyone who had a need. We gathered written prayer requests, which were lifted up by our three weekly prayer teams.

"The pumpkin patch has opened up wonderful friendships in our community."

Tips for a successful pumpkin patch