Ministry's great minds often take learning vacations together during the summer at camps and Christian retreat centers. Yet, even if your family and friends cannot afford a trip this year, you can still offer one at (or near) your church that feels like a group getaway.

Research and find a camp, Christian retreat center or Chautauqua

Much thought goes into the programming every June through August by individual leaders of the 207 locations and offices within the United Methodist Camp and Retreat Ministry. The ministry serves more than one million guests annually, and 17 faith-based facilities offer programs in the Chautauqua Network on the Chautauqua Trail. They arrange their schedules from six to 12 months ahead of time, but you could organize yours in hours by using many of the resources on their websites. 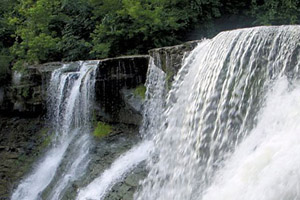 Chautauquas are spiritual learning centers, but they are not affiliated with any one denomination. They were inspired by Methodists in 1874, when John Heyl Vincent and Lewis Miller rented the shores of Lake Chautauqua in western New York after a Methodist camp meeting. They first wanted to train Sunday school teachers, but soon enrolled other students.

Chautauquas feel like villages, because they were designed as planned summer towns. While they only operate for about nine or fewer weeks each year, the largest have chapels, auditoriums, hotels, restaurants, shops and even movie theaters around neighborhoods.

If you decide on having a Chautauqua-like weekend, select sites like these where you can gather in your community for an hour or two for certain activities. Then, make reservations and reserve the church bus just for that day so you can transport everyone.

The United Methodist Camp and Retreat Ministry has "seven foundations" for worship at its day, mission or resident camps based on its purpose and priorities. These carry over into their "seven foundations of Bible studies" to teach from along with leading devotions .

When you've set your meeting date, time and location (Foundation 1) for your retreat, then you can start on the agenda that extends genuine Christian hospitality and community (2), nurtures faith and discipleship (3), promotes spiritual leaders (4), teaches creation appreciation (5) and inspires your guests toward love and justice (7).

Chautauquas also have "four pillars" of programming: religion, education, cultural arts and leisure. They seek to build community and lay a foundation for people to develop intellectually, spiritually, emotionally and physically. Since they have been around for generations, Chautauquas are where "families of faith" also bond in their relationships to God and each other by visiting the same summer houses on the property year after year.

When the Chautauqua Movement reached its peak in 1915, adults were learning skills under tents and in halls within nearly 12,000 communities across the U.S. By the Great Depression in the 1930s, many Americans were too preoccupied with changes in the nation's economy, gender roles in society, World War I and technology to take summer learning vacations.

Like United Methodist camps and Chautauquas, your retreat will want to bring the lives of your group into balance with play, study and volunteer work. You may even do all three in one activity, or with several, during a weekend, when you are inspired by their programs:

1. Nature and Bible Study. Have an "environmental stewardship" day, by taking a bird habitat-making walk, nature clean-up hike or a reforestation project with saplings or seedlings. The Lakeside Environmental Stewardship Society also works with junior naturalists, who have discussions about God and creation.

2. The Art of Prayer and Getting Well Versed with Drama. Have a sandpainting class, using Scripture that illustrates how Jesus wrote in the sand, like they do at the Chautauqua Institution. Or teach a 15-minute language lesson in beginning Hebrew by a Jordan-like river. You can also set a timer to draft a 10-minute play on a character from the Bible for improvisational acting outdoors.

3. Sports and Spiritual Growth. Worship in the backyard by the pool, as they do at Monteagle (Tenn.) Sunday School Assembly, or have a Prayer Breakfast at Wimbledon and then view the finals on TV of the tennis tournament. During the Tour de France, start a bike-riding competition, recording your distance on a mock mileage map of the Holy Land.

4. Centering on God and Crafting. Bring in a calligraphy or paper-cutting instructor, as Ocean Grove Camp Meeting Association does to make a framed wall print of the Psalms or a design around images from the Bible.

5. Light of Jesus. Have a fireworks display around the concept of lighting the world with your faith. Or, make a roaring campfire with barbecue, hayrides and s'mores for Neighbor Night like they do at Lake Okoboji in Spirit Lake, Iowa, or have a family forum about how peace and justice are ignited.

6. Missions and Music. Volunteer your talents for a weekly summer music series, before, during or after you serve at a rescue mission or minister to a nursing home.

7. Communicating in Christ/Challenge Course. With nylon ropes and plastic chains, think how to break boundaries based on the love of Christ. They adapt many team problem-solving themes to the Challenge Course at the Birchwood Camp in Chugiak, Alaska, using materials like boards, tires and ladders.

8. Discipleship Training. Go fish, and study Jesus' disciples who did while baiting hooks and casting lines for each other as they do around the lake at Camp Istrouma at Greenwell Springs, La. Begin a Father and Son Catfish Tournament with devotionals by an outdoor guide, which they have at Bayshore Camp in Sebewaing, Mich.

Patricia Bates is a freelance writer for United Methodist Communications.