A (brief) history of the people of The United Methodist Church

A United Methodist ... has a story

The United Methodist Church in 2017 is a product of a worldwide mission that began some 300 years ago. It starts in England, travels to the American continent with the colonists and quickly spreads around the globe. 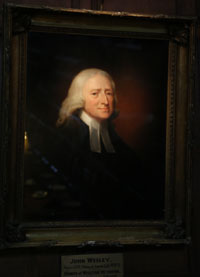 This oil portrait of the Rev. John Wesley hangs in the Great Hall at Christ Church Cathedral in London. Photo by Kathleen Barry, United Methodist Communications

An Oxford Fellow, John Wesley was ordained a priest in the Church of England in 1728. He and brother Charles were sons of an Anglican clergyman the Rev. Samuel Wesley and Susanna Wesley, a woman of great strength, faith and character. In 1729, Charles Wesley formed a small group at Oxford, known as the Holy Club. John soon became leader of the group, which he later regarded as the first expression of Methodism.

As he led others, John struggled with assurance of his own salvation. In 1736, the Wesley brothers embarked on an ill-fated missionary trip to Georgia. John left Georgia in disgrace, but with deep admiration for the Moravians he met on the voyage to America.

On May 21, 1738, Charles had a life-transforming experience. Three days later, on May 24, during a service at a church on Aldersgate Street in London, John felt his heart "strangely warmed" and became assured of his salvation. Soon after, his friend and revivalist George Whitefield convinced him to preach in the fields. John was soon preaching to miners, farm workers, day laborers and others who often found themselves less than welcome inside church buildings. John organized the converts into societies, bands and classes. He began training lay preachers to lead them. In 1744, John initiated the first annual conference to bring together his preachers.

As the movement grew, so did pressures to separate the Methodists from the Church of England. John Wesley refused – and remained an Anglican priest until his death. The Wesleyan movement spread to America and in 1771, Francis Asbury arrived to begin 45 years of ministry, much of it to people on the frontier. Among those with whom Asbury bonded was Philip William Otterbein, a German clergyman. Emigrating from Ireland and providing leadership to what would become the Methodist Episcopal Church were Philip and Margaret Embury and Paul and Barbara Heck. New York's Wesley Chapel opened in 1766. It is still an active congregation – John Street United Methodist Church. The first annual conference was in Philadelphia in 1773. William Watters became the first native-born American itinerant preacher.

John Wesley utterly opposed the American Revolution. In the aftermath, with American Methodists having few options to receive the sacraments, Wesley appointed lay preachers Richard Whatcoat and Thomas Vasey for ministry in America and commissioned Thomas Coke as superintendent of America's Methodists. Wesley charged Coke to commission Asbury to serve with him as Wesley's deputies. Asbury refused to accept the assignment unless he was elected by the free vote of the American preachers. His election came in the Christmas Conference of 1784, and the Methodist Episcopal Church was born. 1785 saw the first Book of Discipline published. 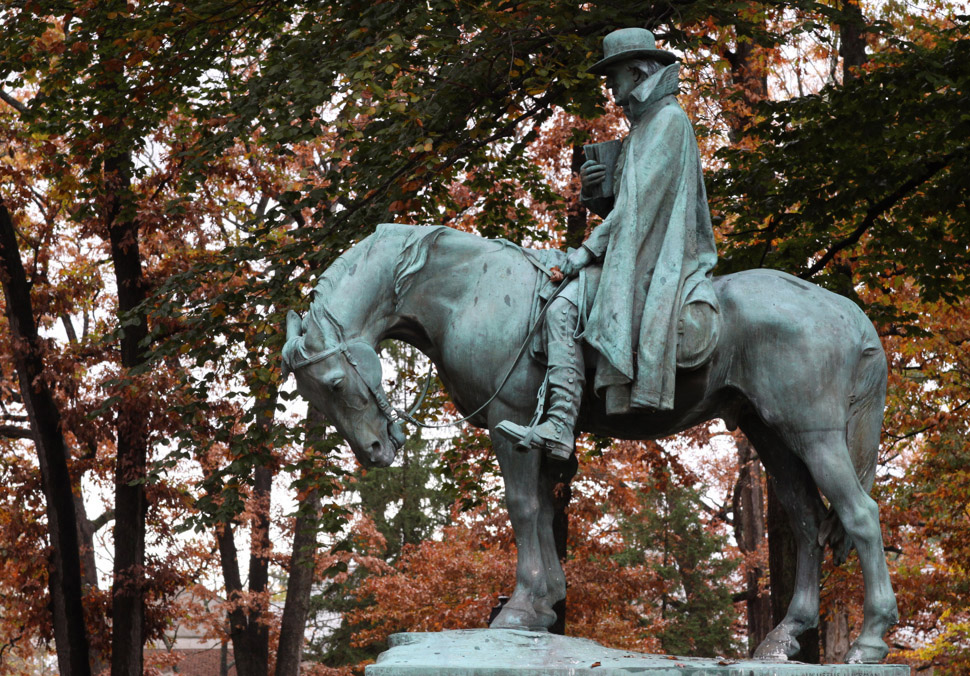 This statue of Bishop Francis Asbury on the campus of Drew University in Madison, N.J. Photo by Kathleen Barry, United Methodist Communications

Asbury, now calling himself bishop, was the undisputed leader of the American Methodists until his death in 1816. 1808 brought the denomination's first Constitution, a publishing house and revivalism and camp meetings to draw new converts.

American Methodism was part of The Second Great Awakening. Local churches and classes sprung up wherever a few women and men gathered under the direction of class leaders and lay preachers. Ordained circuit riders visited regularly and administered the sacraments. The Sunday school movement began to flourish.

In the same years, divisions over slavery deepened resulting in schism at the 1844 General Conference. In 1845, delegates from the Southern states organized the Methodist Episcopal Church South. It was not the first division in the young church over social and theological issues. The Methodist Protestant Church was founded in 1828 and The Wesleyan Methodist Church in 1841.

The American Civil War took a heavy toll, especially in the South, although both churches eventually rebounded. The Freedmen's Aid Society and the Colored (now Christian) Methodist Episcopal Church organized to serve the newly freed slaves. The Methodist Episcopal Society organized in Denmark, and the Free Methodist Church of North America began in New York.

The push began for increased participation in decision-making by laity and women.

In 1898, Bishop Joseph Crane Hartzell stood atop Mount Chiremba in then Rhodesia and dreamt of hundreds of African youth running to school in the valley below.

In 1908, the Methodist Episcopal Church adopted The Social Creed to express outrage over the miserable lives of millions of workers.

Missions extended into Burundi and Rwanda. The North Africa Provisional Conference was established.

In response to World War II's devastating effects, the 1940 General Conference of The Methodist Church approved forming the Methodist Committee on Relief.

The Methodist Church was increasingly concerned with the issue of racism in the church and United States. While earlier General Conferences considered proposals to eliminate the Central Jurisdiction, it continued until its abolition became part of the proposed union with the Evangelical United Brethren.

In 1968, General Conference approved the proposal to create The United Methodist Church. Merging and reorganizing structures followed. Many of today's general agencies had their beginning.

Meanwhile, congregations flourished in Taiwan and Zambia. The European Methodist Council, the Council of Evangelical Methodist Churches of Latin America and the Burundi Conference were established.

Hartzell's dream of African youth running to school took a step toward reality when General Conference 1988 approved establishing Africa University in Old Mutare, Zimbabwe. Opened in 1992, it continues to draw a diverse body of students from throughout Africa.

The church continues to experience change and increasingly knows itself as a world church with members and conferences in Africa, Asia, Europe and the United States. While membership in Europe and the United States has declined, it has grown significantly in Asia and Africa. The church endeavors to become a community in which all people, regardless of racial or ethnic background, can participate in every level of its connectional life and ministry (The Book of Discipline, Historical Statement, p. 22).

In 2012, the General Conference participated in "An Act of Repentance toward Healing Relationships with Indigenous Peoples." The church also entered into communion with several historically African-American pan-Methodist denominations, made United Methodist Women an autonomous organization and created a national ministry plan for Pacific Islanders in the United States.

General Conference 2016 approved five new bishops for Africa in 2020 and provisional central conferences in Southeast Asia and Mongolia and a provisional annual conference in Rwanda. For the first time, a member from outside the United States, N. Oswald Tweh Sr., a layman from Liberia, is president of the Judicial Council, the denomination's "supreme court". He will hold the office until 2020.

Views on human sexuality continue to be divisive in the worldwide church. General Conference 2016 accepted a Council of Bishops' proposal to defer debate on these issues until after a period of study and discussion by a special commission. A special General Conference dedicated to the topic has been called for February 2019.