Are you snapping your teens? A case for Snapchat in church

My passion, my ministry as a deacon, is helping churches to leverage technology to the glory of God. One of the promises of social media is that it allows us to meet people where they are, both literally and figuratively. Some of the people, particularly teens, are on Snapchat. The fun, casual nature of Snapchat lets you build the kind of intimate relationships people claim can never happen online. These sorts of relationships are the kind that churches greatly desire within their communities and with God.

In my 12 years of teaching social media, I have yet to witness the sea change to a social media network that I have seen with Snapchat.

Last fall, I taught a class called "Transcending the Black Mirror" at Wartburg College, a private ELCA-affiliated school in Waverly, Iowa. It was among many themed "critical inquiry" classes; every freshman is required to take one. Mine taught critical thinking by evaluating social media culture and digital citizenship.

Snapchat is just what the name suggests -- a chat platform that prominently features images. In fact, when you open up Snapchat on your phone, it defaults to camera mode. Not even picture-based Instagram does that. With one click, I can reverse the camera into selfie mode. Snapchat excels at selfies.

Expiring content! This is what set Snapchat apart from the beginning. Your posts expire, meaning less chance of getting caught doing something foolish. There are two sides to this coin. On one hand, it lightens the burden of feeling like you need to be perfect online.  On the other, it emboldens users to harass, bully and sext. In the end though, expiring or disappearing content is an illusion! From the beginning, people have figured out how to save snaps. Now Snapchat has built "save" into its interface. Choosing the infinite stopwatch icon will make your posts permanent on your end, and let users save snaps on their end.

BitMoji. Bitmoji is a companion app for making customizable emojis that look like you. Snapchat then uses that information to dynamically make emojis of you for just about any situation. It's smart enough to offer suggestions based on what you are typing and will even include the recipient's bitmoji in partnership with yours. Keep reading for an example.

Geofilters. Face-swapping and turning you and your friends' faces into dogs and cats were popularized by Snapchat filters. There are apps for doing this alone, but what makes the filters special in Snapchat is that they turn on when you are in a certain location. One of the popular ways to advertise on Snapchat is to sponsor a Geofilter. For instance, during finals week last fall, Red Bull sponsored Geofilters at many colleges, even at my 1600-student Wartburg! 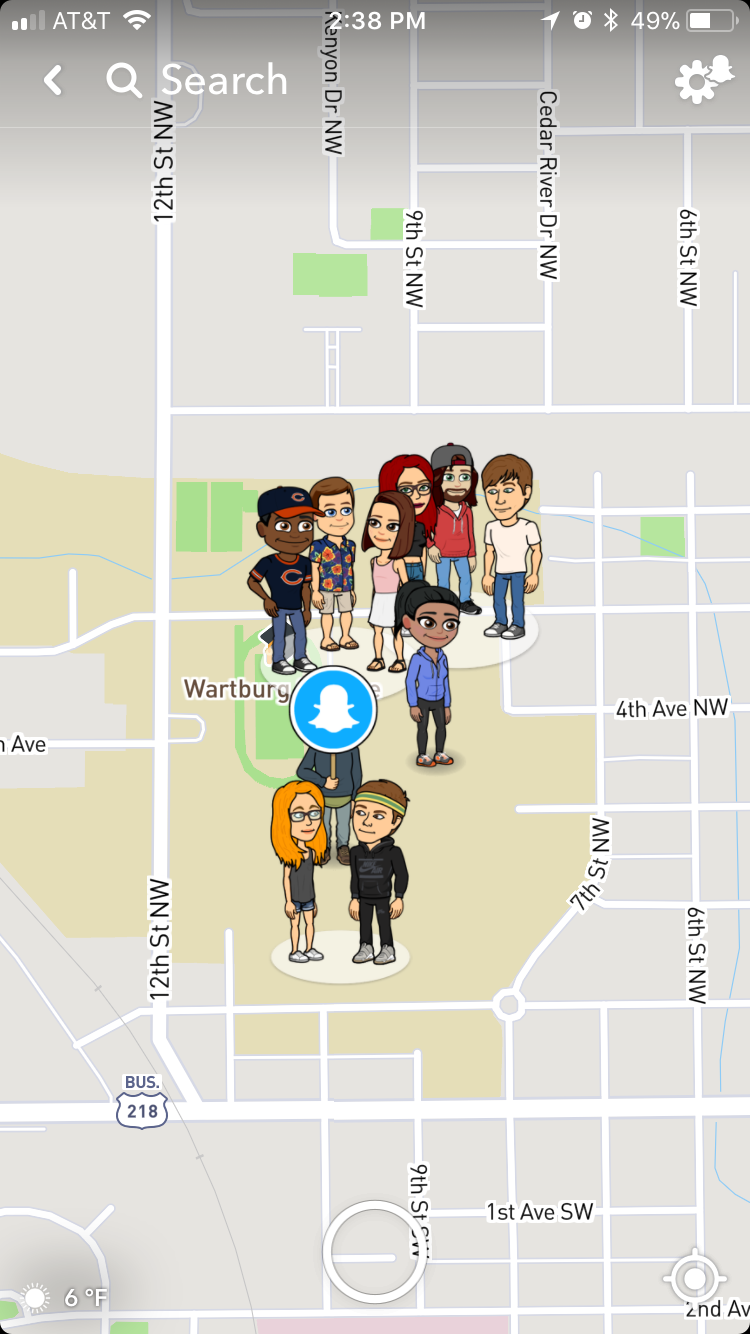 Snapchat map with Bitmojis of where my students are on campus.

Others. Snapchat has a controversial map of where your friends are. It's one thing to set up Find Friends with your family in Apple's iOS, but I could tell where and why my students skipped class. Needless to say, attendance was exceptional. Snapchat also has featured stories (mostly brands), and local stories (mostly local users), which are interesting, but not too different from those on other platforms. And, as with other platforms, you can create groups. Snapchat is the only platform I know of that issues a notification on your phone when someone starts typing a response to you.

Mobile only. Finally, it should be noted that Snapchat is just for mobile devices, it only comes in app form.

According to The Associated Press-NORC Center at the University of Chicago, 75% of 13-17-year-olds use Snapchat, confirming that my class of 18 year-olds was not an anomaly. If you want to connect to teens, this is how you do it. I'll add that Instagram shares similar adoption rates, but it didn't register as strongly with my students.

In terms of user base, Snapchat is still growing, although it is plateauing somewhat. As with any other social media platform, the users are fickle and predicting it’s future is hard to do. Snapchat slowing in growth could turn into a downward trend or it could just mean that Snapchat has reached saturation. Regardless, it’s popular now, so it would serve the church to understand why teens like it so much and to learn how to take advantage of its innovations.

I had planned to run the online class discussion through a closed Facebook group. That had been successful with upperclass students. However, after the Snapchat-preference revelation, I was committed to building the class community through snaps.  Granted, every student in the class had a Facebook account (it's still a rite of passage for 13-year-olds), but few said they check Facebook regularly.

My students all agreed the key reason they liked Snapchat was because "It's fun." Reading between the snaps, this is why I think they think it's fun!

It offers the illusion of privacy. A couple of my students accidently posted a video to the class in which they were horsing around in a sexualized manner. It was more embarrassing than inappropriate for 18-year-olds. When I brought it up in class, they laughed it off. They knew they had made a mistake, but they didn't regret the fun they had making the video. Snapchat users have the ability to save videos in Snapchat. While the default is that they expire, I have no doubt that some of the students saved the video, if anything, to lord it over their friends down the road. Despite this, users are emboldened to be themselves on Snapchat, because nothing feels permanent. Which leads me to…

"There's something about talking in cartoon that makes it hard to be mad or tense in virtually any human interaction."

You can be a cartoon. The power of having your customized Bitmoji that smartly adapts to your situation is super cool, even for this older gentleman.

There's something about talking in cartoon that makes it hard to be mad or tense in virtually any human interaction.

You can be casual. Social media networks typically encourage perfection; just the right wording, just the right framing for your selfie. Because it's not live, and despite the fact it's easy, we are calculated in our use of social media. You might be taking a picture of your mac and cheese dinner, but it better be the best representation of it, with perfect plating or, at the very least, extra irony. Having said that, the camera function in Snapchat doesn't even have the fancy auto focus features that the standard iOS camera app has. It sacrifices precision for speed. You get a notification that someone is responding to a Snap when they start typing, making it feel more like a real-time conversation. Snapchat is very low key, as social media goes.

It's NOT political. Sure, you can talk about politics on Snapchat, but consider all of the political arguments you've had online. (If you are like me, it's more than you are proud of.) The source of any protracted political argument is the capacity to go back and carefully examine the arguments that have already been made. Even if you save some posts, you'll never have the full picture to refer to, meaning you'll never be able to make a killer argument. So, why do it in the first place?

So … you need to be on Snapchat

My class was one of 14 sections. Each section was evaluated by the same person. The main piece of feedback I received from the reviewer was how impressed she was by the openness in my class: The students weren't afraid to speak up and they had a great rapport with their teacher and with each other. I'd like to take credit for that, but honestly, I think it had more to do with Snapchat.

We used Snapchat for everything, including daily discussions that lasted into the night. Its impermanence makes it problematic for pedagogical (teaching) reasons and for safe sanctuaries reasons, but it was great for building and maintaining relationships between myself and the students, and between the students themselves.

Earlier I joked that my students attended more because I knew where they were. I wasn't cyber-stalking them. In reality, I think they came because the fun we were having online seeped into the class. We had a stronger community because of Snapchat.

The kind of impact that Snapchat had on my class can translate to any youth group or small group or pastoral care relationship. Next time, I'll share my thoughts on how churches can leverage Snapchat for ministry (part two) and the safe sanctuary implications of using a private social media network.

You can now follow The United Methodist Church on Snapchat.

New to Snapchat? No problem! To follow are step-by-step instructions to get you started.: 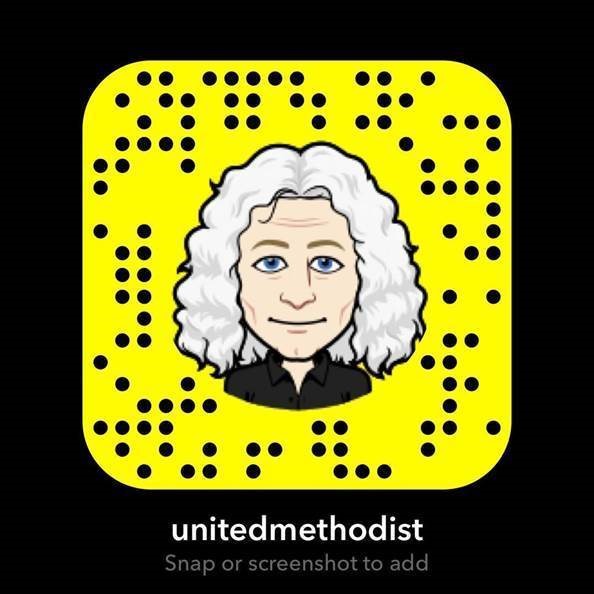 We look forward to having you join us as a part of The United Methodist Church Snapchat community!

— Wil Ranney is an Ordained Deacon in the United Methodist Church who specializes in technology ministry. He helps churches, pastors, and social entrepreneurs to leverage the Holy Spirit through techniques pioneered by internet startups. Read his blog at URLoved.com.