Easter — Reveling in the Resurrection

With all the Lenten and Holy Week traditions and the excitement surrounding the main event — a glorious Easter Sunday celebration — the weeks immediately following Easter can sometimes seem ordinary, dull, a great letdown. However, Easter lasts for six weeks, seven Sundays on the liturgical calendar, offering time for continued wonder and celebration. After all, it was after the Resurrection that Jesus appeared to the disciples and others, encountering them in their daily lives.

The "Stations of the Resurrection" devotion, also known as "Via Lucis: The Way of the Light," includes Scripture readings, meditation and prayer, according to the blog Plastic Beatitude. Typically, the devotional journey has 12 or 14 stations, which feature 11 appearances of Christ plus the "Ascension into Heaven," "The Disciples Waiting in Prayer" and "Pentecost." The Plastic Beatitude offers art, Scripture and commentary for each of the 14 stations.

The "Stations of the Resurrection" was first introduced to some Roman Catholic communities in 1988, but it is newer to Protestant congregations. 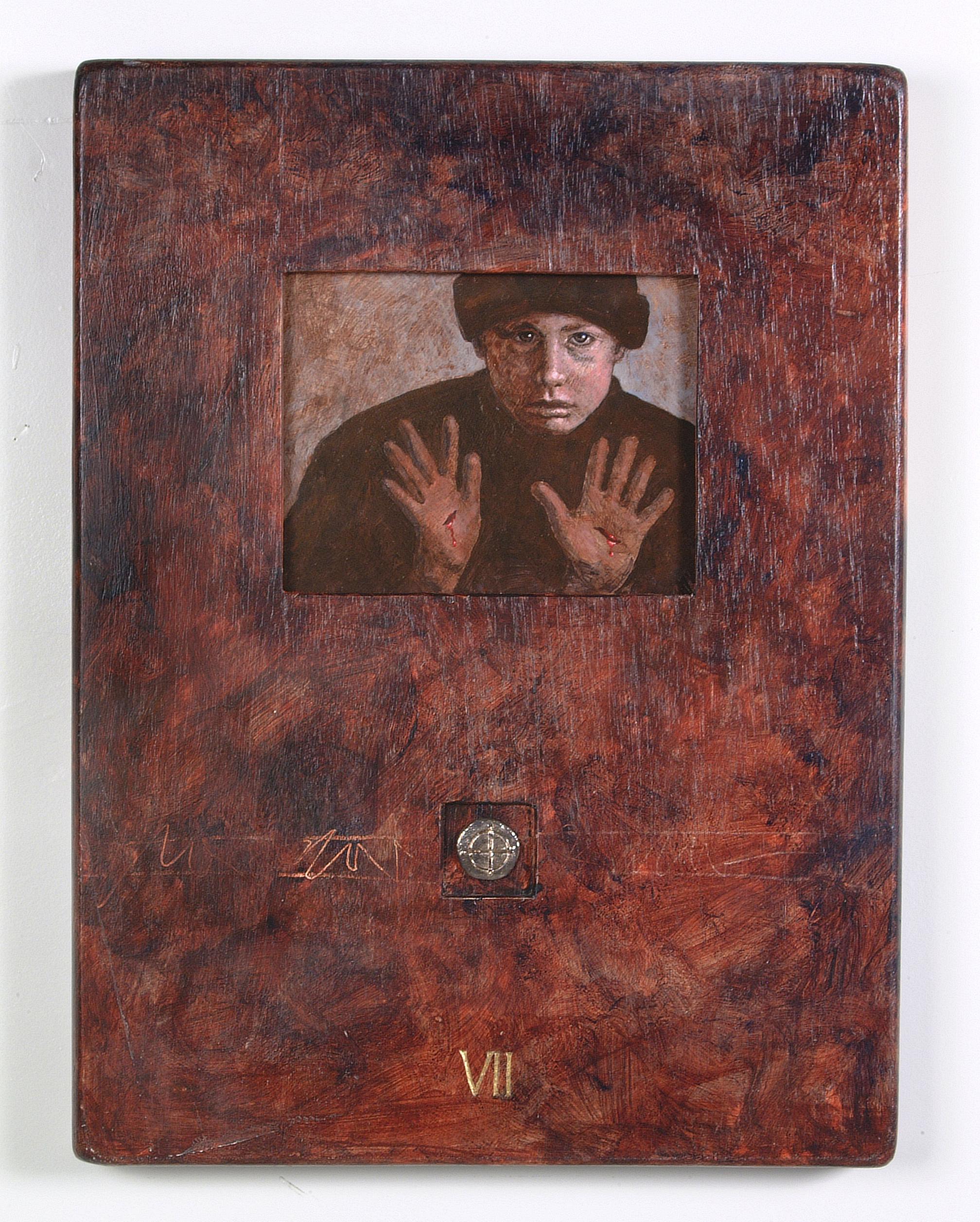 Station 7 of Billy Keen's "Resurrection Appearances" series depicts the wounded innocents in whom Christ is encountered. The display is at Coker United Methodist Church in San Antonio, Texas.
© BILLY KEEN

"I wanted to offer something during the Easter season that would keep people focused on the Resurrection," said the Rev. Kathy Barba Pierce, associate pastor for adult education and spiritual formation at Wesley Memorial United Methodist Church in High Point, N.C. She had been searching for something to offer after Easter Sunday that was different from a sit-down-and-study class, she explained. After reading Stations of the Resurrection by Raymond Chapman, she decided to bring something similar to Wesley. Pierce found pictures online — some of icons, others of artwork in different genres depicting Jesus' appearances.

At Wesley, 14 stations are set around the Gothic-style sanctuary, each with an illustration, Scripture reading and prayer. The church staged the "Stations of the Resurrection" for the first time in 2012. Offered twice as a guided meditation, it featured small groups lighting a Christ candle and carrying it to each of 14 stations, where they stopped for a time of response and silent meditation.

"One thing that worked well for me was not rushing it," Pierce said. "It was very much a contemplative reflection time — I allowed that silence and allowed things to soak in."

This year, the walk through the stations will be self-guided, starting and ending in the chancel area. Participants will receive a handout of Scripture and prayer to use as they move at their own pace.

Coker United Methodist Church in San Antonio will host a "Stations of the Resurrection" exhibit with original artwork by artist and member Billy L. Keen. The three-week exhibit — called "Resurrection Appearances" — opens on the second Sunday of Easter and depicts Christ as he might appear as an ordinary person today. The images include a Texas farmer, an African-American man, an Asian woman, a Native American, a youth, a young adult and others.

"They're meditative works, and portray the risen Christ as anybody we might encounter in today's culture," explained Linda Keen, wife of Billy, director of leadership development for the Southwest Texas Conference and president of the board of directors for the Christian Educators Fellowship of The United Methodist Church. "We're really working to be authentic in today's culture."

The Keens' participation in The Upper Room's two-year Academy for Spiritual Formation sparked the project. Billy painted the series, while Linda wrote a companion devotion guide.

While plenty of art through the ages illustrates the Crucifixion and pre-Cross events, Billy said, there's much less depicting post-Resurrection appearances. "As a Protestant, part of our deal is post-Resurrection, so I thought I would explore that," he said. He studied the New Testament for months to cross-reference Jesus' appearances in preparation for the contemporary paintings.

The 12 acrylic-on-wood paintings call viewers to search for Christ in people whom they encounter today. In one painting, a south Texas gardener has a T-shirt and sunglasses. In another, a young boy holds up his hands, wounded like Christ's, to show encountering the wounded innocent in modern times. "I can't have a 2,000-years-ago experience," Billy said. "My experience in encountering the Risen Christ is today ... We encounter Christ counter-culturally if we're open to it." 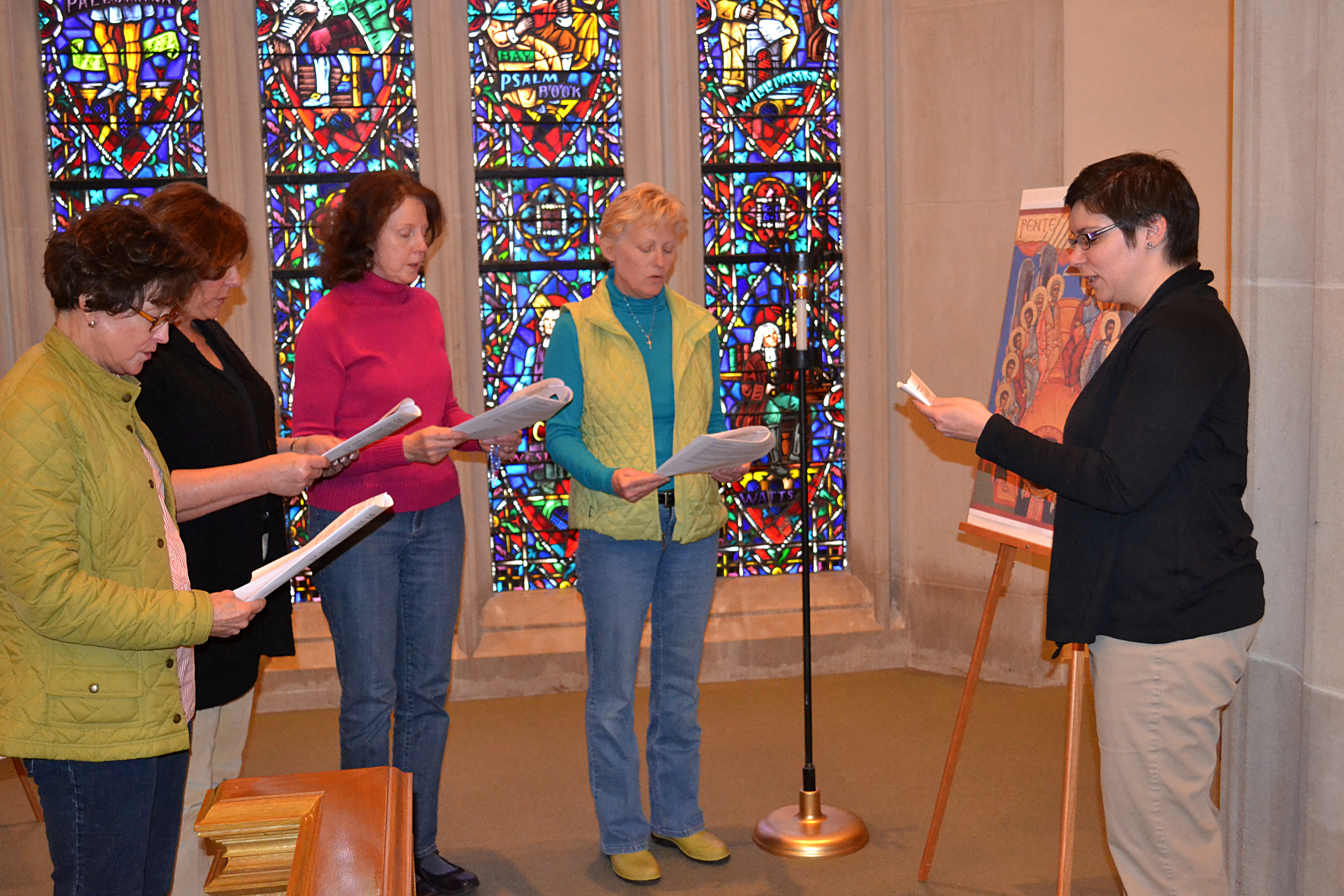 Matthew 25:40 guided Billy as he painted: "Truly I tell you, whatever you did for one of the least of these brothers and sisters of mine, you did for me."

The paintings — which were displayed at General Conference 2008 as well as at other conferences and churches — will hang on walls beside devotional words printed on large signs. These paintings have also been leaned on easels, hung on movable partitions in a meandering format and paired with a labyrinth.

Linda Keen said displaying the images will help further Coker's vision of "Love God, Serve Others and Change the World" by inspiring congregants to invite others to see the exhibit.

"In churches all across our connection, there are hundreds of persons working and serving to offer post-Resurrection services," she said. "It's an exciting and challenging time for those of us involved in faith formation ... it's more experiential, and we learn the best because we have been involved in it ourselves."

Putting the "Stations of the Resurrection" together gave Wesley's Pierce a neat opportunity as she lived "with the pictures and Scriptures and stories so closely." Those who visited the stations really found a time of reflection and remembering that the Resurrection is the joy and the core of who we are as Christians."

Carrie Madren is a freelance writer based in Great Falls, Va.

Here are a few ideas to keep the celebration going season-long.