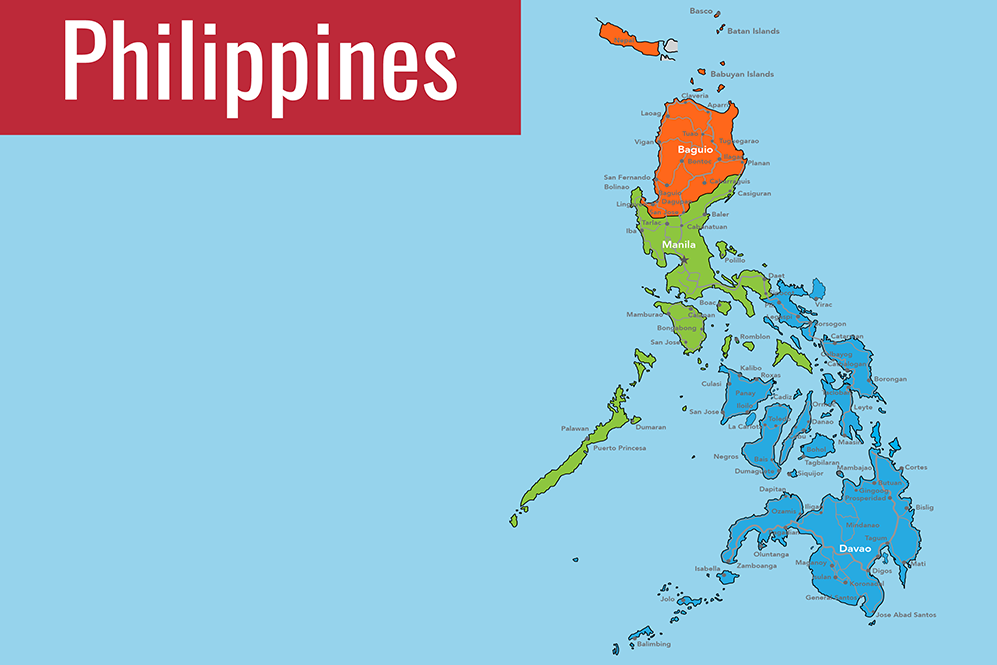 The Philippines is divided into three episcopal areas with 26 annual conference and one million members. There are over 7,700 islands with majority of mission ministries and local churches located in the provincial areas. Filipino culture is heavily influenced by the Roman Catholic Church which ninety percent of the population follow. Being island people, there is immense pride in the various local regions where one affiliates through language, food, and diverse culture.

The United States has had a dominant presence with economic and military support. However, that is changing with the major influence of Mainland Chinese investments. The five largest foreign investors in the Philippines are China, U.S., Japan, U.K., and Australia. The Philippine economy was growing 6% annually but has been on standstill due to the pandemic. The Philippines earns 10% of its hard currency from Overseas Foreign Workers (OFWs) remittances. Prior to the pandemic, 5,000 Filipinos would depart daily for work internationally, which made up for unavailable domestic jobs. This phenomenon, starting in the 1970s, has impacted the foundation of Filipino families in positive and detrimental ways.

Despite winning the lawsuit on various claims on the Spratly Islands located off the Western Philippine shores, China has actively built an airstrip, barracks and docked hundreds of vessels leaving fisherfolk with barely any produce catches and intensifying anxious international geopolitical relationships in the Asian region. The current Filipino administration seems to be catering to China, creating havoc in domestic Filipino politics. The Philippines is the largest daily user of texts in the world, and thus, media trolls control the airwaves with fake news. The Duterte administration has not stopped its rampage of killing drug dealers and users without legal recourse. The International Criminal Court in the Hague is collecting data to start an investigation on these killings later in 2021. During Duterte’s early years in office, the largest number of journalists in the world were murdered in the Philippines. The 2021 Nobel Peace Prize awarded to journalist Maria Ressa of Rappler.com denotes the harsh conditions experienced by investigative reporters in the Philippines.

Like the U.S., Philippine democracy has been teetering on the fringes of authoritarianism due to greed and power. Illegal mining of forests, lands, and oceans places the Philippines in precarious situations with regards to poverty and climatic problems. The United Methodist Church in the Philippines has been vocal on many of these injustices.

Filipino United Methodists have been focused on dealing with the devastations of the pandemic and the average of 20-26 typhoons that annually pass through the Philippines. Additionally, earthquakes and volcano eruptions are part of daily life within the Philippines, which is part of the active belt of the Pacific’s “Ring of Fire” that boasts the world’s highest concentration of volcanoes as well as 90% of the planet’s earthquakes. As of October 28, 2021, 2.775 million Filipinos have been infected by Covid-19. There are 49,857 are active cases; 2.683M have recovered; and there have been 42,577 deaths. Additionally, only 22.2% (or 24.3M) of Filipinos are fully vaccinated. The government hopes to fully inject 70 million persons (64% of the total population of 109.65M) by the end of 2021. In the meantime, the country remains on strict lockdown.

In 2008, The United Methodist Church in the Philippines experienced a split based on church autonomy and anti-UMC concerns. The departure of 130 churches and 2,000 members remains fresh with continued lawsuits regarding property. Thus, Filipinos have not necessarily divided over theology or human sexuality until the recent emergence of Methodist orthodoxy. Filipinos tend to lean traditional; however, there is a growing minority of progressives. The Philippines College of Bishops has issued several church unity statements to remain in The United Methodist Church.

Within a Philippine context, to broaden the spectrum of voices who are not usually at certain decision-making tables, these persons are intentionally invited to participate in these conversations: especially women, youth, young adults, children, indigenous groups, and those living in the provinces. The Philippines regional coordinating team is working with the College of Bishops and the Board of Women’s work to encourage conversations about identity, vision, and mission. Bishops will also begin these conversations with their cabinets who can assist in enabling these focus groups within their district and local churches.

The committee has been working to plan and coordinate conversations and information gathering in the Philippines.