Journey of a Bucket

The 2017 Atlantic Coast hurricane season, from June 1 to November 1, spawned 17 named storms that affected the United States and Caribbean island nations. The worst of these for the United States were: Hurricane Harvey, which made landfall in Texas on August 26 as a category 4 hurricane; Hurricane Irma, a category 5 storm that affected the Florida Keys, Puerto Rico, Barbuda, Saint Barthélemy, Saint Martin, Anguilla, Cuba, and the Virgin Islands early in September; and Hurricane Maria, a category 5 storm that wiped out much of Puerto Rico and Dominica, and also affected Lesser Antilles, the Dominican Republic, Haiti, and the Virgin Islands, September 18-20.

In August 2017, an emergency call went out from UMCOR Sager Brown to United Methodist conference Disaster Response Coordinators and to United Methodists through social media and the UMCOR website to assemble and ship cleaning kits so that UMCOR could meet the needs caused by an overactive and severe Atlantic hurricane season.

United Methodists across the country mobilized to collect materials and assemble the kits. In some conferences, bishops pushed out the appeal and challenged their membership to dig in and meet the need.

Bishop Ruben Saenz, Jr., of the Great Plains Episcopal Area, and Hollie Tapley, the Great Plain’s Disaster Response Coordinator, put together a video with a challenge. “Can we do 5000?” the bishop asked. “Of course, we can,” answered Tapley. Each of Great Plain’s 17 districts were challenged to complete 300 kits a piece—in two weeks! Publicity went out on the conference website, Facebook, twitter, and email.

Congregations arranged competitions with one another—big and small. In the tiny rural town of Wilsey, Kansas, population 100, Charlie and Elvie Aikens might see 17-20 people in the Sunday service at Wilsey UMC. As Charlie puts it: “On a good day, 24 show up at church. But we got the call, and in an area like this, neighbors take care of neighbors.” He said that for the income-level of the small town, the value of $65 a bucket seemed big, so they promised to do 15.


Flood buckets are assembled in the offices of United Methodist Publishing House. The buckets were sent to Texas following damage from Hurricane Harvey. PHOTO: MALCOM THOMPSON

Wilsey UMC folks brought what they could. “We set tables up in front of the sanctuary, and that way everyone at church got a hand in loading the buckets,” Charlie continued. “We did 15, and that was no big deal—so we did 15 more, and then a couple in town brought in a loaded bucket.” Charlie and Elvie delivered 31 buckets to the drop-off point in Lincoln, Nebraska. When they got there, they heard that a big semi-truck had to be loaded to go to Sager Brown the next day, so they returned to help and brought another member. “That was a mess of flood buckets,” noted Charlie. “We were wonderfully impressed to see our new bishop up in the truck helping to load the buckets.”

At a bigger church in Omaha, Nebraska, the congregation was also preparing to meet their challenge—100 buckets. Vikki O’Hara, Director of Caring Ministries at Faith Westwood UMC in Omaha, said she was hearing from many people in the congregation who wanted to do something in the wake of Hurricane Harvey, so they started pulling together cleaning kits even before they heard about the bishop’s challenge.

Students from Faith Westwood UMC IMPACT afterschool program for middle schoolers in Nebraska have just finished unloading 500 buckets and lids donated to the church. Behind them are just a small number of those buckets. PHOTO: VIKKI O’HARA

O’Hara encouraged her 900+-member congregation to bargain shop, buy in bulk, and ask businesses for donations to beat the $65 average price of a kit. At Lowes, where she worked part-time, she mentioned the challenge to her manager, who mentioned it to his manager, and before long, she had 50 donated buckets and lids. “Social media was huge,” said O’Hara. “We used it to thank people every time we got a donation—and that triggered more donations.”

Before long, through congregational connections, a donation of 500 buckets and lids came in—half of which they kept for their kits and half they dropped off at the conference office for other congregations to fill. The students in the IMPACT afterschool program at Faith Westwood helped to unload the buckets. A lot of buzz circled in the community—the Girl Scouts filled buckets, the local school collected supplies to fill buckets.

A free-will offering brought in $10,537 to buy supplies. They filled 259 buckets. They had so many they had to ask for help to transport them to the conference center. A pastor from another church brought a big truck by to take care of that need.

“We were overwhelmed. What we were hearing from our congregation was that they wanted to help. I think it means a lot for people to be part of something like this and to make a difference,” said Vikki O’Hara. “We sent 75 empty buckets to a church in Kansas, and that congregation did a whole community event around filling them.”

After a few weeks, Great Plains Conference collected 6,340 filled buckets to send out as cleaning kits to the UMCOR Depot. “It took 4 semi-trucks, packed top to bottom and to the door,” mused Hollie Tapley. “I believe in being the church and that’s what I teach to my disaster volunteers. We just reached out in a tangible way—telling people how they could help. It is the heart of the Great Plains people; they love to be the church.”

Thousands of buckets from across the country packed by thousands of United Methodists were arriving at the UMCOR Sager Brown Depot throughout the fall and into the winter months. Once the cleaning kits make it to the Depot in Baldwin, Louisiana, they’ve reached the half-way point in their journey.

Each of the kits coming in from congregations must be opened, unassembled, checked for consistency, and reassembled. Uniformity is essential to meet relief-kit standards and prevent problems from occurring on down the line.

Then came the volunteers.

They came from Nebraska, and Texas, and Arkansas, and Iowa, and Missouri, and Florida. More came from Tennessee, and Minnesota, and Virginia, and Illinois, and Oklahoma, and Georgia, and New York, and Indiana. In short—they came from everywhere. At the same time, the UMCOR Depot West in Salt Lake City was receiving and double-checking kits, as were eight conference-supported affiliate warehouses in Pennsylvania, Texas, Missouri, Alabama, Illinois, and North Carolina.

The Rev. Brittany Richardson Watson from the Arkansas Conference probably describes this experience the best: “I am spending the week at the UMCOR Sager Brown Depot in Louisiana and I can’t help but to reflect on just how powerful connection can be. In the wake of a dizzying few months of disaster and tragedy, I am working, worshipping, and eating alongside people from all over the country who have gathered together out of a shared call to help. We are organizing and sorting aide materials that have been collected and packed by countless hands in countless churches.”

Once the cleaning kits are doublechecked, reassembled, and packed up tight, they are stored at the UMCOR Depots and their affiliates until they are needed—and in 2017, many did not spend a lot of time in storage. Once a call for a large number of cleaning kits comes in, volunteers and staff pack the cleaning kits onto pallets, which are then wrapped in plastic to insure they stay together during shipping.

Before the busy hurricane season, there was a busy tornado season in the first half of the year. Thousands of cleaning kits were sent to United Methodist conferences in Alabama, Missouri, Arkansas, Georgia, and even a few hundred to Pennsylvania for distribution. After Hurricane Harvey, UMCOR Sager Brown delivered 11,000 cleaning kits to the Texas Annual Conference mission center for distribution in Houston and other areas. The Rio Texas Conference received another 1,400.

Following Irma, more than 5,000 cleaning kits were sent to the Florida Conference—they joined a truckload of buckets that were already in Florida and another truckload that came from Mississippi. The buckets then followed in the wake of Hurricane Maria to Puerto Rico. 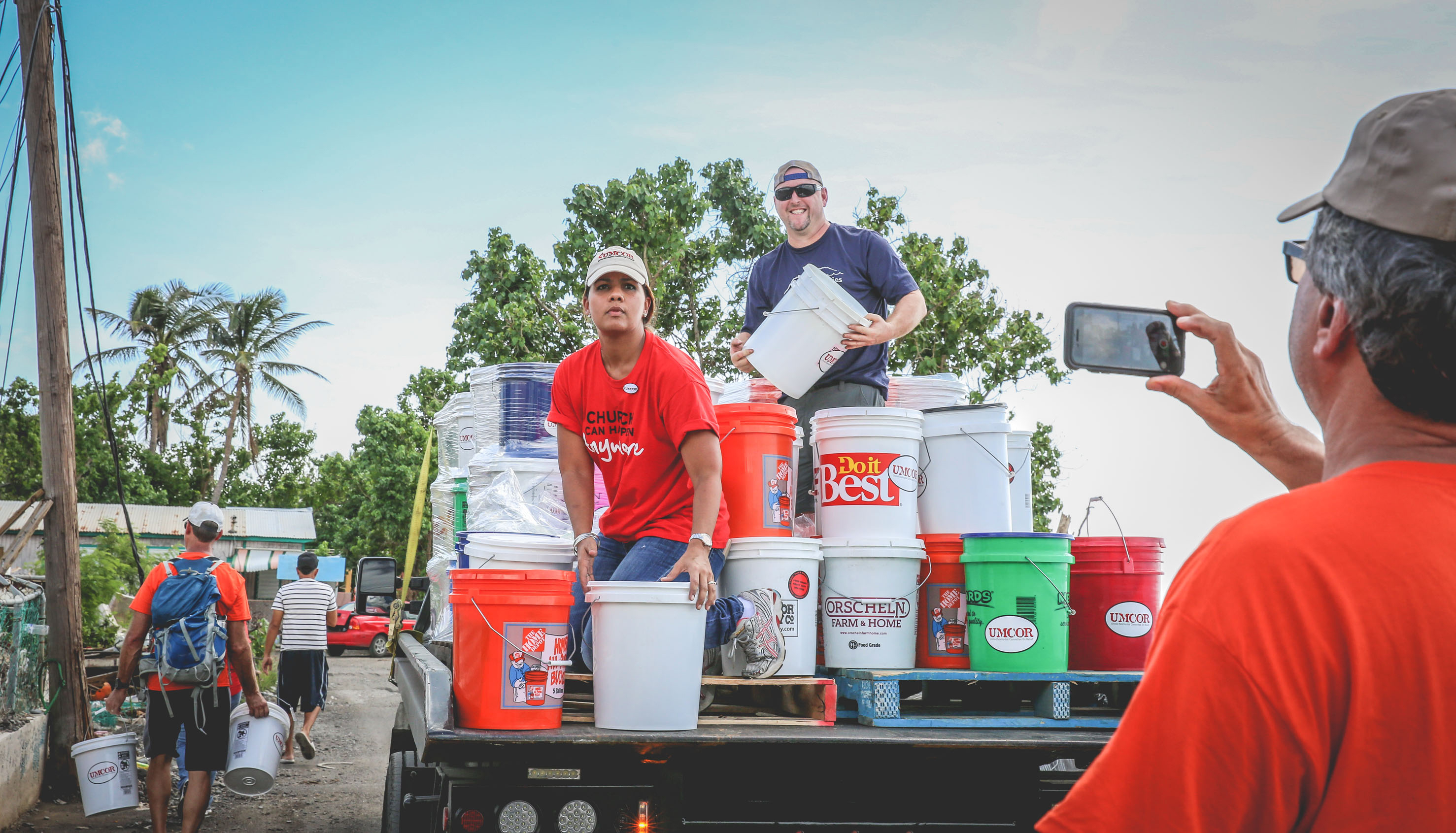 The Methodist Church of Puerto Rico received 6,712 cleaning kits, along with more than 32,000 hygiene kits (which used to be called “health kits”). Staff members from UMCOR and Global Ministries were in Puerto Rico with Bishop Hector F. Ortiz Vidal of Puerto Rico and UMCOR’s chair, Bishop Thomas Bickerton of New York, when some of the pallets arrived.

They were a welcome sight for storm-weary people. The Rev. German Acevedo-Delgado, a former staff and board member of Global Ministries from Puerto Rico, sent out a celebratory social media post in the first week of February 2018—his house finally had electricity restored after Hurricane Maria, after almost six months in the dark.

THE JOURNEY'S END IS ITS BEGINNING

In total, more than 31,000 cleaning kits were shipped out of the UMCOR distribution system in 2017. A year-end report showed that more than 250,000 hygiene kits and nearly 90,000 school kits were also distributed, as well as smaller quantities of sewing, layette, bedding, and birthing kits.

As each kit reaches its final destination—from the local distribution points to storm-affected people who come in to pick up needed supplies—it is opened up to begin the hard work of cleaning and recovery on the most basic level. Kits begin new lives—adopted by new families—bringing a little hope, a little love, and a lot of disinfectant to combat dirt and frustration.

A final word about kits from Rev. Richardson Watson: “It is easy to believe that the world is a bad place filled with terrible people. But the reality is that the world is what we make of it and when people live out of hope and love instead of fear and hatred, this world is a pretty magnificent place. God is working at Sager Brown, not just through the kits that are being packed, but through the much-needed hope that is being cultivated and shipped out right alongside the cleaning buckets.”

Kim Provost, Jr., staff of the UMCOR Sager Brown Depot in Louisiana, loads up a semi-truck with cleaning kits that will eventually end up in Puerto Rico. PHOTO: COURTESY UMCOR SAGER BROWN DEPOT