“I think women really are the foundation of many facets of society,” said Dr. Ashley Boggan Dreff, the newly elected General Secretary of Archives and History. Women today continue to play a vital role in society as they always have historically. Although Dreff recognizes that the foundational expectations of women are based on social constructions that sought to limit their influence, she praises women who challenged the basis for those expectations imposed on them and paved the way for others to reach their goals.

Methodist Women especially noticed these constructs and were able to advance themselves and others, even while living under them. “We see Methodist Women in particular reminding persons who historically have held positions of power and privilege to enact laws, develop institutions and live into theologies that really expand the Kingdom of God,” states Dreff.

In order to fully expand the Kingdom of God and paint a more complete picture, Dreff encourages people to be intentional when they pick up histories. Look for stories that center around women’s voices – women of all ethnic groups. We often take for granted the battles women went through to get very basic rights, such as the right to vote,  to be ordained, to make public speeches, to own a house and to own a credit card. These things took a lot of time, energy and thought. “Only through knowing the history can we ensure that not only are those rights maintained for those who have them, but they’re expanded for those who currently don’t enjoy those rights and privileges.”

Dreff highlights the basic misunderstanding around women’s rights, or feminism. She says, “Feminism is, in the words of bell hooks, the fight to end sexism and oppression.” She further explains that feminism is not and should not be seen as a male vs. female competition or a belief of being anti-men. Once society can move past those barriers of defense, then deeper conversations can happen and we can understand that society tends to favor men over women. “When you look at feminism as confronting oppression, and not anti-maleness, you end up with a much more useful definition,” she says. Where oppression fails, justice reigns and God is honored.

Telling Their Stories: The History of Women in the Local Church by GCAH 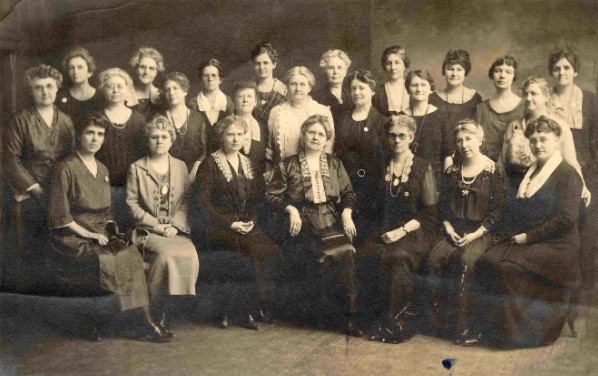 This resource packet provided by GCAH is designed to help you recover and celebrate the history of women in your church. The contents include suggestions for programs, special events, and research projects. View resource.

Women’s voices now and then

Dreff encourages women to play an active role in creating history, and not just documenting and remembering it. “I think women need to be a voice at the table where major conversations, particularly around separation, mergers or the varied forms of Methodism that will be coming out in the future.” Women’s perspectives should be intentionally expressed, listened to and heard. Dreff highlights the creation of the central jurisdiction of the Methodist Church in 1939, which was meant to separate and divide.

“Immediately leading up to that and right after, the women’s division was justifiably outraged at the creation of such a racist structure within our denomination and maybe if we would have listened to the voices of those women we would have ended up with something that was a bit more equitable for all,”  Dreff stated.

While women still struggle to  be included intentionally in critical conversations, in the past few decades digital communications have opened the door for new voices and experiences to be heard. “The digital world has drastically changed the feminist movement,” states Dreff. One of Dreff’s books Nevertheless: American Methodists and Women’s Rights follows women’s rights efforts and highlights the #MeToo movement. This hashtag went viral on social media in 2017 to bring awareness and advocate against sexual abuse and sexual harassment towards women.

The hashtag is one of social media’s greatest phenomena. A relatively easy tool to use, the hashtag allows information and content revolving around a topic to be aggregated in one space. “All of these different areas and [people] from different countries and in different languages,  find a way to share their story through this one hashtag #Nevertheless. You immediately gain access to the vast experience that women have around the world and within that varied experience you find that point of commonality that they all have,” says Dreff.

Hashtags such as #MeToo and #Nevertheless have changed the way women talk to each other and engage with the public. Dreff says, “Historically women have always found really creative ways to have their voices heard. I think the digital platform is the newest place for women’s voices.”

As the first woman to take on the office of General Secretary for the General Commission of Archives and History of The United Methodist Church, Dr. Ashley Boggan Dreff is finding her role in the history of the church. She encourages all by stating, “It’s our job today to not only lift up these women who got us to where we are, but ensure that their stories are told now and in the future and to pick up where they left off. We need to make sure we are truly focused on expanding the Kingdom of God.”

Aileen Jimenez is manager of Hispanic/Latino leader communicatons at UMCOM, Nashville, TN, U.S.A. You can reach her at [email protected].