Though negative influences in society can at times seem overwhelming, United Methodist clergy and lay leaders say they see people engaging in works of mercy every day, making their communities better and helping their neighbors thrive.

John Wesley preached works of mercy as one of the means of grace — ways in which people served and those serving experience the grace of God. Wesley believed in works of piety and works of mercy and taught that both are necessary in order for believers to be most fully formed into the image of Christ.

Just as Wesley's acts of piety – means of drawing closer to God – included individual actions and acts in community, so did the works of mercy.

Individual practices include doing good works, visiting the sick and those in prison, feeding the hungry and giving generously to the needs of others. Seeking justice is identified as a communal practice along with ending oppression and discrimination, and addressing the causes of the needs of the poor.

However, says the Rev. Steven Manskar, director of Wesleyan leadership at the General Board of Discipleship, "An important piece that is frequently missed when we discuss works of mercy today is that Wesley believed Christians must also care for the spiritual needs of people. ... For Wesley, evangelism, proclaiming the good news of Jesus Christ, his forgiveness of sin and love for all people — especially the poor, marginalized and oppressed — is as much a work of mercy as is feeding the hungry. "

Tracy Faulkner Carlson, director of connectional ministry at First United Methodist Church in Wenatchee, Wash., says she thinks people often do not realize that they are participating in works of mercy.

"I don't know if they understand that's what they're doing," she says about those who serve, "but I very much believe that it is an act of mercy. For me, mercy is compassion. In a sense, you absolutely feel what these people are going through. You want to help them not be in pain; you take some of that pain away from them."

Volunteers from Wenatchee prepare and serve meals three times each month at a local soup kitchen. Carlson thinks many people may not realize they're experiencing God's grace until they stop to reflect.

"In the middle of working in the soup kitchen, making sure the toast doesn't burn, cleaning the table, you don't really feel what you're doing until after you stand back," she says. "You go, 'Oh, that's what God feels like when you've been touched by grace.'"

"As Methodists, we are constantly seeking the means of grace so that we can grow in holiness," he says. "The Christian life is not just about attending church and enjoying worship, but it's (also) about being in the community so that they can experience God's grace in the works of mercy."

Burt says receiving works of mercy from others helps people to encounter God's love. "They know that God is real because of what they have experienced," he said.

The Rev. Tom Albin, dean of The Upper Room at the General Board of Discipleship, says Wesley considered the works of mercy "as the concrete expression of love with skin on it."

Wesley was known for visiting the sick and imprisoned, speaking out against slavery and giving of his finances to the poor.

For Wesley, those practices and others named in Matthew 25:31-46 "are required of all people who profess to be disciples of Jesus Christ," says Manskar. "They are practices through which Christians obey the command of Jesus Christ to 'love your neighbor as yourself.'"

In "Opening Ourselves to Grace," an Upper Room study on the means of grace, the writers include these traditional ways of participating in the works of mercy and add acts such as being a peacemaker, volunteering as a tutor and listening to those in need.

Ultimately, God's Spirit should guide Christians into which specific works of mercy are appropriate in their context, Albin says.

One way that United Methodists are providing works of mercy is through home repair with UM ARMY (United Methodist Action Reach-Out Mission by Youth).

Through service camps for high school students, UM ARMY mostly serves low-income, elderly or disabled individuals who would not be able to repair their homes without help.

"So many of them, because of their life situation, they have fallen through the cracks," says Brian Smith, the organization's national executive director. "They have such great needs. We come in and really fill those voids in their lives. They respond over and over and over that we were the grace they needed."

"There is no better way to experience grace than to give it, and at the same period of time, you begin to see how others have also served you," he says. 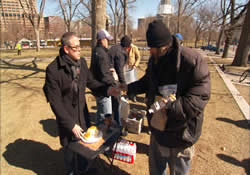 The Rev. Jerry Herships (left) serves Communion and shares sandwiches in ministry with the hungry and homeless as part of the outreach of AfterHours Denver, a young United Methodist congregation.
UMTV/CAREY MOOTS

This connectedness is one aspect of what makes Carlson want to serve.

"While I'm in the midst of serving, that is when I feel God working inside of me, working through me, guiding me," she says.

Burt says he encourages people to practice the works of mercy because it's a way to engage in the church's mission and to grow in faith.

"We want to help people realize that this is a life of discipleship," he says. "The best way to understand discipleship is to be a part of it, so we want to encourage people to engage in the works of mercy."