At the turn of the century, United Methodist Communications saw the need to break through the ever-expanding digital noise and reach out with a message of hope, faith, and love. It was time to advertise..

"Jesus used the language of the people: parables. Our tool and language of people today is television,” said the Rev. Steve Horswill-Johnston, who was director of Igniting Ministry at United Methodist Communications at the advent of the agency’s advertising era, and now serves as executive director of Communications and Brand Strategy at Discipleship Ministries. “The church asked, ‘How can we use that language in an honest, effective way, not to sell but to cast an image of who we are and what we offer?’”

The answer was a robust advertising effort on behalf of 36,000 United Methodist congregations across the United States. Horswill-Johnston continues, “There was a desire to engage the public and to be part of the public discourse, raising brand awareness as well as faith. Igniting Ministry was a way to do this in a large, coordinated way.”

Igniting Ministry was launched in 2001 with a $22 million budget and a memorable promise: “Our hearts, our minds, and our doors are always open. The people of The United Methodist Church.” Focused on 25- to 54-year-olds, the campaign was a new kind of multimedia evangelism, comprising television, print, digital, and outdoor advertising tools. Local churches were equipped with the tools, grants to help finance their placement, and a renewed emphasis to live out a welcoming environment in their congregations.

Jackie Vaughan, who served as agency's director of media, grants, and community events during this time, said, “No other denomination was doing this kind of advertising, and the key was bringing the churches along to welcome visitors across their threshold.”

Learning to reach out

Welcoming training began with “training the trainer” events, followed by 33 regional training sessions across the country. The hope was that all congregations would be prepared for the first-time visitor influx, people who had seen the advertising and were seeking to learn more about The United Methodist Church.

“There was a hunger for this kind of teaching and training. Churches wanted to reach people, they just didn’t know how,” said Emily Reece, director of program and training during the Igniting Ministry campaign. 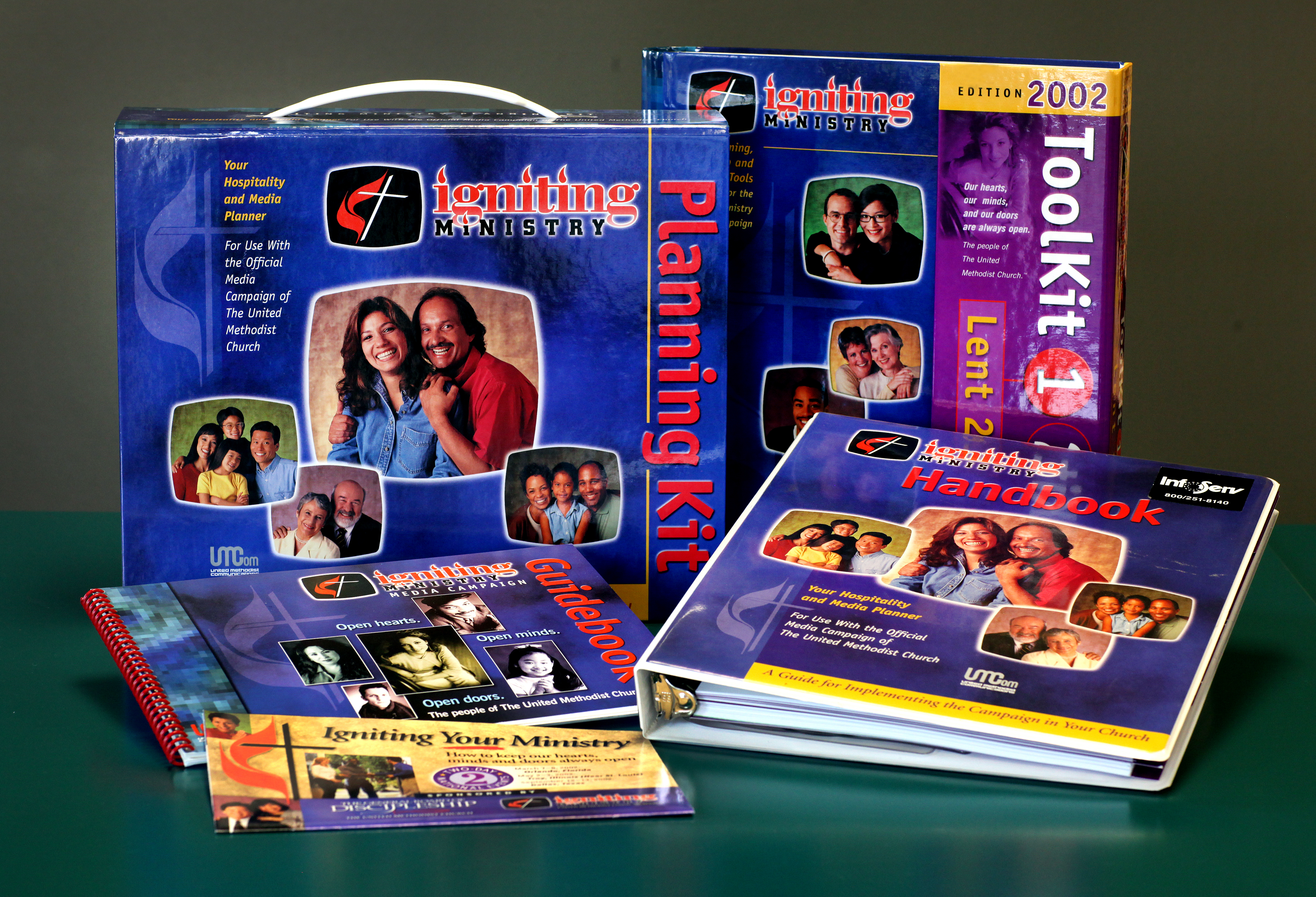 Comprehensive Igniting Ministry tools were available for congregations as part of the campaign. Photo by Kathleen Barry, United Methodist Communications.

Comprehensive training kits were available so that local churches could bring their congregations on-board with the national efforts. “Churches had a desire to live up to the campaign’s message, and we helped them create a welcoming environment – not just with the building but also with people who are welcoming, inviting and discipling,” said Reece.

More than 33,000 church leaders participated in welcoming training during the first four years of the campaign.

Hope in times of trouble

With the groundwork and local efforts in place, the national Igniting Ministry television campaign began on September 5, 2001. Just six days later, the country was reeling from the now-infamous terrorist attacks on America. The advertising focus shifted to help people deal with their pain and confusion.

Horswill-Johnston said, “Everything was dark for a period, with wall-to-wall news, but The United Methodist Church was one of the first advertisers back on television after the attacks.”

The Rev. Larry Hollon, top staff executive of United Methodist Communications from June 2000 to April 2015, called a staff meeting on the day of the attacks to decide what to do. After an emotional discussion, the agency decided to pull its original ads and produce a new message calling the world to prayer, he said.

"It was produced overnight and sent to cable and broadcast operators," Hollon said. "We called the world to come together to pray no matter their faith, and we asked local United Methodist churches to open their doors to their communities for prayer."

The advertising communicated a message of hope and support: “The people of The United Methodist Church are praying with you.”

A 45-foot billboard was commissioned two blocks from ground zero in Manhattan, featuring praying hands and the message, “Fear is not the only force at work in the world today.” In its three-month presence, an estimated 600,000 passersby saw the billboard every day.

In a letter published in the New York Times, a woman said she was moved to tears by the banner -- and also reassured. "The banner," Hollon said, "was an important theological witness to peace and reassurance in a world of uncertainty and violence."

“With September 11th, we learned a lot about being current with advertising. We began looking at what was happening and how we could be a sensitive voice in times of pain,” Vaughan reminisced.

The agency responded to other crises as well, including the Gulf Coast hurricanes, the South Asian tsunami, a bridge collapse and wildfires. "We provided a counterpoint to those who said these events were the reprimands of an angry God," Hollon said. The United Methodist ads provided positive, theologically sound messages of hope, he said.

The church’s advertising continues to be a key ministry tool in times of struggle, serving as a beacon of hope to hurting people whether they are victims of natural disasters or terrorist acts. “We reserved funds for contingencies and created materials with messages of hope for situations that were breaking news,” said Reece. 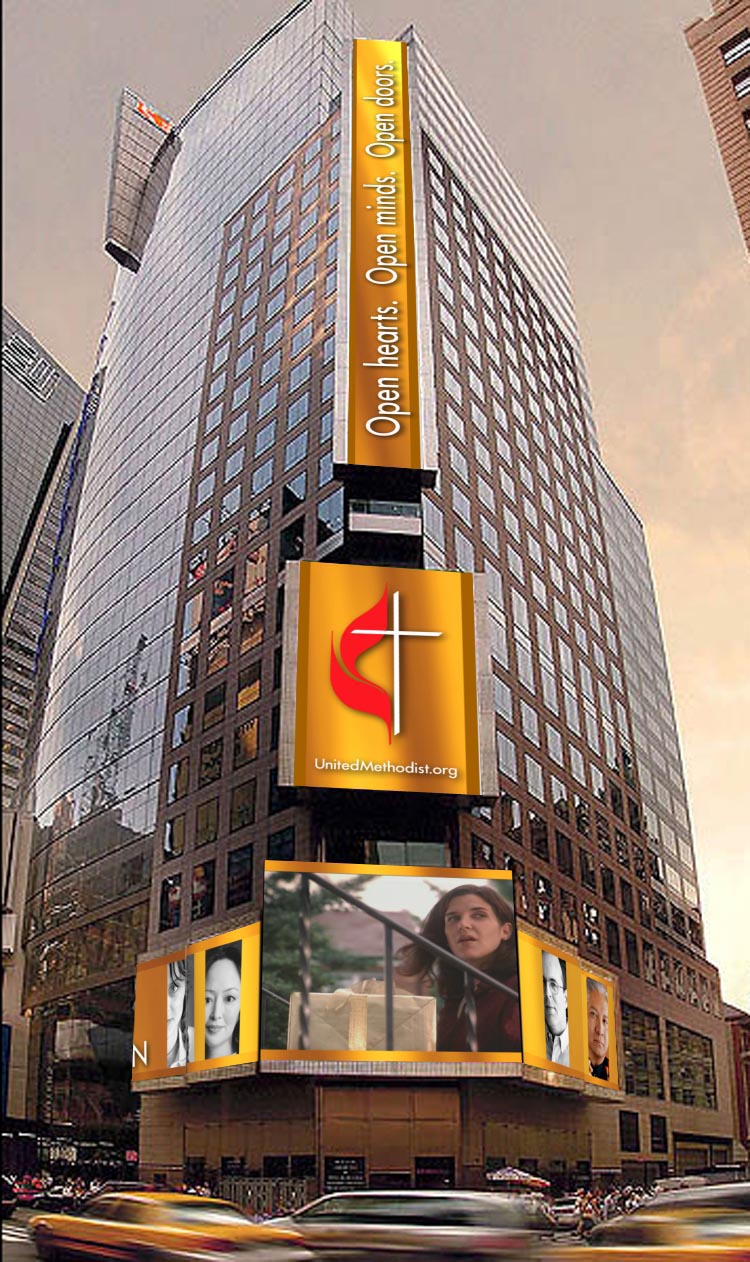 In 2003, United Methodist Communications sought to reach 1.3 million people a day with an Igniting Ministry advertisement on a billboard known as the “centerpiece for Times Square.” The billboard’s owner, Reuters, rejected the request, citing a long-held policy banning such ads.

What followed was a highly publicized debate over the presence of religious advertising in mainstream media. The two-month discussion ended with a letter of apology from Reuters and an Igniting Ministry commercial on the billboard, the first faith-based advertisement ever allowed. Thomas H. Glocer, chief executive of Reuters, wrote in a letter, “You have given us cause to review our thinking, and for that I am grateful.”

Hollon recalled that United Methodist Communications' lawyers and advertising partners "told me we couldn't win this debate." But, he said, the agency had to make a stand. "We argued that Reuters was wrong to categorize religious expression in the same way it categorized political and pornographic speech. We argued that religious expression should be considered on its own merit, and we won."

After the first four years of the Igniting Ministry campaign, first-time attendance at 160 test churches had grown by 19%, and overall attendance in those congregations had increased by 9%. This success allowed the campaign to be renewed for another four years.

New tools, ranging from web-based training to paper door hangers, complemented the existing advertising and better equipped local churches in their evangelism efforts during the next phase of the campaign. Reece said, “The campaign continued to evolve as we became better at targeting our audience and understanding the needs of the local church. We added new tools that were easily implemented at the local level: an online forum for sharing best practices, youth and small group resources, and detailed extensions to the original training kit that could be used during worship.”

Again, there was success. In a 2008 survey, 54% of participants expressed a willingness to visit a local United Methodist church. 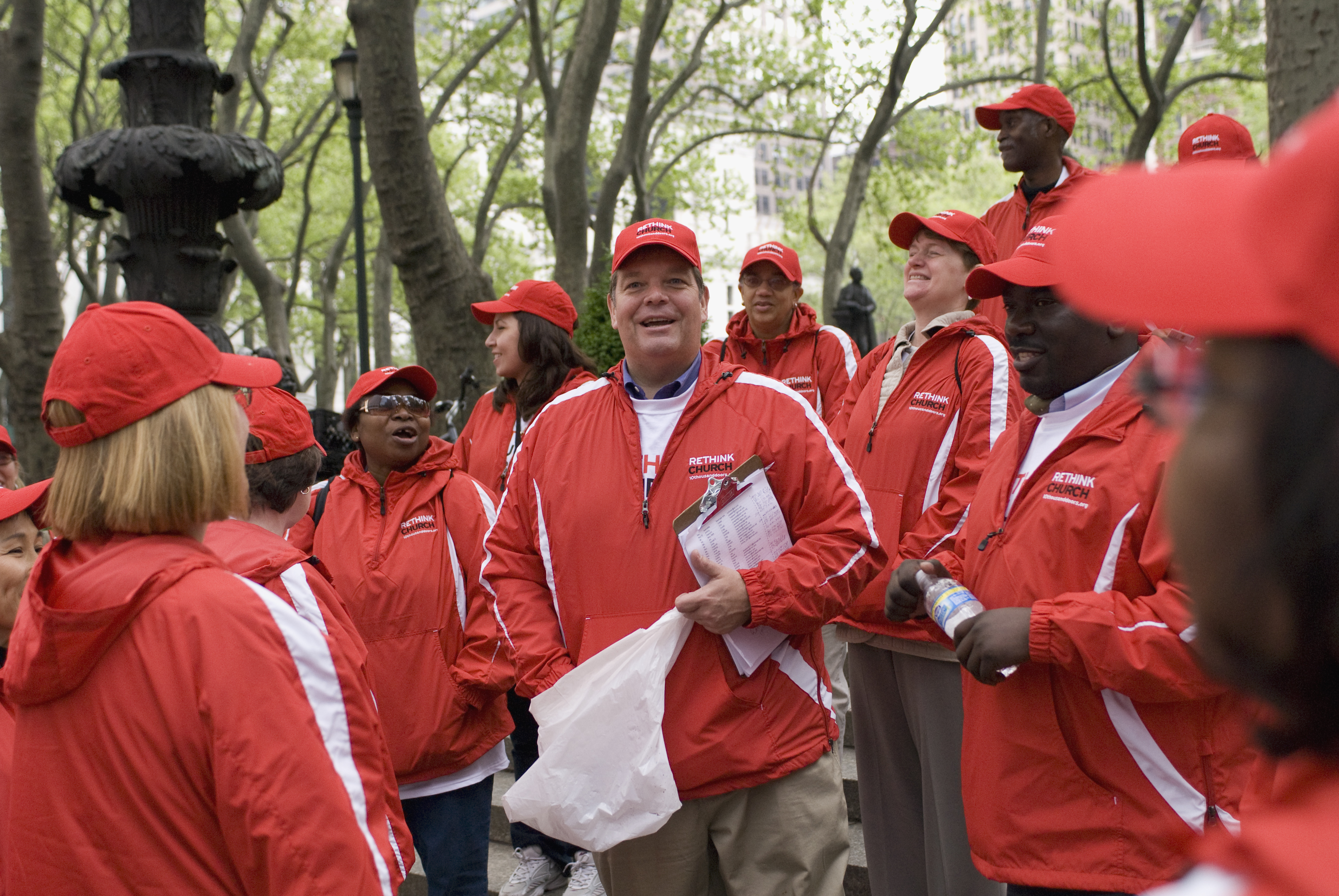 After eight years of Igniting Ministry, United Methodist Communications saw a need to refresh the campaign. Rethink Church focused on a younger demographic, 18-34-year-olds, tech-savvy seekers who wished to make a difference in the world but who might not be attending a church.

The well-recognized tagline, “Open minds. Open hearts. Open doors.” was examined and it remained, but the word “open” became a verb, not an adjective. Reaching an audience whose attention was increasingly shifting from offline to online also meant adding mobile, social and digital channels.

Church too became a verb. Churches were asked to think about how ministry could happen outside of their buildings – changing the perception that church was only a Sunday morning presence. The agency saw an opportunity to help churches jumpstart outreach through event grants, helping to open doors in creative ways such as 5K runs, food packing events, building projects, and health clinics.

Since 2009, over 13,000 churches have made use of the resources, mobilizing more than 600,000 volunteers to impact millions of lives through Rethink Church events, made possible by grants that provide event websites to recruit and organize volunteers, advertising placements and public relations support.

Another significant component of the current campaign is its wide digital footprint that receives more than eight million social media engagements annually. "We know that we are called to be in the world, not of it, and our active voice and following in social media helps us reach people at the edge of where the church and culture meet," said Jennifer Rodia, senior director of Brand Strategy at United Methodist Communications.

The church’s advertising has encouraged faith with creativity, adaptability, and a willingness to rise to new opportunities presented by technology and culture. "You are doing something right," said one mom. "My 16-year old excitedly reported seeing one of your ads on YouTube. You are getting through."

*Laura Buchanan is a PR Specialist for United Methodist Communications