'Teach Us to Pray' webinars

Free "Teach Us to Pray" webinars sponsored by The Upper Room and Interpreter magazine will resume on Thursday, Sept. 26. Listen to past programs at umc.org/pray-webinars.

'Teach Us to Pray' Series 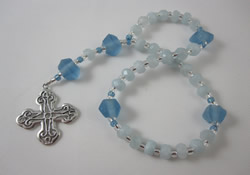 A resurgence of ancient prayer practices has United Methodists and others across the United States experiencing traditional spiritual exercises in new ways.

These practices include acts such as contemplative prayer through silence, creativity or nature and use of spiritual tools like prayer beads and icons.

The Rev. Daniel Wolpert, pastor at First Presbyterian Church in Crookston, Minn., is the author of Creating a Life with God and Leading a Life with God, two books published by The Upper Room that discuss forms of contemplative prayer and how they can change individuals and churches.

Contemplative practices allow people to hear God, he said, by minimizing the noise and busyness often present in American culture.

"They give us an opportunity to experience this Being that is very close to us, but that is, at the same time, separate from the individual workings of our mind," Wolpert says.

According to Wolpert, executive director and co-founder of the Minnesota Institute of Contemplation and Healing, the contemplative tradition in Christianity began in the third or fourth century but faded away when leaders began to emphasize reading and preaching from Scripture. Because of that shift, people in America often assume that contemplative practices, like silent prayer or meditation, originated in Eastern religions. But Wolpert said this isn't true.

"Christianity has a very rich contemplative tradition," he says. "What certainly has happened in the West and American Christianity is this whole rich history in the spiritual life became lost. People just didn't know about it."

Kristen Vincent, an author, artist and speaker, creates Protestant prayer beads to use as a spiritual tool that can help with focus during prayer. Using prayer beads can help people concentrate if they find their minds wandering when they pray, she says.

"I think they really make prayer easy for people and accessible," she continues. "People really struggle with prayer, and they don't know how to approach God or what to say. Using the beads to structure your prayer can be enormously helpful for people."

Outside of times in prayer, Vincent says the beads serve as a visual cue during daily activities. "You can see them sitting on your desk, and that reminds you to pray. They can remind you that God is here for us and ready to hear what you say."

Vincent began designing prayer beads and created Prayer Works Studio in 2009. She says sometimes people who grow up in Protestant church culture are hesitant about using prayer beads. But she says the beads are simply a tool to facilitate connection with God.

"We are all called to connect in various ways with God. Some are called through Scripture, some through a hymn, some through taking a walk in the woods," she says. Using "prayer beads is just one of those ways."

In her personal prayer life, Vincent found that she experienced God better when using prayer beads. "Using the beads helped me find my way of connecting with God that felt comfortable."

Vincent says she still uses the beads sometimes but no longer needs them to focus.

Using prayer beads or other tools to enhance contemplative prayer can be beneficial for individuals, but Wolpert says they are best experienced in community.

"I think the group thing really can't be overestimated," he says. "I would really encourage people, if they're interested in this, to find groups that are already going or talk to people at their church and say they want to get something going. Ideally, this is really what the church should be doing."

As people begin to try contemplative practice, Wolpert says they will likely have trouble quieting their minds. "At first, you experience the chaos of your own mind."

People tend to be too busy and overly stressed, Wolpert says, and this makes it difficult to see the world with appropriate perspective.

"We can't see God; we can't see other people; we can't even see ourselves very clearly," he says. "As the fog begins to lift, we can listen more clearly."

"What we're doing most of the time is we're taking all of the sensory input that comes from the world, and we're creating what we interpret as reality," he says. "That's why we all see the world in very distorted ways, and so we have a hard time seeing where God is in all of that.

"These practices create a space in which we can listen, so that sorting process begins to open up and slow down," he says. "We begin to see things how they are, which means we begin to see God in the midst of everything."

That ability to see God at work, Wolpert continues, leads to transformative action.

"Contemplation leads to gracious action and really begins to transform the world," he adds. "It opens us up to this very different space, and we begin to hear the living word in our midst. ... We become more compassionate. We become more open and loving to ourselves and others. We become more grateful and generous."

A Bead and A Prayer (includes a four-part Bible study), Kristen Vincent (The Upper Room)