Each year, as college students were beginning their migrations to campuses, Robby Balbaugh, youth minister at First United Methodist Church in Weatherford, Texas, would make plans similar to those of thousands of youth workers and pastors: visit the students, send care packages, stay connected.

He would think of visiting the students on campus, taking them out to dinner, getting to know their friends and helping to connect them with a local Wesley Foundation or United Methodist church, but it never happened quite like that. "Sometimes my intentions to do big things keep me from doing anything," Balbaugh realized.

His main hope for the students was for them to become involved in a faith community like a Wesley Foundation or other campus ministry so that their souls would be nourished along with their intellect. He firmly believes, "College is a fantastic time to grow your faith and not put it on hold." 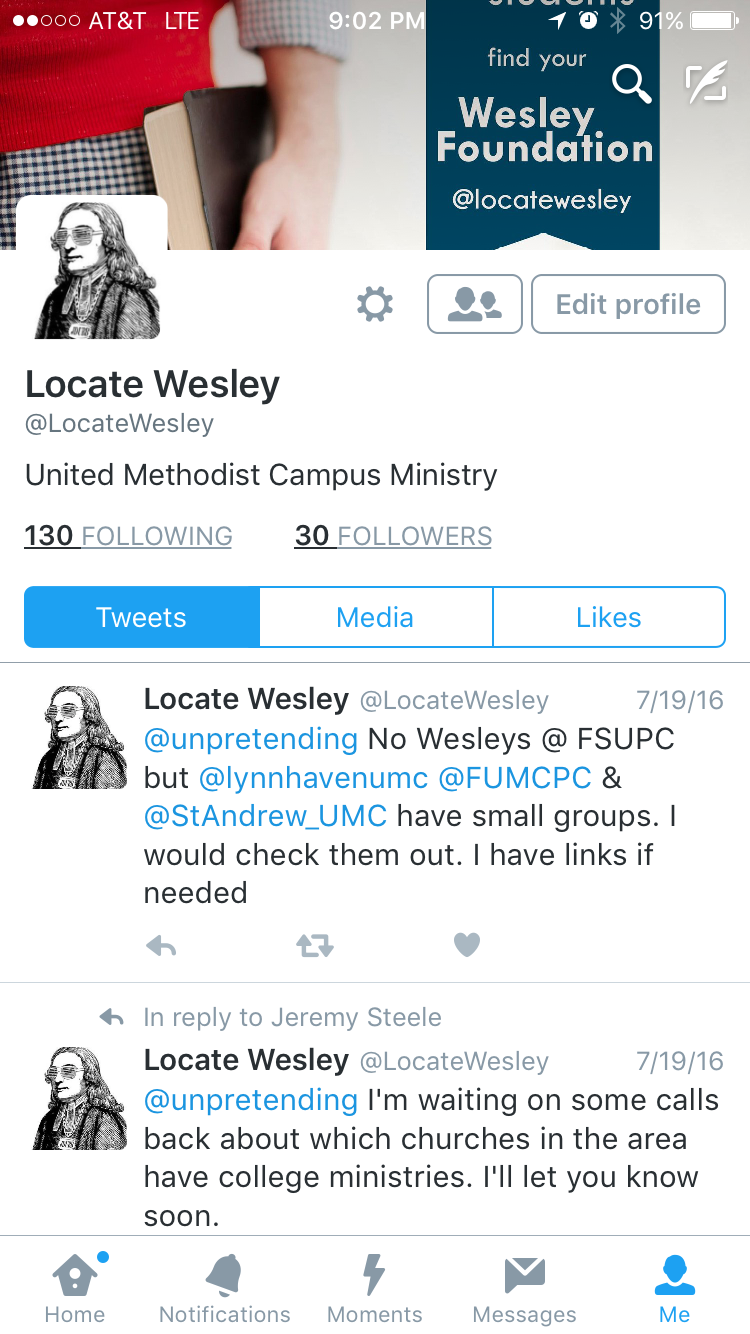 Time after time, though, when his students came home for breaks and they would share coffee, Balbaugh discovered that young people who were deeply involved in youth ministry while in high school had never realized there was a Wesley Foundation a couple blocks away from where they were spending hours every day in class. He knew there had to be a solution to help students make those connections – one that used the dialect of the millennials' native technological language.

While reading about twitter bots (automated Twitter accounts to help you do everything from find the weather forecast to tell you a joke), Balbaugh had an idea. What if there were social media accounts that could do the hard work of finding a Wesley Foundation or other United Methodist college ministry for anyone seeking one.

Balbaugh went straight to the internet and registered @LocateWesley on Twitter and Instagram and set up a Facebook page. He sent out information to his contacts letting them know that any student, parent or pastor looking for a Wesley Foundation could tweet or tag or post to these accounts the name of the university or the city. A reply would tell the location of the closest Wesley Foundation – and a virtual introduction if that ministry had an account on social media.

It wasn't long before the first tweet came in: Angelo State University. While a quick search showed no Wesley Foundation, that was not going to stop @LocateWesley from connecting the student to a faith community. Searching the conference website, it found a United Methodist congregation with a vibrant college ministry and made the connection. It also told the searcher that the United Methodist church participates in a local interdenominational college ministry.

Balbaugh said, "The reality is that a simple Google search would not have turned up anything in this case and most people would probably give up." You needed insider knowledge to look for the conference site and do the kind of digging that @LocateWesley did.

@LocateWesley also lets users leverage other services like the Find Your Place tool provided by the Collegiate Ministries office of the General Board of Higher Education and Ministry in a conversational way on social media.

That is the hope of @LocateWesley. Balbaugh said, "We hope that we can bridge the gap between high school and college ministry and no longer accept that college is a time for students to wander away from the church and no longer allow hard-to-find information to make that wandering an easy choice."

This digital expression of the connection is another way that technological innovators in The United Methodist Church are translating information and resources into the language of social media.

The Rev. Jeremy Steele is Next Generation minister at Christ United Methodist Church, Mobile, Alabama. He is also an author, blogger at jeremywords.com and a frequent contributor to MyCom, an e-newsletter published by United Methodist Communications.