The Pastor as Chief Storyteller

This past summer I retired after serving as senior pastor at West End United Methodist Church in Nashville, Tennessee, and after 43 years of membership in the Tennessee Annual Conference. In the fall, I began work with Martin Methodist College in Pulaski, Tennessee, as writer- and storyteller-in-residence.

In this new role, I began to explore the stories of the school and the surrounding community. A few weeks after I began my work there, I stopped in the branch of my bank near the campus. As in many small towns, it doesn’t take long for those at the grocery store or coffee shop or bank to treat you as if they have known you for years. As I was explaining to the teller my somewhat unusual position at the college, she spoke up and asked if I knew that their bank recently named a chief storyteller. I had no idea what she was talking about. She told me that a young man from Atlanta was the chief storyteller for the entire banking system, and she would see if she could find out his name so I could be in touch.

When I returned to campus, I began to search online for persons in the role of chief storyteller. I discovered that Nike has one. Microsoft has one. The city of Detroit had recently appointed a chief storyteller. From what I could discern reading about their responsibilities, the chief storyteller’s primary role is to keep the story of the organization alive and in front of other employees or citizens to ensure that its founding stories — which reveal why the group exists in the first place and what its core values are — would not be lost as leaders and employees come and go. These descriptions also reminded me of the role of the “griots,” or West African storytellers Alex Haley interviewed as he was researching his book “Roots.” The griots handed down tribal history from generation to generation in the same way a chief storyteller reminds a group of people where they come from, what they value, and essentially why they do what they do.

I realized this was exactly what I had been doing at each of the churches I had served. My primary role was not as an administrator, although there was always plenty to administer. My main role was not to serve as a counselor, although there were those who came for counsel. My most important role was as their griot or chief storyteller — teaching some, and reminding others, of our long tradition so we remembered who we were and why we were doing what we were doing. 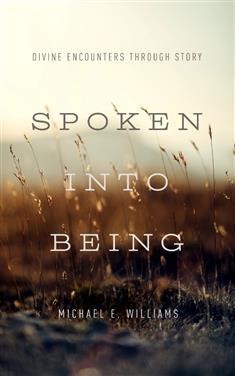 Michael was the author of numerous articles, stories, poems and books. His latest book on storytelling, "Spoken Into Being," was pubished in 2017.

Two volumes of his poetry were also recently published: "Take Nothing for Your Journey" and "Kristos Cantos."

I think serving as a chief storyteller may be the primary role of all pastors.

Sources of our stories

The stories we tell as pastors come from many sources. We begin with stories from the scriptures to introduce our congregations to our common ancestors. The stories shape who we are as a community based on the experiences of God that have formed communities of faith across the ages. Told again and again, these stories create in our imaginations the shared images that shape us as a community, although we most certainly will differ on how we interpret those images. Stories from the Bible allow us to have a relationship to those who have gone before us and to learn from experiences that happened long before we were born. Jesus, of course, is the primary example of a chief storyteller.

We also tell the stories from the history and traditions of the church, of the early followers of Jesus, the desert mothers and fathers, the men and women of faith across the ages who attempted to live out their commitment to following Jesus in whatever age or society they were born into. These stories of wise, faithful and courageous individuals and communities help give us courage to live our faith, even when doing so goes against the surrounding culture.

We tell the stories of the particular congregation to which we have been appointed. We hear those stories from congregation members and attempt to place them within the light of the gospel, allowing the good news of God’s love for all people to be proclaimed by the very particular story of that community of faith. Telling a congregation its own stories can reframe and remap past experience so that it becomes new as never before. We answer the question, “Why is this place considered a sacred space for so many?”

Finally, we tell our own story of faith. As we reveal those whose lives have touched our life, whose stories have shaped our story, we help people in the congregation identify those who have been windows into God and examples of faithful living for them. By telling the stories of those who have influenced us, we encourage each other in living out our faith.

Sadly, the Rev. Michael Williams passed away unexpectedly on March 19, 2018 before this article could be published.

Michael loved hearing, telling and writing stories. He knew from an early age that he was called to tell stories and to help others tell theirs. He believed deeply in the power of stories and storytelling to foster deep listening and empathy, to bridge divides and to heal.

Over several long lunches, he enthusiastically and joyfully described the work he was doing in his “retirement” at Martin Methodist College. In addition to teaching, he was working with the administration and faculty to incorporate storytelling into the institutional and instructional life of the school. At freshman orientation, he had the students tell one another their stories as a way to learn about those who are different. He was teaching nursing students to listen more deeply to the stories their patients tell them.

Michael believed that all the stories we tell originate in and flow from God’s act of speaking the world into being and calling it good. He loved the stories of the Bible and spent his life retelling them to proclaim God’s redemptive relationship with us and recount our encounters with this loving God.

As many who knew Michael have noted, every one of his sermons communicated the same message: we are all created in the image of God and loved unconditionally.

May we all continue to faithfully tell — and live out — this story of Love.