Twenty-three United Methodist communicators from the Democratic Republic of Congo have learned to tell the story of the church using modern methods and equipment.

He called on participants to help the church connect globally through communication. “Effective communication is the building block of any successful organization,” he said. 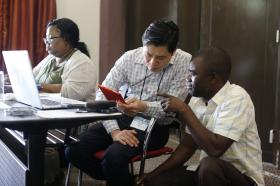 Danny Mai (center) helps Isaac Kunda Muke with a question during the training for Congolese church communicators. Mai and Shelia Mayfield (far left) were part of the team from United Methodist Communications, which held the training. Photo by Kathleen Barry, UMNS

Danny Mai, chief technology officer at United Methodist Communications, shared the mission of the denomination Communications agency, which is to communicate, “All the good we can, in all the ways we can, to all the people we can and in all the places we can.”

He encouraged them to be truth seekers and storytellers who lead the global church to use the power of communications to advance ministry and reflect the church in the world.

In 2016, UMCom introduced UMConnect, a bulk SMS application, and church mapping in the Congo Central Conference – the region of the church that covers the Democratic Republic of Congo. Communicators were trained on the use of both systems. Today, many members regularly receive text messages on the activities of the United Methodist Church. Philippe Lolonga, Kivu Conference, said church mapping is a new experience in the Congo Central Conference. “The communicators’ work will allow anyone to locate local churches easily.”

The Congo Central Conference communication challenges include low Internet connectivity issues especially for those in remote towns up to lack of communication equipment. However, communicators are making an effort to convey the information to the large audience in the church and outside in all ways they can. 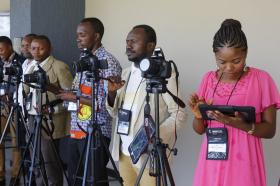 Congolese communicators learn to shoot with their DSLR cameras and to send the images via wi-fi to their iPads.  Checking her iPad is Irene Kashala Tsheleka.  Photo by Kathleen Barry, UMNS.

Each participant received a camera kit and an iPad. “I had challenges as a communicator especially in the area of taking and editing photos. Sometimes I had to use my phone, which has a low-quality resolution on pictures. However, with the provision of this modern equipment, communication in my annual conference will improve,” said Chadrack Londe of the East Congo Conference.

The Rev. Joseph Kitenge, Tanganyika Conference communicator since 1991, said the equipment he received will allow him to experiment with a new way of communicating. “We used to communicate orally, then in writing. Now, through videos and internet, I will be able to communicate and evangelize effectively,” he said.

According to the Rev. Betty Musau, a communicator in the North Katanga Conference, communication should be the transformative channel to reach out to communities affected by natural and human-caused issues. “If all of us communicate with the intent to make disciples of Jesus Christ, then we will contribute to the total transformation of the world,” she said. She considers communications as the church’s “fifth Area of Focus.”

Since working as a church communicator is a challenge in Africa, John Chituka of the Zambia Conference called his fellow communicators to view their role as a vocation. “Many communicators work without pay. If it were not a calling, we would have run for other jobs,” he said. “God needs us in this ministry; we must not disappoint him.”