How to reach Generation X

RELEVANT CONNECTION WITH THE CHURCH: A GENERATIONAL SERIES (PART 2)

Growing up, this generation lived through a backdrop of revolutions: the fall of the Berlin Wall, the advent of video games and the rise of personal computing. Even as they enter middle-age and peak marketability, Gen Xers are often overlooked in favor of the generations before and after them.

This is part two of a four-part series looking at four generations — baby boomers, Gen X, millennials and Gen Z. We’ll consider: who they are, what they believe, their needs and how we can reach them. As a refresher, here’s an outline of the current six generations:

A baby boom in the U.S. began at the end of World War II but slowed during the unsettled years of the early sixties. After the more easily classified baby boomers, those born between 1965(ish) - 1979 defied easy categorization. So they were dubbed Generation X. 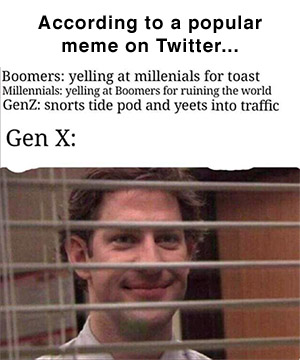 Sandwiched between larger and more hyped generations, Gen X bemusedly takes pride in being known as slackers and ignored by the media and marketers. When CBS forgot to include them in a news story, Gen Xers poked fun at other generations and bragged about being skipped because they're busy getting things done.

This attitude is consistent with their memories of childhood as Xers felt abandoned by both parents and society.

Growing up they were “latchkey kids,” left to care for themselves after school because of working parents. That created a strong streak of independence. Since they grew up with the televised scandals of Watergate, Wall Street and televangelists, cynicism bleeds into their (mis)trust of institutions, corporations and government.

Defining the undefined of X

Generation Xers are known as the most hardworking and pragmatic generation. They look for common sense solutions that work rather than idealized options. Gen X adopted and embraced technology as it emerged. The founders of the most successful companies today (Google and Amazon) are Gen Xers.

A call to action for the church

Even though they mistrust religious institutions, Gen X is half as likely as boomers to ‘lose their religion.’ According to Pew Research, 70% of them identify as Christian. Only 7% are atheists/agnostics, but 23% identify as nones. This generation’s attitude toward religion, service attendance and prayer show a commitment to seeking purpose and meaning in life.

This is a call to action for the church to reach out to this sometimes forgotten generation. Like boomers, Xers are often overwhelmed as they balance the demands on them. The church must provide an authentic Christian response. Some ideas:

Boomer parents and millennials will want programs to focus on improving society and making the world a better place. Generation X and their Generation Z children look for relevant, pragmatic approaches to solving problems that affect them personally.

This inside-out approach can change hearts and reconnect Gen X with a living Christ. As this happens, the world around the generations will be changed for the better.

This is part two of a four-part series examining how the church can tailor its approach to connect with current generations in relevant and meaningful ways. Stay tuned to MyCom for part three, uncovering ways to connect with millennials.

Eric Seiberling is part of a husband-wife duo working to help the church embody "1 > 99" at brokensheep.com. He leverages his 20+ years of marketing and consulting experience to help churches "baptize" and use secular techniques to be more effective at reaching the lost, the least and the last for Jesus Christ.