The Power and Significance of Symbols

Given the importance of the ordination ceremony, many clergy choose to wear a satin, silk or brocade fabric stole for their ceremony, but not the Rev. Carlos Samuel Reyes Rodriguez. Instead, Rev. Reyes Rodriguez wore a stole made with Mylar—the material used for blankets given to immigrants held at U.S. detention centers by the Department of Homeland Security.

“I found this material both confrontational and a motivator for me,” said Reyes Rodríguez, a Deacon within the Peninsula Delaware Annual Conference. “The stole also shows the sound [the blanket] makes. It is uncomfortable to fall asleep on. If you move, you can listen to it. If the other person next to you moves, you can listen to it… It may keep you warm but it keeps you awake.” 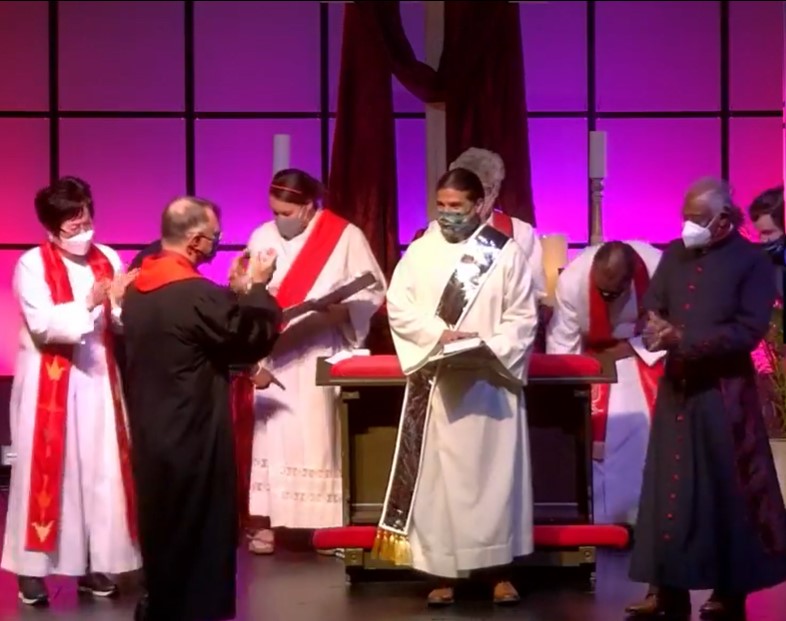 “Every time he hears the crinkling sound of that foil, it will remind him of his commitment and his calling to seek justice, to people and how urgent the gospel is.” –Bishop Peggy A. Johnson (You can view the ordination service and laying of the hands at minute 54).

While both ordained elders and deacons wear stoles, they wear them differently. Ordained elders wear the stole around the neck over both shoulders. Deacons on the other hand, wear the stole over their left shoulder across their chest. Reyes Rodríguez explained that the position of the stole could be compared to the position of a towel one would use to wash someone else’s feet, in reference to when Jesus washed his disciples’ feet. It represents how serving others manifests in acts that confront evil forces and expand the already given compassion and grace of God to those who have been marginalized or excluded from toxic interpretations of who God is.

Reyes Rodríguez’s stole is symbolic of something much deeper and more complex that an item or the material it is made from. “It is easy to get distracted or to get corrupted by our desires to climb up the stairs of socioeconomic stability, recognition and I think the stole reminds me that the commitment of the gospel is to be in that constant commitment of seeking justice. Of confronting evil forces. Of serving with compassion. Of reaching the world that is liberating. That is how the stole helps me. To remind me of Jesus’ walk.”

When we talk about symbolism and remembrance, it should “take us back to what Jesus did and who he was. It means walking with the people, confronting Pharisees and the Roman Empire. It means hanging out with those considered outcasts by the dominant culture, in the supremacy sense. It means walking with the poor and changing the pyramid of power. It is still a powerful symbol 2000 and plus years later. That is what symbolism is. It’s a way of which we go back, we are mindful of the present to hopefully change the future. The symbolism in the last supper and water of baptism has a tremendous power because it reminds us of who we are, who we belong to and what we are here for,” added Reyes Rodríguez.

He warns that symbolism can potentially be harmful, as it is subjective on the individual and their associations with a specific piece. “[The mylar stole] was powerful to those who are around me but meaningless to those who disagree,” said Reyes Rodriguez. 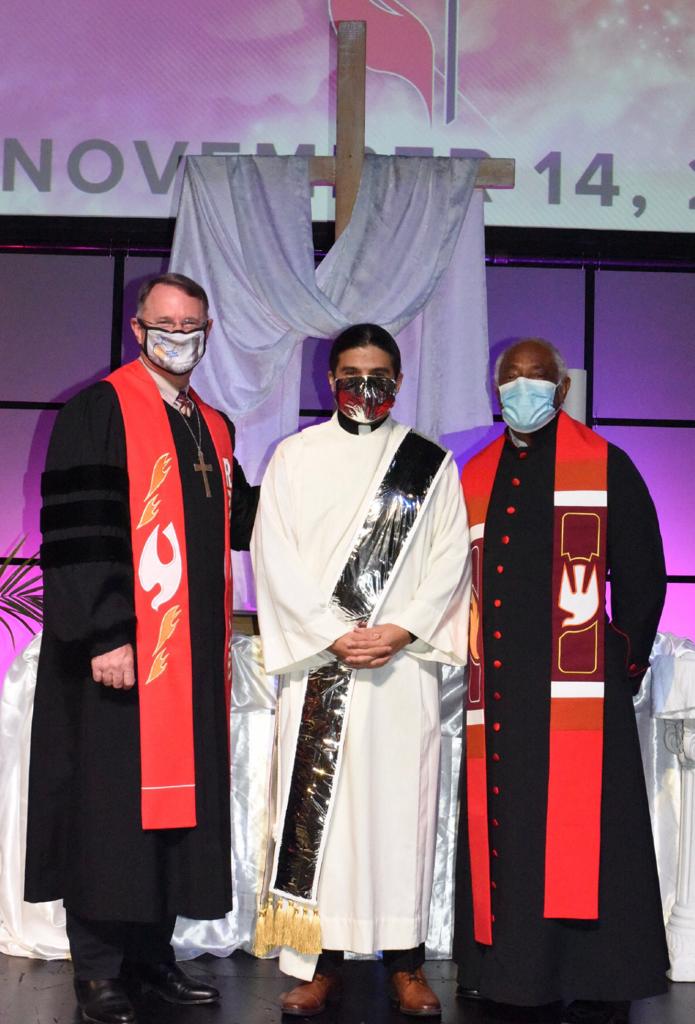 He compares experiences from his native country of Colombia to those in the United States. “For example, I haven’t seen an altar in our churches that doesn’t have the U.S. flag right next to the cross. So, what that symbolism means for many people in the church in the US is that somehow it has been interpreted that the ode to the flag is just as important as our communion with God, or with Christ. That for me is an idolization of the symbol. In Colombia, you put the nationalistic identity above everything else. But when we have a sense of superiority, it is contrary to what the Christian message is.”

For United Methodists, symbols, saying or images can help bring us back the root of spiritual life.

“If that symbol is helping to be in tune with God’s will, I think it is a very positive symbol. I think if it is not centered on liberation of creation, the symbolic power can become, easily, a way to idolatrize those items. And I think that Jesus’ ministry decentralized us from temples or from items that were just for the rich or those who were powerful.”

Rodríguez has not worn his stole since his ordination ceremony, but plans to use it during his next sermon via Zoom or the next time he assists in the administration of a sacrament, once COVID-19 restrictions are lifted. “I don’t think this new administration will stop the use of the blankets. We have to work regardless of who is in charge so our communities can be honored and respected, as God’s creation. We are humans with rights and we advocate for God’s justice to reclaim our identity.”

“God is a communal being and we are to reflect God. There are theological and social implications to that. I am committed to see how God is speaking to us to be the creation that we are meant to be. And that creation means to be a whole. To be in communion with God and one another. In fullness.”

Reyes Rodríguez claims that his call as a deacon is to continue seeking justice to a moment where there aren’t detention centers anymore, where children are no longer held in cages and when we can’t hear those Mylar blankets anymore.

Originally from Barranquilla, Colombia, Reyes Rodríguez believes that growing up with such a diverse family in creed, race, socio-economic positions and his previous involvement in political journalism have contributed to his resilient nature of seeking community and becoming the witness of a compassionate creation. Reyes Rodríguez is the oldest of two, has been married since 2015, loves salsa dancing and football. “The real football with your foot.”
Contact: [email protected].

Like what you're reading?  United Methodist Communications is celebrating 80 years of ministry! Your support ensures the latest denominational news, dynamic stories and informative articles will continue to connect our global community.  Make a tax-deductible donation at ResourceUMC.org/GiveUMCom.