BUKAVU, Democratic Republic of Congo (UMNS) — Communicators in Africa are using text alerts as a tool for evangelism and to share news of The United Methodist Church. The UMConnect group messaging system also is being used to promote better health in the community.

The agency began training communicators in the Democratic Republic of Congo in 2016 and it continues to roll out the texting system in other regions, including through recent training in Ndola, Zambia, in late 2017, and in Maputo, Mozambique, in April. Another training will take place in West Africa later this year.

“UMConnect is a powerful tool for reaching United Methodists where they are and connects the church in a unique and unprecedented way,” said Ashley Gish, director of strategy for global communications technology at United Methodist Communications. “We are constantly evaluating how we can make the platform even more effective, and our central conference communicators have been key to that process.”

The program that became UMConnect originated during the 2014 Ebola crisis, when the communications agency helped church leaders in Sierra Leone and Liberia send health information and messages of hope through a group text-messaging system.

It also was a useful tool during the 2016 General Conference in Portland, Oregon, allowing The United Methodist Church to send key messages to those who weren’t able to attend.

Close to 4,000 contacts in 12 African countries received the text messages, written in French, English, Portuguese and Swahili. More than 80,000 messages were sent during the two-week period. Communicators from central conferences in Africa facilitated the collection of mobile numbers and dissemination of news updates.

“I did not go to the United States because I was not a delegate, but every day I received the message from the General Conference, something I have never seen,” said the Rev.  Kalema Tambwe, district superintendent of the Kindu South district. 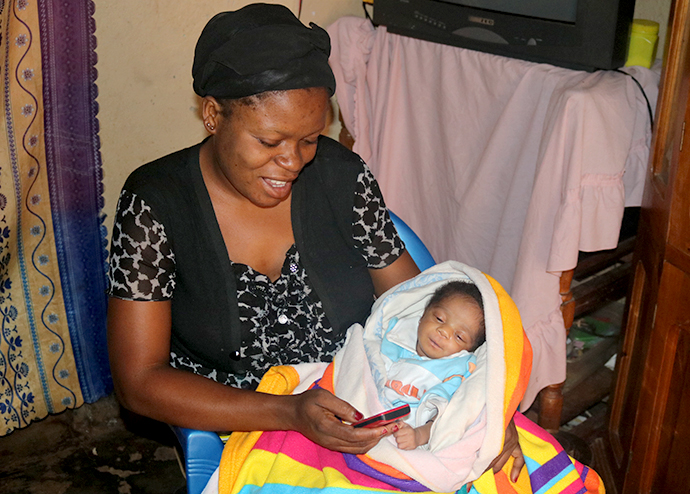 Safi Zamuda holds her baby while looking at a text from the United Methodist Health Center in Irambo, Democratic Republic of Congo. As part of the UMConnect program, the hospital sends alerts to new and expectant mothers to remind them of upcoming appointments. Zamuda said she is thankful for the messages and her healthy child. Photo by Philippe Kituka Lolonga, UMNS.

He said the system also will be helpful during next year’s special General Conference in St. Louis, which will address the denomination’s divisions over homosexuality.

In Bukavu, the messaging system helps pregnant women and new mothers to remember their appointments at the United Methodist Health Center in Irambo.

The hospital works in collaboration with the communications department in East Congo to gather phone numbers and craft and send text alerts.

For Gracia Wakusomba, a pregnant mother of three who lives in Irambo, the texts from the hospital are helpful reminders to make prenatal and post-natal appointments.

“I had lost my eldest son because I didn’t go to the hospital for the post-natal consultation. (He) was the victim of several diseases because I had not respected the vaccination schedule. Today, with this system, I will never miss it,” she said.

Safi Zamuda, also a resident of Irambo, is thankful for the alerts she received during her pregnancy.

“I had a high-risk pregnancy, but with the messages I received … it allowed me to follow up each time,” she said holding her baby.

Dr. Damas Lushima, a doctor at the Irambo facility, said the UMConnect system is helping with the United Methodist Board of Global Ministries’ Abundant Health initiative, which emphasizes maternal and child health in developing countries, specifically reducing complications around birth and infectious diseases such as malaria, pneumonia, diarrhea and HIV.

“We remind mothers to keep their appointments,” Lushima said. “This in the framework to save lives because we want to bring our mothers in the region to be regularly consulted during pregnancy and to respect the vaccination schedule of their children from 0 to 5 years old.”

He said he’s thankful to East Congo Bishop Gabriel Yemba Unda for his personal involvement with the UMConnect messaging system and pledged to work closely with The United Methodist Church’s communications department to continue the collaboration.

The hospital helps with some of the fees associated with sending the alerts.

Chadrack Londe Tambwe, a communicator for the East Congo Conference, has been experimenting with the UMConnect system since 2017 to raise awareness about the stigma associated with rape in the country and as an evangelism tool.

He currently has about 450 contacts who receive messages.

“The pastors of my conference gave me the passages with verses that I sent to people through this system and this contributed to the advancement of evangelism in my conference, because every Sunday in our local churches, we receive new believers who come through the messages we send,” he said.

Sharing biblical verses, he said, also brings hope to women who have been raped, as well as those facing other hardships.

“The message that I get in my phone for evangelism, it gives me hope and it comforts me,” said Amunazo Kingombe, a United Methodist woman in the Goma District.

Londe also has plans to work with The Sanru rural health program in the DRC to help raise awareness about epidemics such as cholera in the province of Maniema.

Pierre Omadjela, a field project manager for United Methodist Communications serving in the Congo Central Conference, said the messaging system allows communicators to divulge the information of the church quickly.

“(It) allows those who do not have easy access to the internet to follow at the same time the major church activities at the local level, but also at the regional and global levels,” he said.

Kituka Lolonga is a communicator in the Kivu Conference. Originally published by United Methodist News Service, May 1, 2018.

If you believe in our mission, please make a tax-deductible donation to United Methodist Communications through its Foundation.