“Just” a Deacon – Ministry That Matters

My name is the Rev. Jeania Ree Moore and I am a deacon commissioned to a ministry of word, service, compassion, and justice by the California-Pacific Annual Conference of The United Methodist Church (UMC).

I serve as the Director of Civil and Human Rights at the General Board of Church and Society in Washington, D.C., where I advocate on behalf of the church for a myriad of issues (immigrant, migrant, and refugee justice; gun violence prevention; criminal justice reform; ending the death penalty; and other justice issues on which The UMC has spoken). I also connect with and support United Methodists around the world who are working for justice in their contexts.

It is a busy job and an incredible one. I am thankful for the witness and work of the church, my colleagues, and the millions of United Methodists and people of faith and goodwill working daily for justice and peace. I could not do this ministry without so many others! 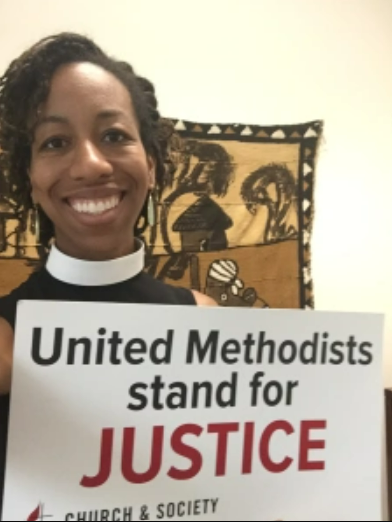 I am one of those people who did not go to seminary to get ordained, and wound up on the ordination track anyway. When entering seminary at Candler School of Theology, Emory University, I knew that I was neither called to nor interested in working in a local parish setting. What I did not know, however, was how seminary would identify and further develop the ways in which I am called to ministry – that is, through justice work and education.

While at Candler, I had several transformative experiences working with, teaching, and advocating for justice for women incarcerated at Lee Arrendale State Prison, Georgia’s largest maximum security prison for women. These experiences showed me my gifts and the ways in which God empowers me to do things I had never imagined. This led me to embrace a call to the Order of Deacon.

Favorite thing about being a deacon

One of my friends is a deacon and an art therapist whose practice serves LGBTQIA youth of color, HIV/AIDS clients, and homeless individuals. Other deacons I know of are lawyers, educators, chaplains, and specialized ministers. The work of deacons outside the church, and in overlooked places and spaces inside the church, is vital for both church and world. Our vocations are reminders to the world—and, often, to the church—that God’s good news necessarily goes far, wide, and is embodied in different ways and professions.

Why it’s important to celebrate the work of the deacon

Given that I was uninterested in parish ministry and had no problems with a less prominent role in church politics, her comment did not sway me. It did, however, alert me to a harmful dynamic I have continued to encounter: the idea that deacon’s work is “less than,” or is not “real” ministry, or is not the ministry that matters. Just recently, a colleague and friend of mine inadvertently described another clergyperson to me as “just a deacon” and “not actually a Reverend” (rest assured, I corrected my colleague – we are not “just” anything, and we are indeed Reverends!).

This conception of deacon’s work as “less than,” as not “real” ministry, or as not the ministry that matters, is clearly sexist, rooted in gendered views of the options and appropriate roles for women doing the work of God. This conception of deacon’s work is also incorrect – the work of deacons is real ministry, is not less than other ministries, and is the ministry that matters.

Speaking personally, it matters that I am commissioned as a clergyperson by my church to preach, serve, and do work of justice and compassion in support of just and restorative policies on Capitol Hill in Washington, D.C. Speaking up for God’s vision of a just society at the heart of national and international politics, matters.

I am glad for the opportunity to do this work, and to uplift the vital work and role of deacons everywhere.

Her work on civil and human rights centers on upholding human dignity, and engages emphases — such as racial justice — which support that dignity.

Jeania Ree feels called to ministries of justice and compassion through advocacy and theological education. Having experienced activism as faithful witness, she believes that in this work of faith-based advocacy, we both give and receive God’s grace. Jeania Ree hopes to have an impact not simply on an issue, but also on the people involved in advocating.

A graduate of the Candler School of Theology and the University of Cambridge, Jeania Ree is a commissioned deacon in the California-Pacific Conference.