Only one-fifth of U.S. conference leaders are women

‘Stained-glass ceiling’ remains in The UMC

Women hold 22% of the chancellor (attorney), director of connectional ministries (DCM), and treasurer positions in the annual conferences across the U.S. United Methodist Church (Table I).1 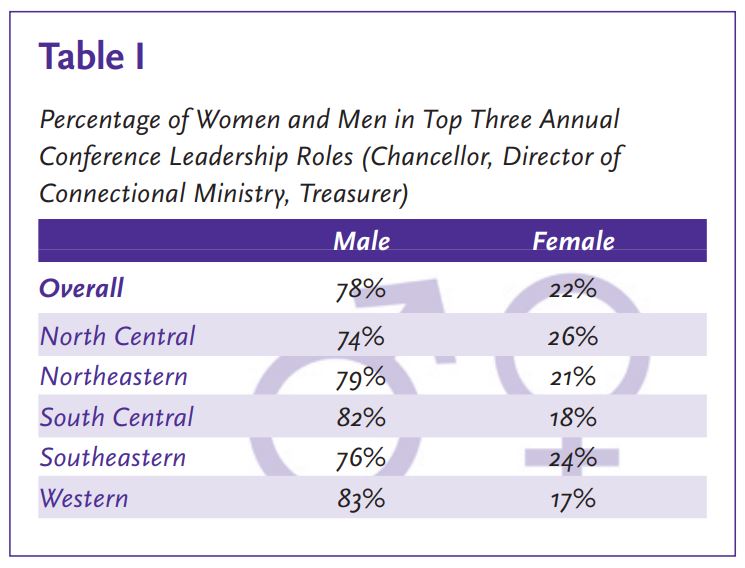 This percentage mirrors the percentage of women district superintendents and clergywomen in the denomination. According to these numbers, although women comprise 60% of the denomination’s membership, they only hold one-fifth of the top leadership positions in U.S. annual conferences. 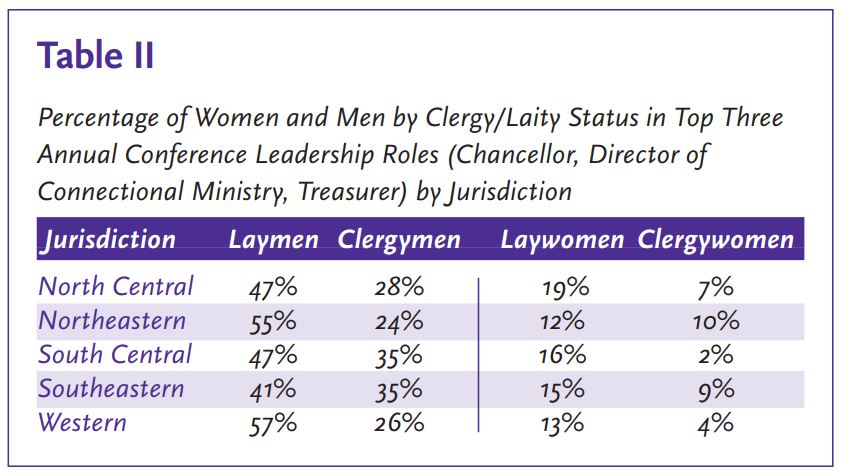 With the exception of the Northeastern Jurisdiction, the percentage of clergywomen serving in these leadership positions is less than 10%. Likewise, laywomen have less than 20% representation in these three positions. By comparison, men—lay and clergy— remain at 24% or better throughout all five jurisdictions. In other words, the men’s lowest percentages are still greater than women’s highest percentages. 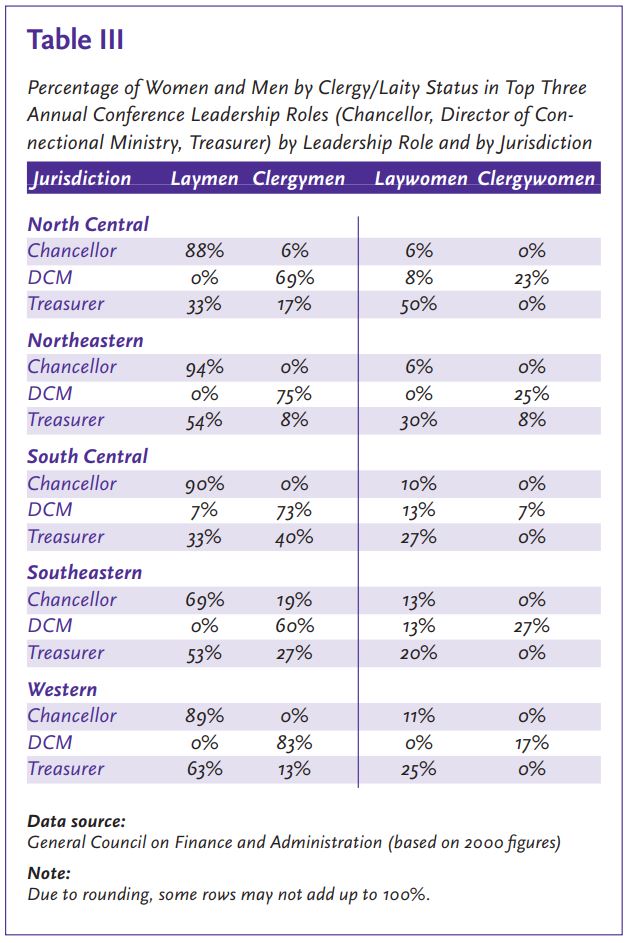 Clergywomen, on the other hand, are more likely to serve as directors of connectional ministries (DCMs), although there are slightly fewer clergywomen DCMs than women treasurers. Whereas laywomen hold 20% or more of the conference treasurer positions, clergywomen hold 20% or more of the DCM positions in three jurisdictions: Southeastern (27%); Northeastern (25%); and North Central (23%). In the Western Jurisdiction, clergywomen account for only 17% of the directors of connectional ministries and only 7% of DCMs in the Southeastern Jurisdiction. Overall, laywomen are more likely than their clergy sisters to find employment at the upper levels of annual conferences.

Some might argue that the lack of women in these leadership positions is not all that problematic since both clergywomen and laywomen are increasingly well represented as delegates to the General Conference, the denomination’s highest decision-making body. (Of the 1,000 international delegates to the 2004 General Conference—half clergy, half lay— 34% of clergy delegates were women, 51% of lay delegates were women.) However, the General Conference only meets for two weeks every four years to establish churchwide programs, budgets, and policies. Annual conferences meet annually, and their staff members carry out the day-to-day implementation of those budgets and program priorities.

Therefore, while women are increasingly involved in setting the big-picture course for the church, their voices are still greatly diminished at the place where we influence and live out our faith and work. For the most part, the leadership of annual conferences has been entrusted to men.

What if women were placed in these positions of authority? What new insights would they bring? What new ways of doing things might they introduce?

Craig This is part of the Center for Applied Social Issues at Sinclair Community College.
1 Not all U.S. annual conferences employ full-time chancellors; some employ part-time lawyers or contract for services as needed. The issue is not the status of that individual (full or part time), but rather the gender of a person that serves in a leadership position. This is similar to the categories of clergy in The United Methodist Church (Elder in Full Connection, Deacon in Full Connection, Full-time Local Pastor, Part-time Local Pastor, etc.) and the previous issues of The Flyer that dealt with clergywomen in the church. Included in that previous study were part-time and full-time local pastors as well as ordained elders and deacons. The question was not what clergy category that women had achieved, but rather the percentage of women “designated” as clergy. So, too, it is with the top three positions in an annual conference—chancellor, connectional ministries director, and treasurer. The issue is not so much which position women hold—although that is important—but rather are women being allowed to hold any of these positions, full-time or part-time? The question is, are women being allowed to serve in positions of authority?