So far, 10% of elected clergy delegates are deacons

At the request of a reader, I did more research on the General Conference delegates elected so far this year in the U.S. and determined that only 4 of those 42 clergy members are deacons (less than 10%). By comparison, deacons in full connection make up less than 4% of United Methodist clergy compared to 71% elders in full connection (the other 25% are part -and full-time local pastors and associated members.)

Those numbers mean that so far, deacons are well represented as General Conference delegates compared to their portion of the clergy population. However, men who are deacons are overrepresented. Men currently make up half of the elected deacons, but as they next chart shows, they make up less than a quarter of the order.

Some might argue that a larger participation rate among deacons is unnecessary in the delegations to General Conference because it is the elders who are called to administer the provisions of the discipline (Book of Discipline ¶340.2a). However, this argument Does not hold water. Lay people are elected to General Conference as well and are not held to the same standard, while local licensed pastors are held to the same standard but may not be elected General Conference delegates. Deacons’ voices are vital at General Conference as they help the church define our ministry and interpret the Four Areas of Focus. They are called to ‘leading congregations in interpreting the needs, concerns, and hopes of the world’ (BOD ¶328).

Why do so few people choose to be deacons? And of the people who do pursue deaconship, why are more than three quarters of them women?

Many people who choose the path of deacon say they are discouraged from doing so and instead are encouraged to pursue ordination as elders: men because the order of elder begets prestige and authority, and women because people believe they should aspire to what men want, to reach the “top.”

There is this idea that elders function in a “head of the household” type of role in that they administer sacraments and keep order. Deacons are viewed more as helpers or servants. Living in a culture where the overarching expectations place men in authoritative, administrative roles makes it difficult for people to picture men as being adequately fulfilled in a role that is defined by exclusion from headship. But it is more fitting to see the role of deacon as by specialization, compassion, and justice. 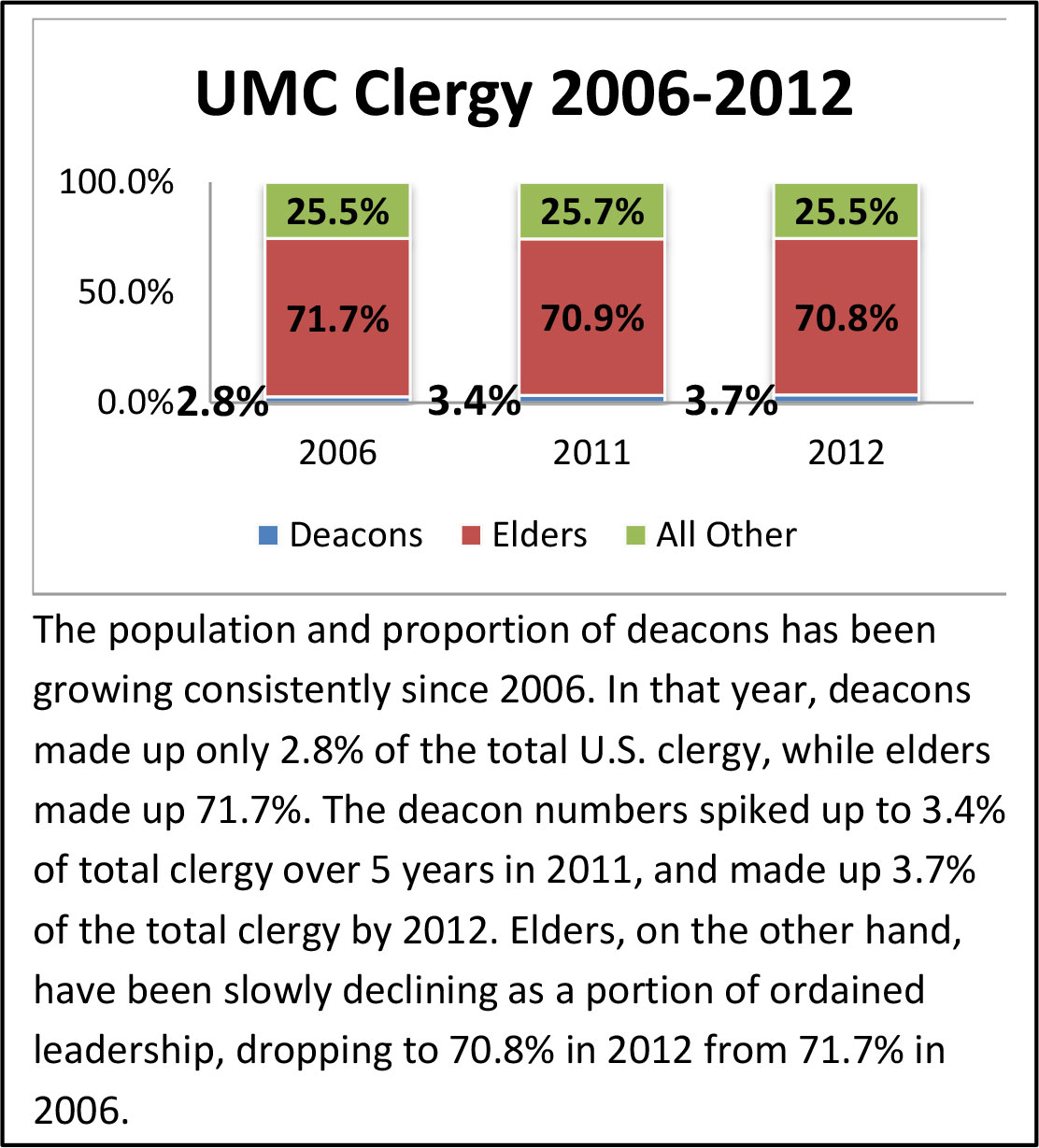 This gender divide within similar job descriptions is not isolated to The United Methodist Church. In the medical field, nursing is more often pursued by women than men, and men who elect to pursue nursing are questioned. Shouldn’t they want to be doctors? Nursing is for women. Doctors make decisions and prescribe medication, but nurses do the caring work. However, when men began to enter the field of nursing at higher rates, overall wages increased. Unfortunately, a wage gap between the genders still occurred. In 2013, the average female nurse’s salary was $9,600 less a year than a male’ nurse’s salary of $60,700 even though only 9.6% of nurses are men.

Devaluation of women’s work can lead to the feminization of poverty: “There is a systematic undervaluation of professions where women are heavily represented: whether it’s fast food work (skews female by 13% among adult workers), teaching (70% women) or nursing (over 90%), the pay is often not enough to really live comfortably on, or accurately reflect the value of the work.”

Our society places more value on work that comes with a prestigious title and a high salary. Traditionally, this has not occurred with many careers in which women are the majority (social workers, day care professionals, nurses, teachers, etc.). When we devalue feminized labor, it means that we don’t consider women’s work ‘real’ work and that we think that some work is only for women, and therefore requires less skill. Generally speaking, work that is considered women’s work is grossly undervalued or devalued. Christine Yvette Lewis discussed this issue with Stephen Colbert on the Colbert Report in 2011. Domestic care workers like nannies and housekeepers are isolated and have few resources to demand fair wages, benefits, and protections. Similarly, deacons are underpaid compared to their counterparts (despite the requirement in BOD ¶331.10b that the benefits and salaries among elders and deacons are to be the same within congregational ministry) and have no guaranteed employment.* The move to reclaim the diaconate as full and equal ordained members of the clergy in 1996 was a great step for The United Methodist Church to take as it professionalized the ministry of many women in the denomination.

This does not mean, however, that only women should pursue ordination as deacons. Men and women who feel called to word, service, compassion and justice should receive the encouragement to pursue deaconship without regards to gender. For a resource on this, click here.

How does your community honor its deacons?

What can the deacons in your community contribute to General Conference?

If you want to respond to these discussion questions, or if you have an idea for an article or research, email Erin Kane, our director of research and monitoring.

*From page 18 of this document: Deacons have an 18% lower salary when controlled for time in ministry, parsonage, gender, race, etc. Guaranteed appointment is a luxury that is very much sought after, but without it, many deacons are able to pursue ministries and positions with more freedom and flexibility than elders. In addition, many deacons may choose to work in unpaid or low-wage ministries that help them to do work with impoverished populations, which also influences salary differences between these two orders. However the guaranteed appointment has given elders more priority in administrative terms, a policy with the unforeseen consequence of attributing prestige to one order and not others.

If you’re considering a run for 2016 or 2020 General Conference delegate, check out our step-by-step guide here.

Women and leadership in higher education institutions of The UMC.