Bishops serve in our church’s highest leadership role, providing spiritual and institutional guidance both within their Annual Conference and across the connection. Given bishops’ importance to the well-being and direction of the church, it seems important that a diversity of perspectives and experiences be represented among them.

What’s more, the possibility that a diverse array of churchgoers might find themselves represented among UMC bishops is not insignificant: the ability to imagine oneself in a particular leadership role can help to encourage individuals to pursue a vocational calling. This post initiates a series that will explore the gender and racial demographics of our bishops, as well as how those demographics compare with other UMC leadership roles and the impact of a given bishop’s gender and racial/ethnic identity on the presence of historically underrepresented groups in other leadership roles. First, however, we’ll look at the demographics of bishops themselves.

The majority of bishops are men: 72% of bishops are male and 28% are female. While these statistics mean that almost one-third of bishops are female, we must consider the context of the church. Among laity, women represent 58% of the UMC. The fact that representation among bishops lags behind the portion of women in the church could arise from several factors, not least among them the reality that fewer women seek ordination as an elder than men do. But even this smaller pool of potential female candidates for bishop should give pause: does God call fewer women to ordained ministry, or do particular features of our church and society – whether belief, tradition, practice, or policy – coalesce to discourage women from following their call, or, once ordained, from being willing to take a leadership role that might lead to becoming a bishop? Do the structures and policies of our church foster women’s full participation in the leadership of the church?

Bishop demographics introduce a divergence from patterns we have encountered among other leadership groups. Rather than a stronger proportion of women among bishops, we find a larger collective presence of those who identify with non-white racial/ethnic groups: 37% of bishops identify with a minority racial/ethnic group, nearly ten percent more than are women. The more detailed race/ethnicity chart does, however, illustrate that some groups are missing, and that much of the diversity is found through the presence of Asian (13%) and Black (20%) bishops. The remaining 4% are Hispanic. Finally, 63% of bishops are white. 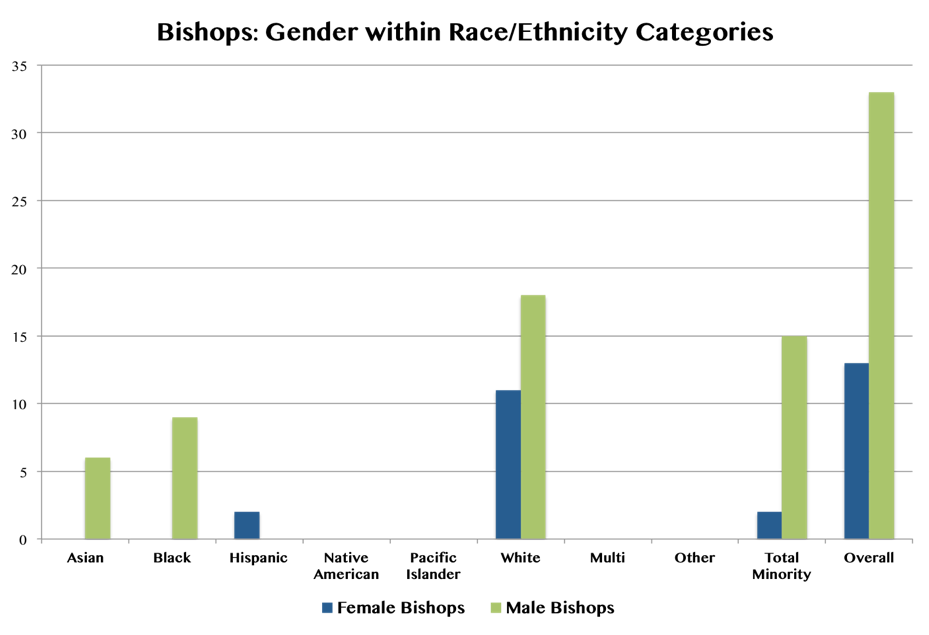 Among bishops, are historically under-represented groups – women and minority racial/ethnic identities – evenly distributed across jurisdictions? Does geography impact diversity within the ranks of bishops? Finally, how does the geographic distribution of bishops correspond with that of other annual conference leaders? 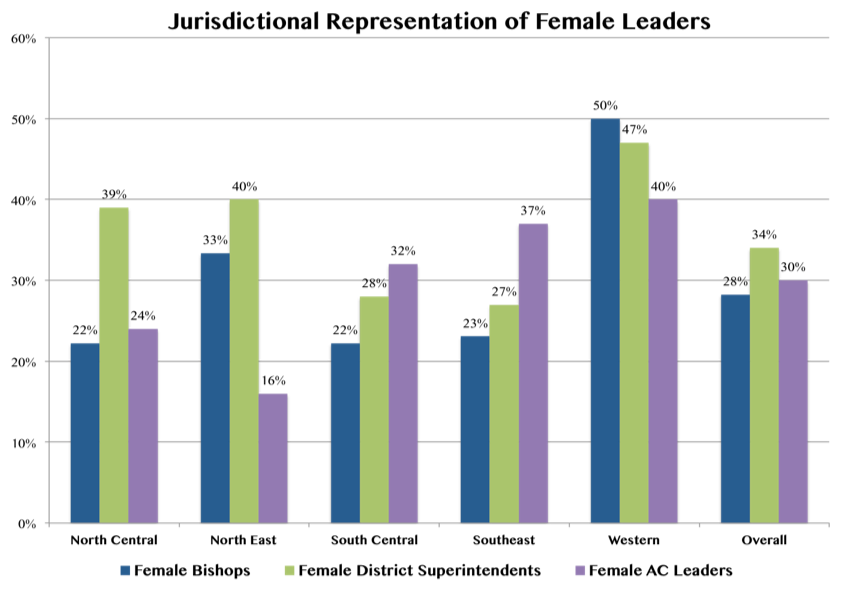 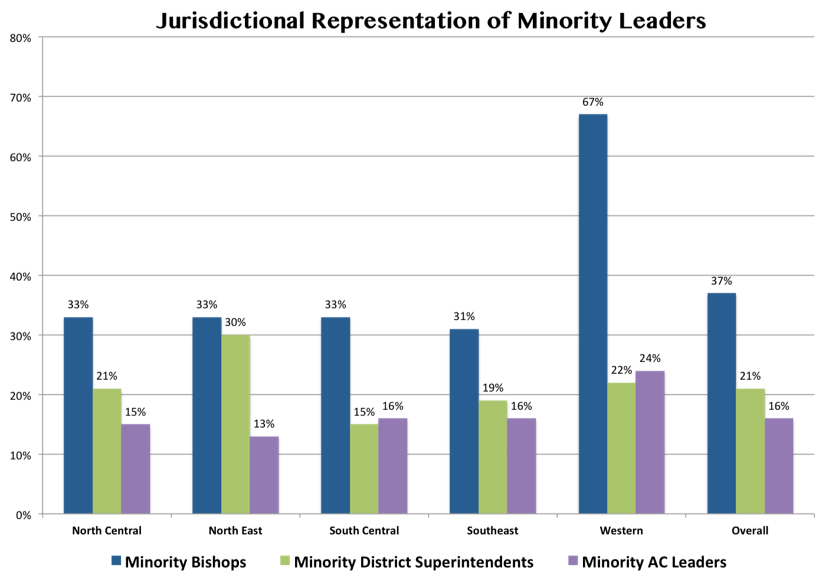 Why is it that we are more likely to find a bishop who identifies with a minority racial/ethnic group than a district superintendent or AC leader? Why does this trend hold true across jurisdictions?

Bishops play an extensive role in the appointment and election of other church leaders, often directly controlling who takes a particular position as well as recommending other candidates. Among the positions impacted by bishops are those discussed in previous posts: district superintendents, directors of connectional ministries, chancellors, and treasurers. The following charts explore relationships between bishop appointments and that of other annual conference leaders. 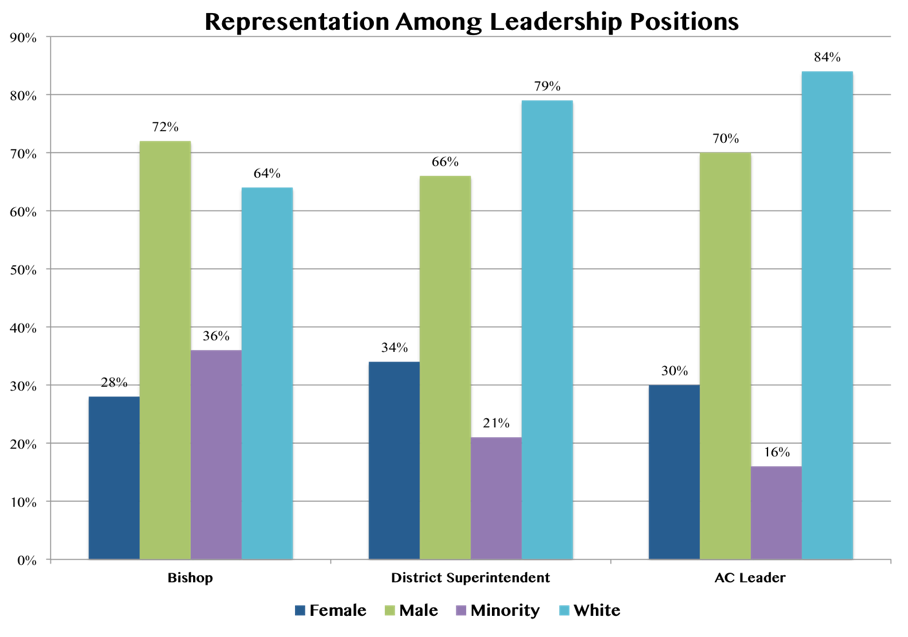 What’s most important in this chart, however, are not the specific numbers themselves, but how the different columns compare across groups: within each type of AC leadership position, what changes when the demographic identity of the bishop shifts? 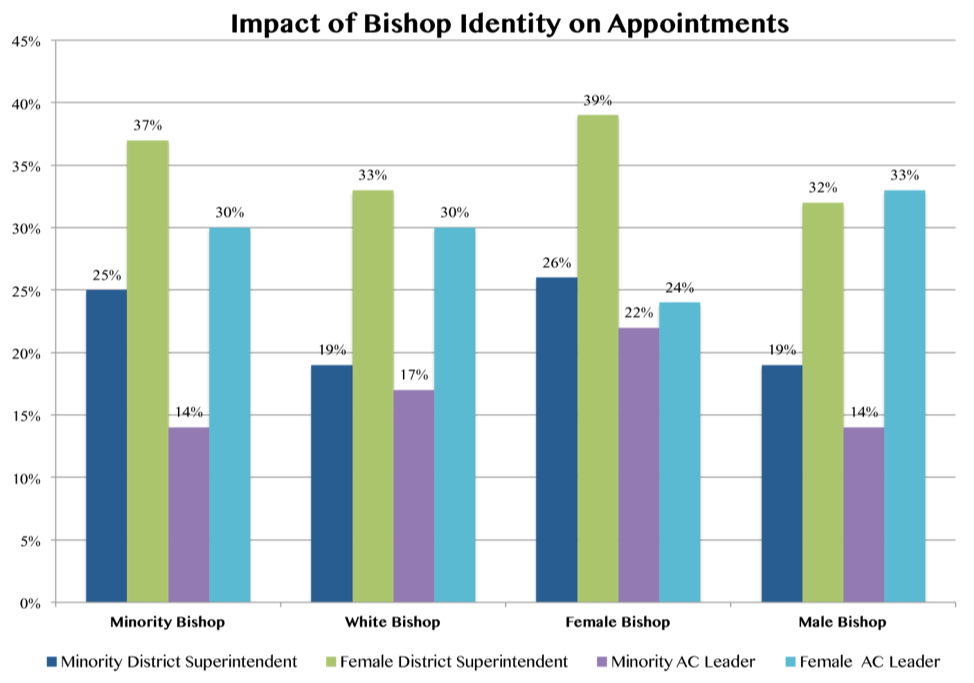 Why should the demographic makeup of district superintendents and AC leaders have anything to do with the demographic identity of bishops? As we see in this chart, at times bishop identity does not have an impact. But this chart was created to determine if, based on descriptive statistics, it seems that bishops who themselves identify with a historically under-represented group might signal more openness to non-normative (that is, non-white or non-male) persons holding leadership roles. On the other hand, a minority or female bishop could worry about appointing too many other non-white and/or non-male leaders, erring in a normative, non-representative direction. Still another possibility is that the presence of a minority or female bishop becomes tokenized, their leadership presence suggesting to the AC that “enough” representation of historically marginalized groups has been achieved. While the chart does not provide us with enough evidence for causality in the appointment of minority and female DSs and AC leaders, or even ensure a relationship between bishop identity and such appointments, it does give us a starting point in thinking about such possibilities. Minority and female district superintendents tend to have a stronger presence by percentage when a minority or female bishop leads; might that reality correspond with the fact that bishops hold direct control over who becomes a district superintendent through their appointment, whereas the AC leaders discussed in this series are sometimes appointed, sometimes elected?