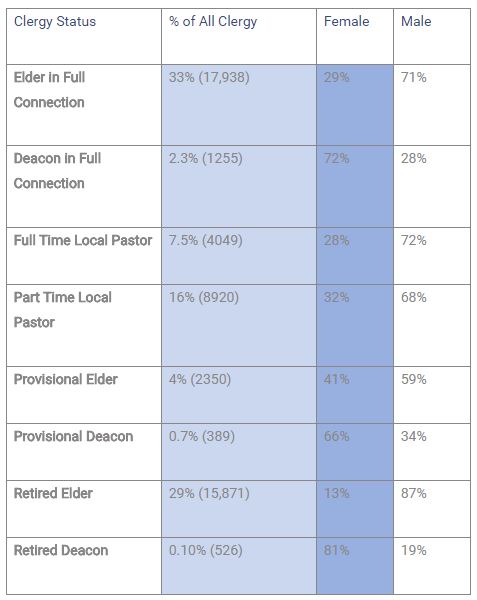 United Methodist Clergy by the numbers

In Chart B, overall most clergy serve as elders in full connection (33%). Retired elders make up 29% and part-time local pastors make up 16%. Among woman, the highest percentage serve as deacons (72% of all deacons are women) or retired deacons (81% of retired deacons are women), with the second largest number of women serving as part-time local pastors (32%) and then elders in full connection (29%).

The largest number of clergymen are retired elders at 87%, with full-time local pastors (72%) and elders in full connection (71%) a close second and almost equal in number. There are more active women elders (29%) than retired elders (13%), the highest number of active female elders in history.

United Methodist Clergywomen by the Numbers

When you consider just the female clergy population, as in Chart C below, of the 27% of all clergy that are women, half of them are either elders in full connection (35%) or part time local pastors (20%). Only 6% of female clergy are deacons in full connection. 17% of women are retired elders or deacons while 8.1% of women are provisional elders or deacons. 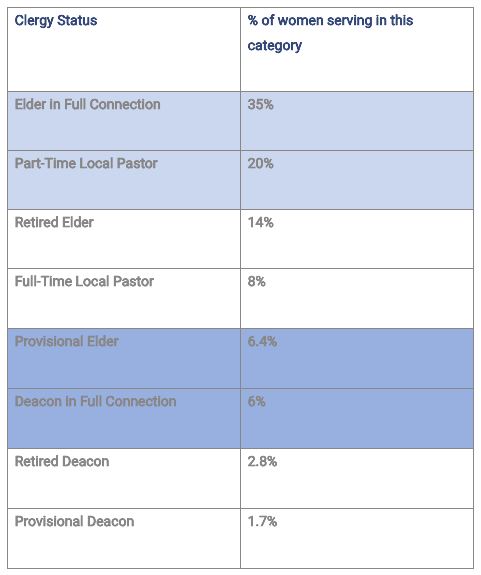 *percentage does not equal 100% because 6.1% of other clergy status categories not included

So where are clergypersons serving if not in full connection roles?

After active and retire elder in full connection categories (62%), the next highest number of clergy fall into the category of Full (7.5%) or Part-Time (16%) Local Pastors (23.50% total).

The Book of Discipline defines a local pastor in paragraph 316 as someone licensed by the annual conference’s Board of Ordained Ministry “to perform all duties of a pastor, including the sacraments of baptism and Holy Communion as well as the service of marriage (where state laws allow), burial, confirmation, and membership reception, within and while appointed to a particular charge or extension ministry.”

Where are all the young clergy?

According to the most recent “ Clergy Age Trends in The United Methodist Church 2014” report from the Lewis Center, the number of active elders “continues to decline” while the “number of local pastors grows.” The study states that there are 6,123 fewer elders and 3,459 more local pastors since 1990. In addition, elders between the ages of 35 to 54 are shrinking each year. In 2000, 65% of active elders were in this age group, while in 2014, that percentage dropped to 39%. Even smaller still are the numbers of clergy under the age of 35: 6% of elders, 9% of deacons and 8% of local pastors. A note of encouragement for female clergy is that of the 6% of elders under the age of 35, 39% of those are female. Though more young women are deacons (more than 75%), younger men (three-quarters) are local pastors. The number of female elders under the age of 35 has increased from 38% in 2013 to 39% in 2014, while the number of male elders in this age group remained stagnant at 70% from 2013 to 2014, and actually dropped one percentage point from 71% in 2012. While this movement is favorable for young female elders, the rate of growth is low. In addition, it seems United Methodist clergy overall are getting older and retiring, while the numbers of younger clergy are also shrinking each year.

In summary, of the 12 million United Methodist church members, 54% are women and women comprise 27% of all clergypersons in denomination [1] . While the number of clergywomen is up from previous years, the growth seems to be modest.

A link to the Lewis Center report on Clergy Age Trends in The United Methodist Church can be found here:
https://www.churchleadership.com/clergyage/

[1] See Women By the Numbers, February 2015: Beyond the Stained-Glass Ceiling, GCSRW