Who are the U.S. delegation leaders for the 2012 General Conference?

Clergy still outnumber laity 34 to 23 as chairs of delegations to the 2012 General Conference (see Table 1). Only the Western Jurisdiction has more laity than clergy chairs; the Northeastern Jurisdiction is evenly divided between laity and clergy.

Of the 57 U.S. chairs, 32 are male (56%) and the 25 are female (44%). Coincidentally, the male-female percentage of chairs is exactly the same as the overall U.S. jurisdictional representation of males and females to the 2012 General Conference. Two of the five jurisdictions—North Central and Western—have more female chairs than male chairs (see Table 2).

Of the 15 persons of color, four are women: two laywomen and two clergywomen. The 11 men are divided into seven clergy and four laity (see Table 3). Women, who are persons of color, represent just 7% of the total chairs of delegations.

In the February 2012 issue, some of the tables in Women by the Numbers were mislabeled. Please download the corrected version of the tables at www.gcsrw.org.

Since clergy have the largest representation of the delegation chairs, it should come as no surprise that the top two occupations are pastor and district superintendent. “Retired” is the third largest occupation and it reflects the overall make-up of laity who attend General Conference who need two weeks to dedicate to the work of the church.

Being elected chairperson of a delegation does bring with it the pressures of leadership and administration. However, one of the benefits of being elected chair is usually the ability to have the first choice of legislative committee assignment. The Global Ministries Legislative Committee is the most popular for chairpersons, with nine chairs. Ministry and Higher Education and Financial Administration are next popular, with seven chairs each. All the legislative committees have at least one delegation chair with the exception of one: independent commissions.

Chairing an annual conference delegation comes with considerable responsibility and, frankly, considerable prestige and influence. Clergy chairpersons are often endorsed as episcopal candidates and, subsequently, are elected as bishops. That prestige and responsibility is still largely in the hands of men and white U.S. people, so it begs the question, “Is The United Methodist Church preparing and elevating leaders to relate to the people of God now and into the future?”

Craig This is data analyst at Wright State University in Dayton, Ohio.

Who are on which General Conference legislative committees?

Each of the nearly 1,000 delegates elected by annual conferences to General Conference is assigned to one of 13 legislative committees. These committees review and make recommendations on the more than 1,600 petitions submitted from across The United Methodist Church for consideration by the lawmaking assembly.

While it may not be possible to predict how delegates as a body will act on a particular piece of legislation, the demographics of the General Conference as a whole—as well as the demographics of each legislative committee—offer some insight into the perspectives that are (or are not) represented at the high decisionmaking tables of our denomination

General Conference requires that half of all delegates be laity, the other half clergy. This is not the case with legislative committees.

White clergymen are more likely than white clergywomen or clergypersons and laity of color to be elected in the first or second position (see Table 1). Most noticeable is the election of laypersons where white laymen and laywomen have their largest percentage of individuals elected first in their delegations.

General Conference requires that half of all delegates be laity, the other half clergy. This is not the case with legislative committees, however. In fact, among U.S. delegates, clergypersons comprise the majority of members in three committees: Faith and Order, Ministry and Higher Education, and Superintendency (see Table 2). More than one-third (37%) of all U.S. clergy delegates are concentrated in those three committees. The largest percentage of lay delegates are represented in the Financial Administration committee (11%), followed by Church and Society #1 (10%), Discipleship (10%) and General Administration (10%).

Men outnumber women at General Conference (56% to 44%), so it is no surprise that men hold a majority of seats in eight out of the total 13 committees (see Table 3). Women hold a majority of seats in three legislative committees—Church and Society 1, Global Ministries and Independent Commissions. The other two committees, men and women have an even split – Church and Society 2 and Superintendency.

Clergymen and clergywomen have the highest representation in the Higher Education and Ministry committee (Table 4). Laymen have their highest concentration in Financial Administration and laywomen in Church and Society.

Craig This is data analyst at Wright State University in Dayton, Ohio. 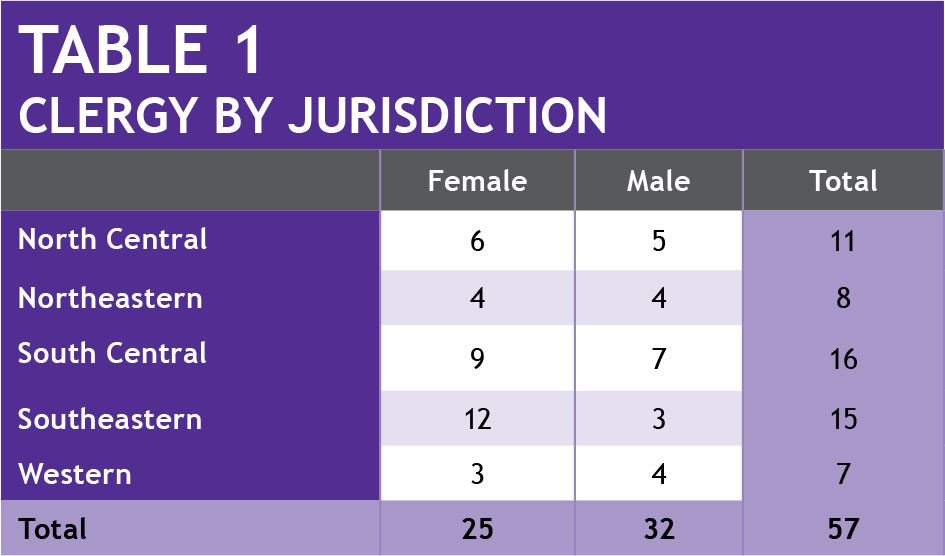 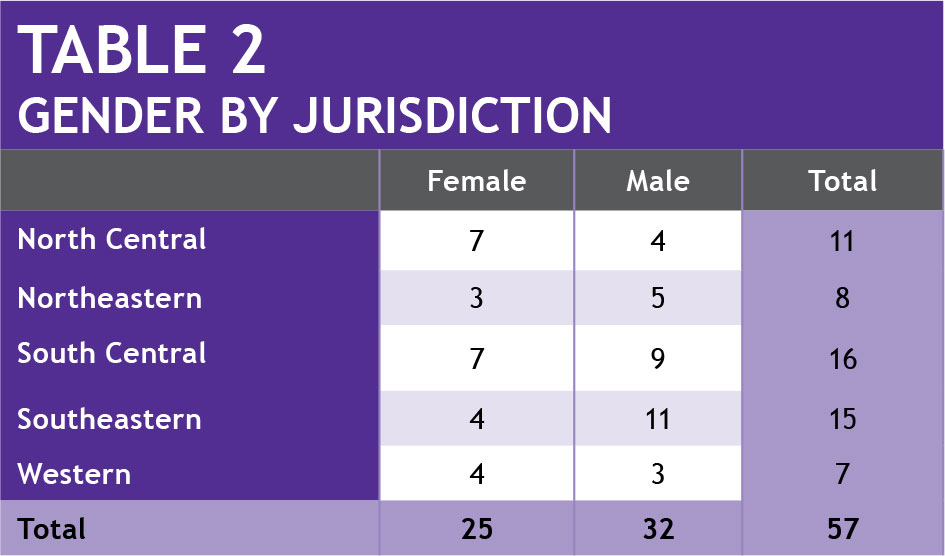 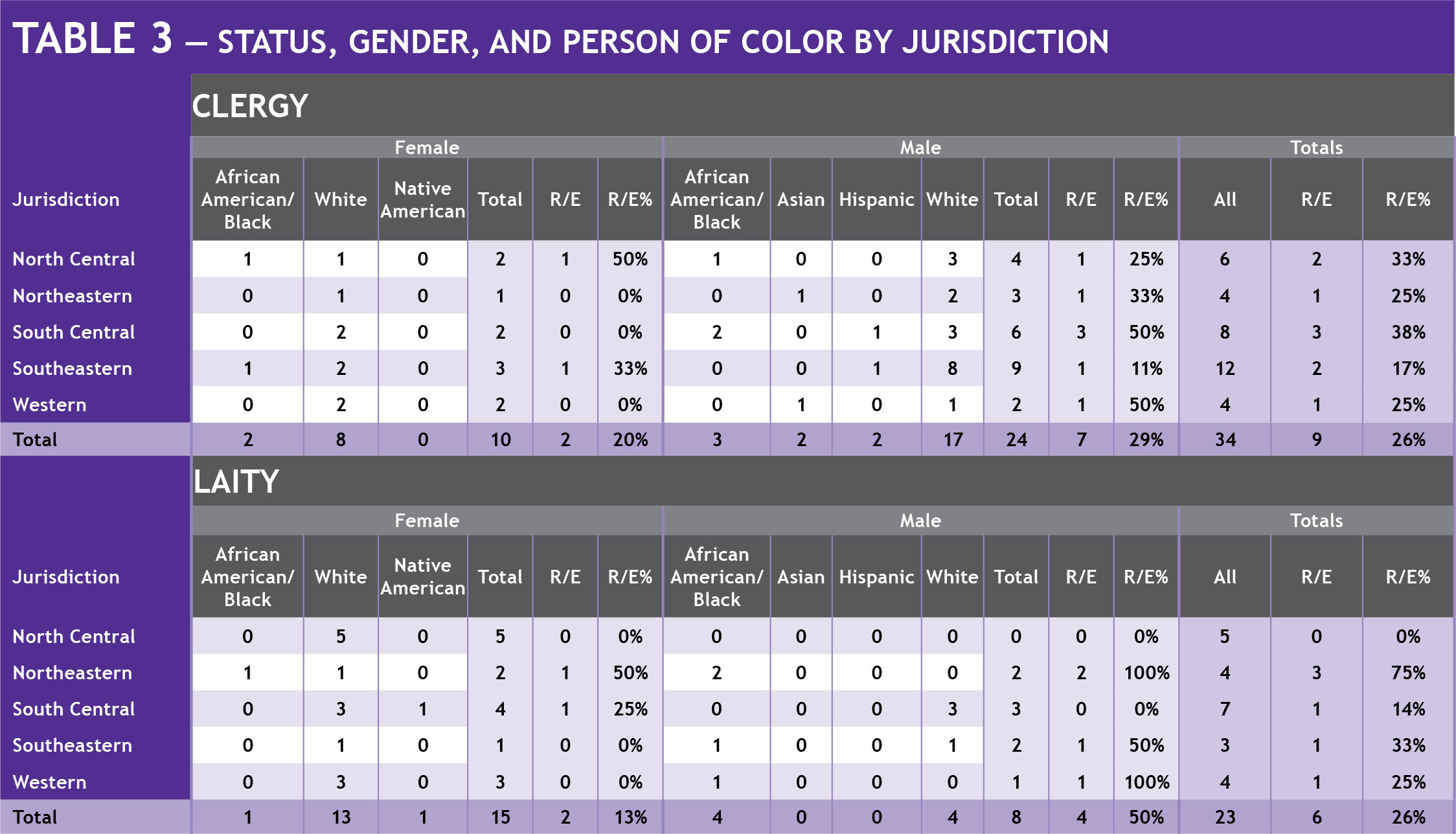 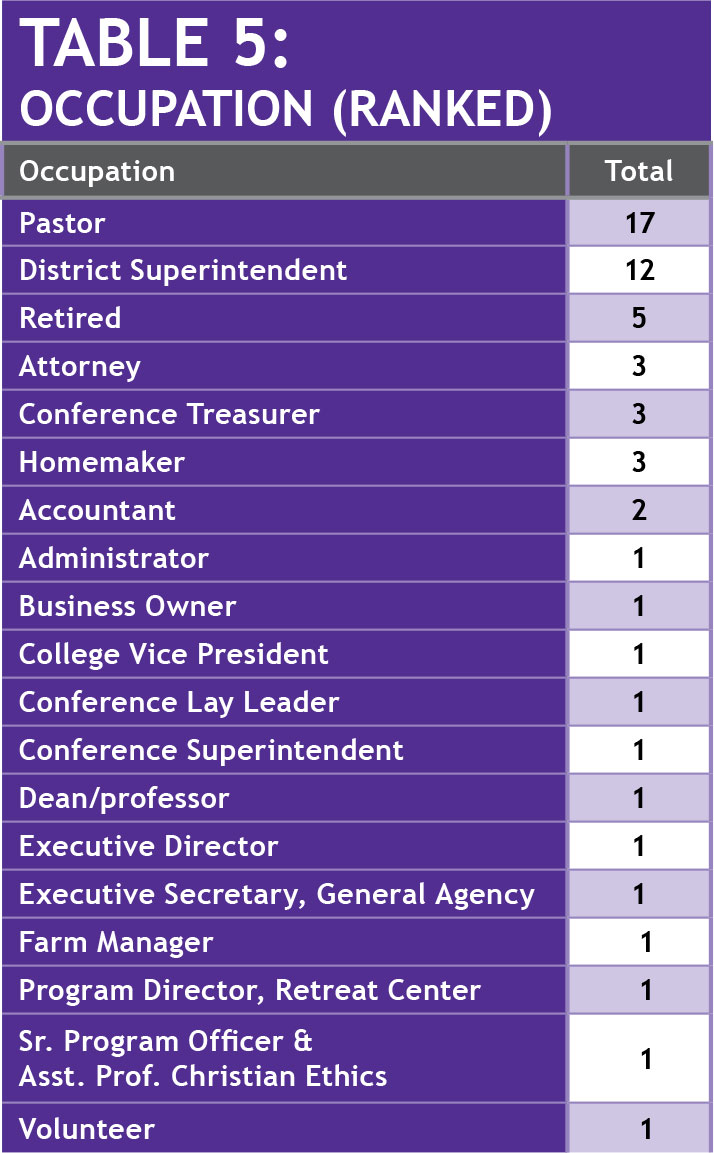 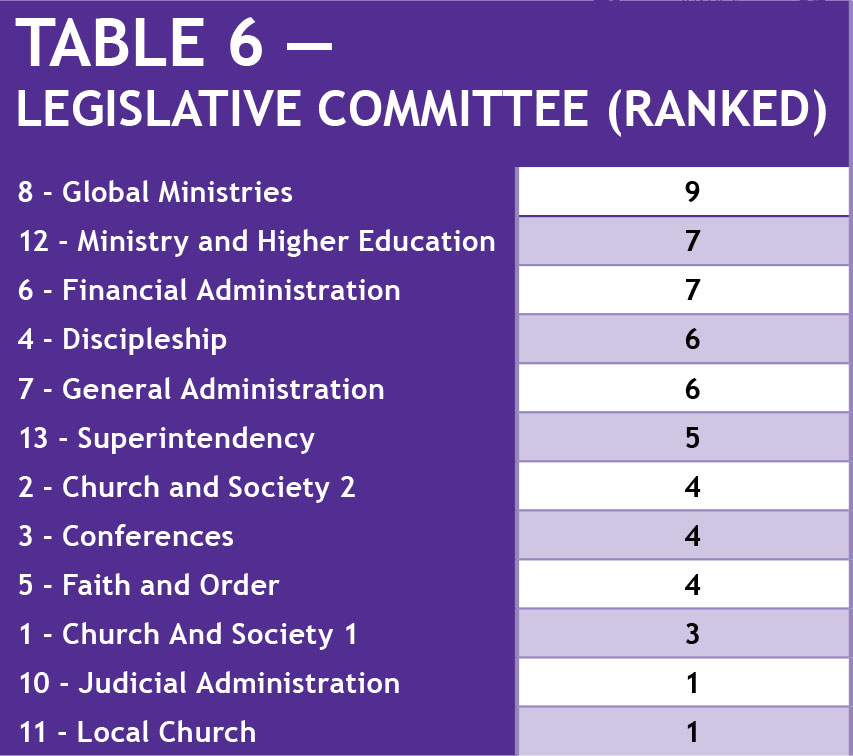 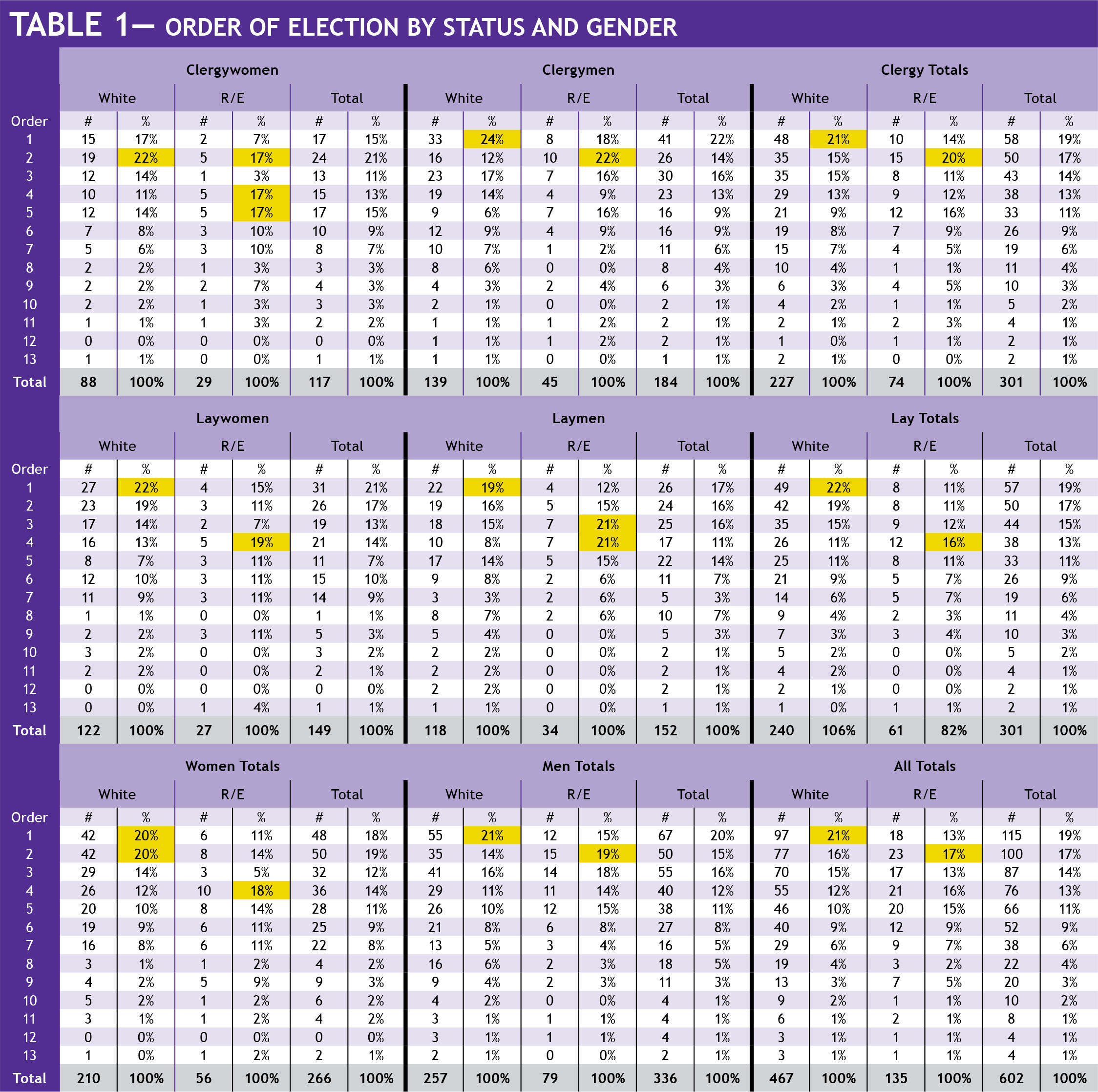 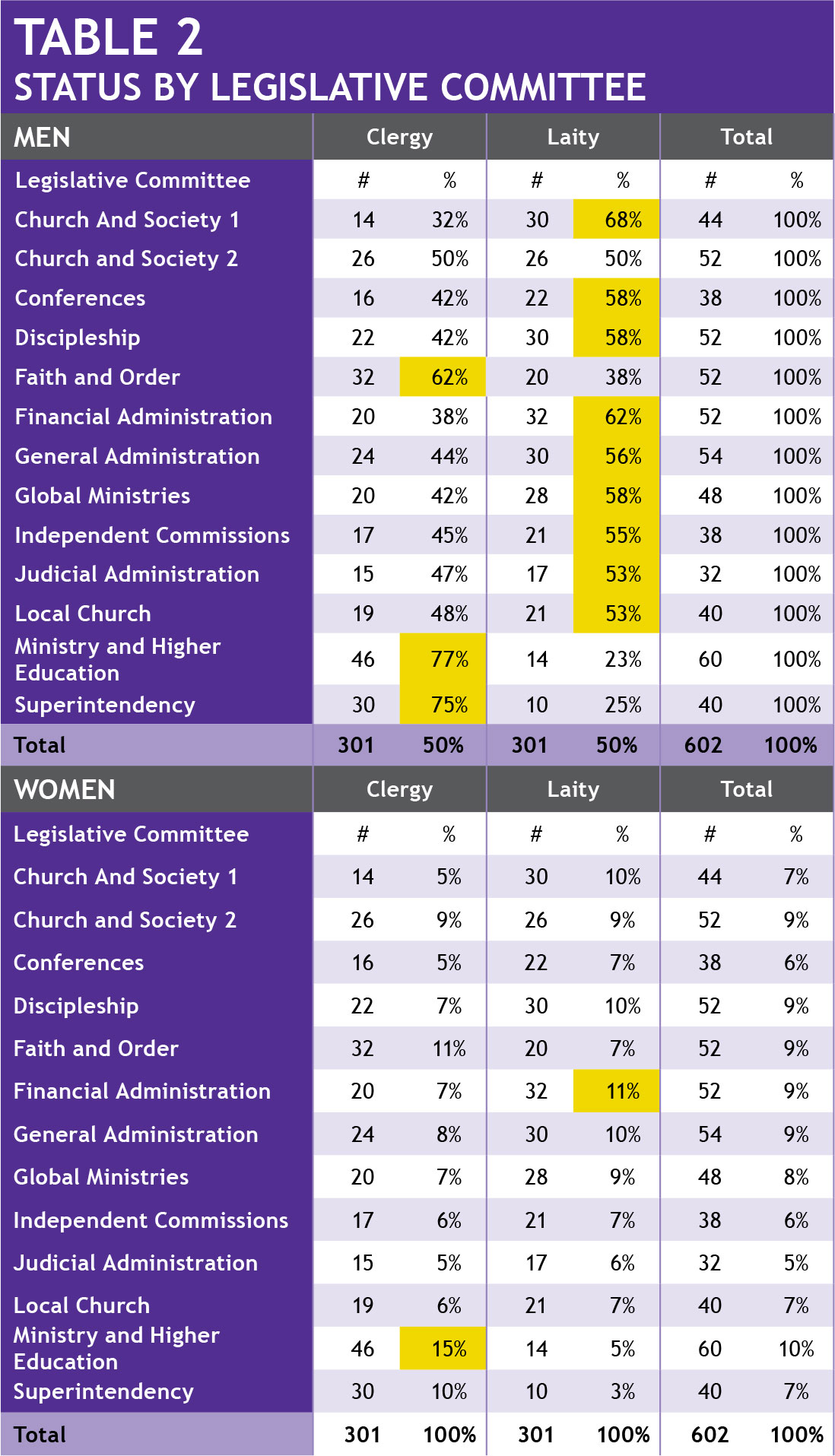 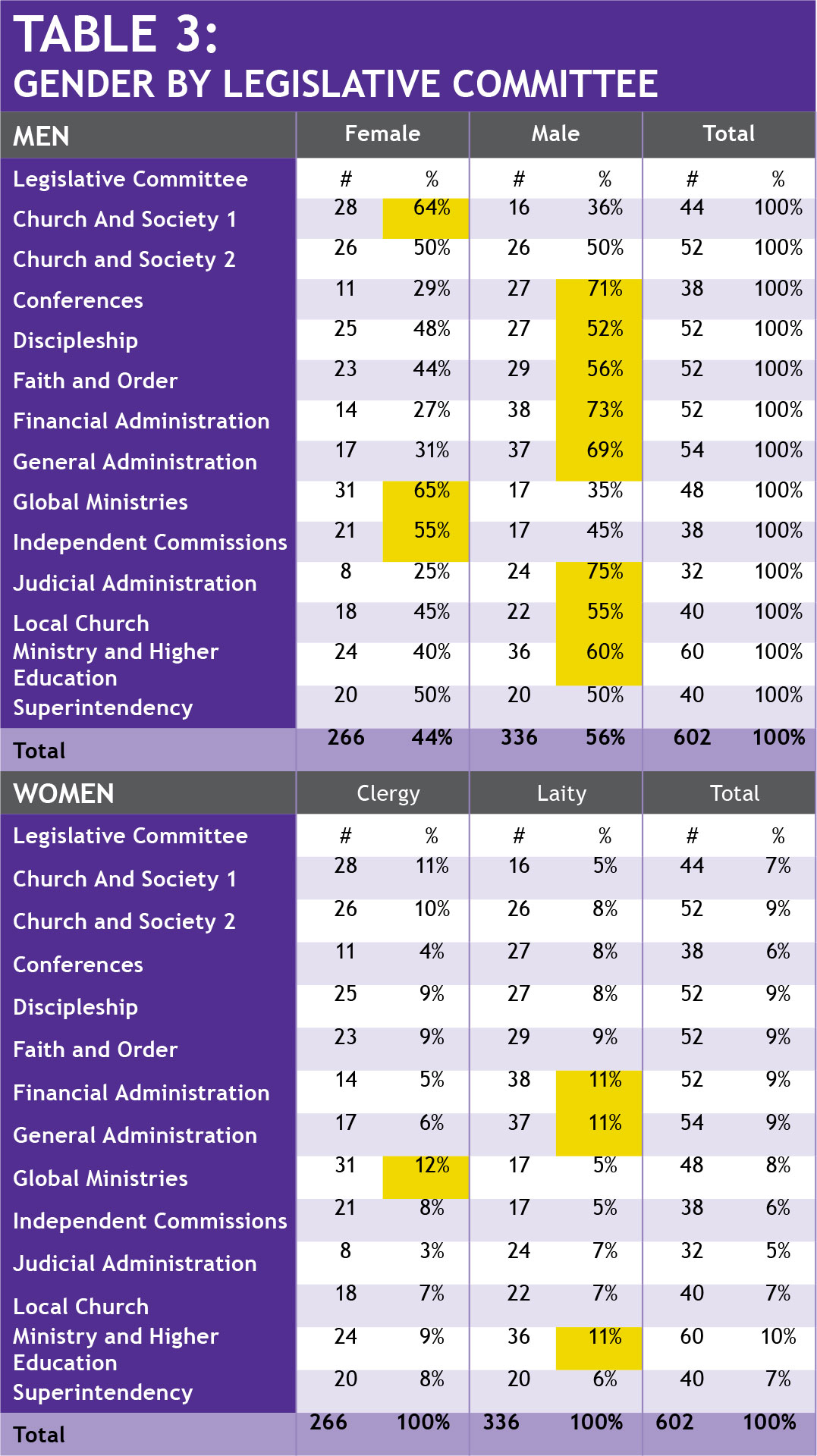 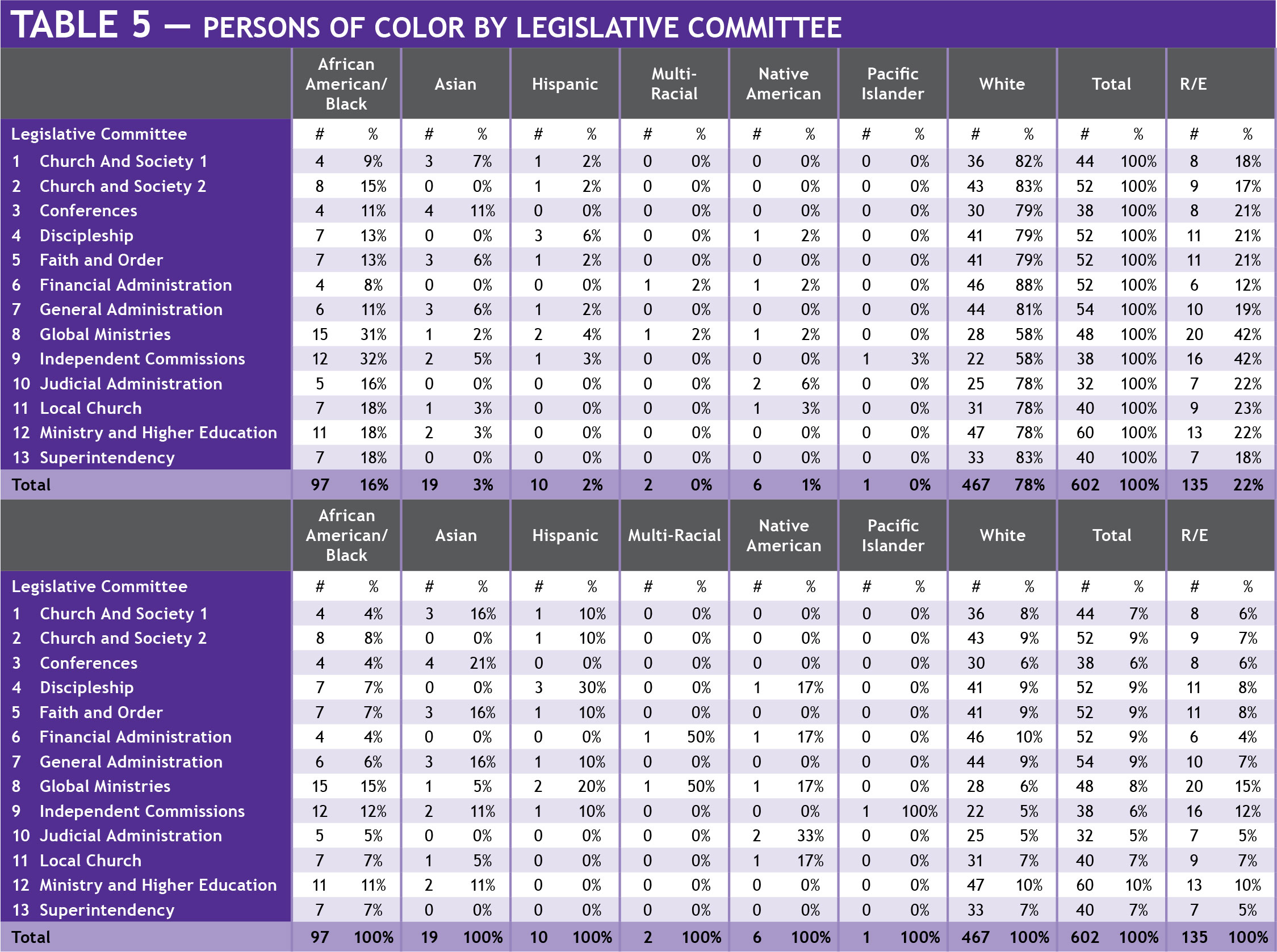 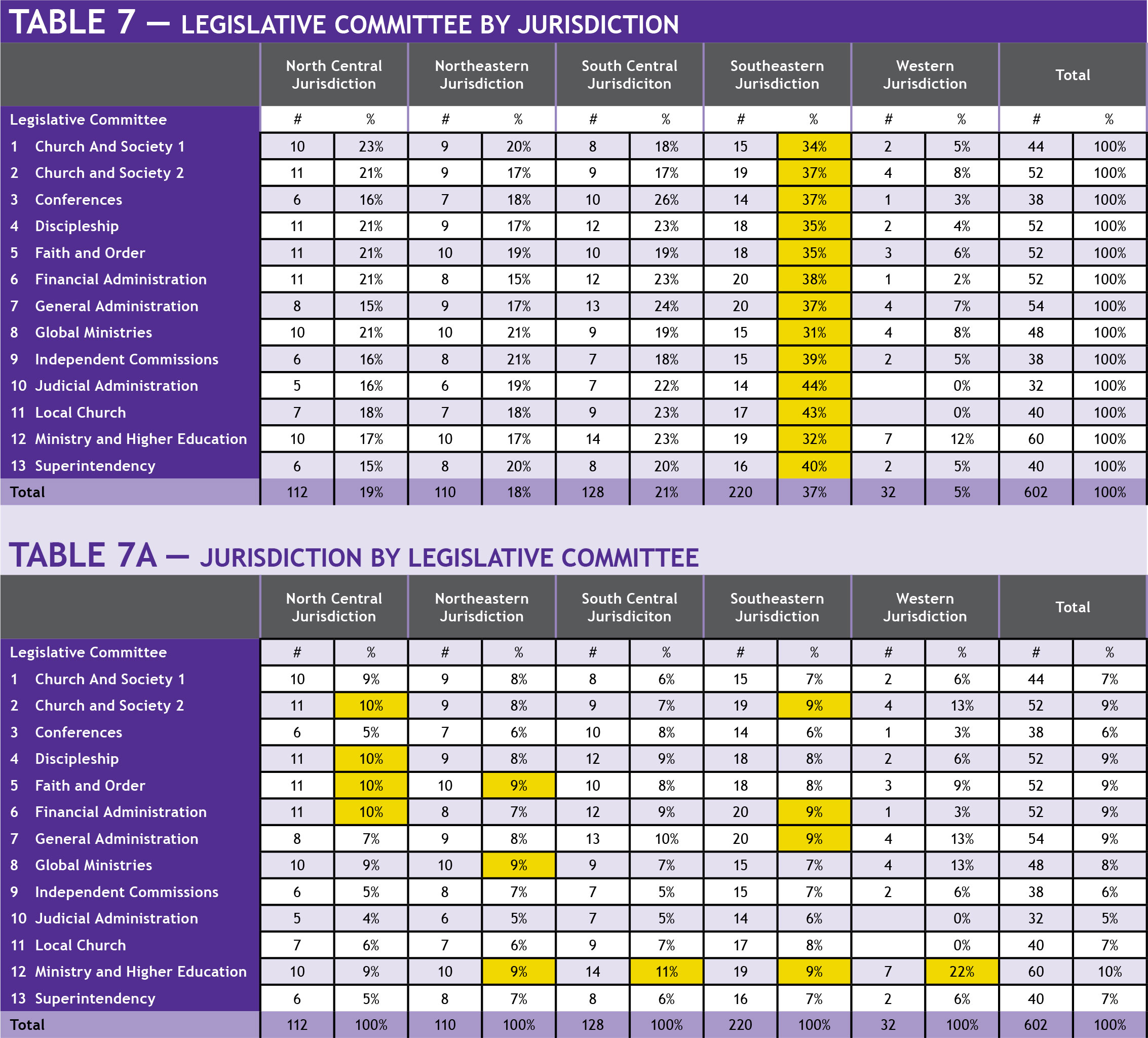 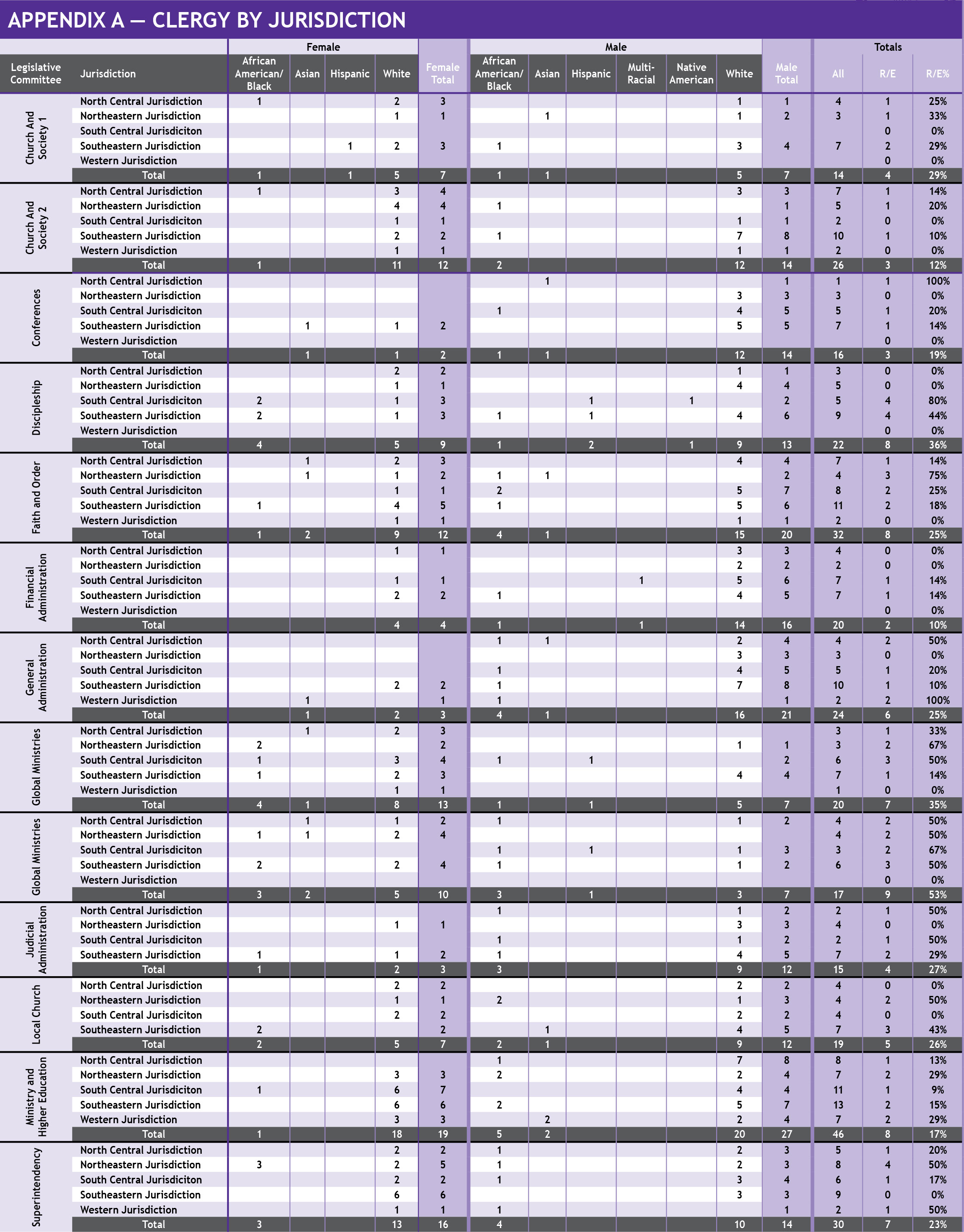 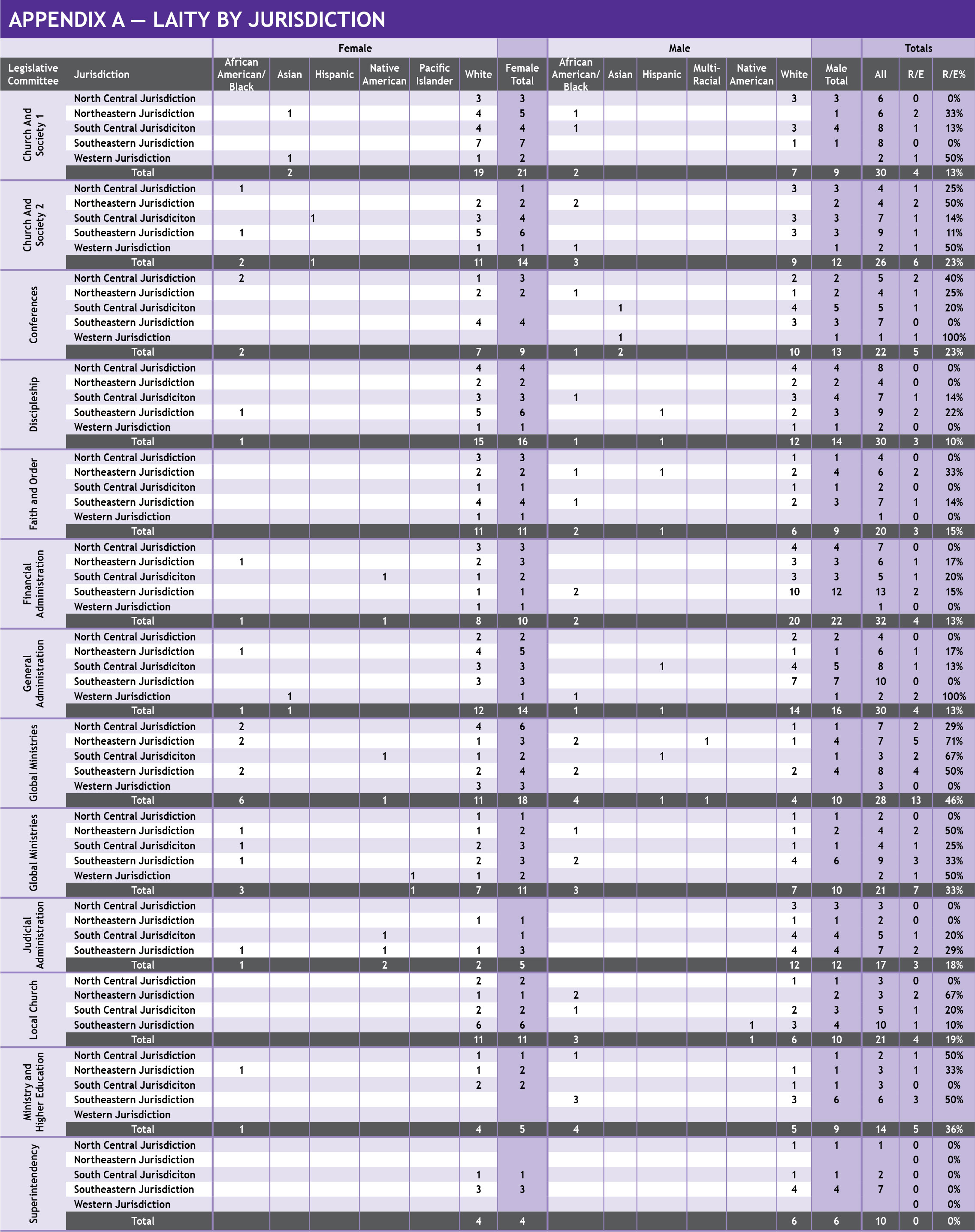