Who’s in the jurisdictional pool?

Are U.S. regions recommending an inclusive slate of representatives to churchwide agencies?

The jurisdictional pool is the collection of persons from which the jurisdictional nominating committees select people to serve as board members of the various agencies of The United Methodist Church. (The General Council on Finance and Administration, General Commission on United Methodist Men, and General Commission on Archives and History select their board members in a different manner as prescribed by the Book of Discipline.) 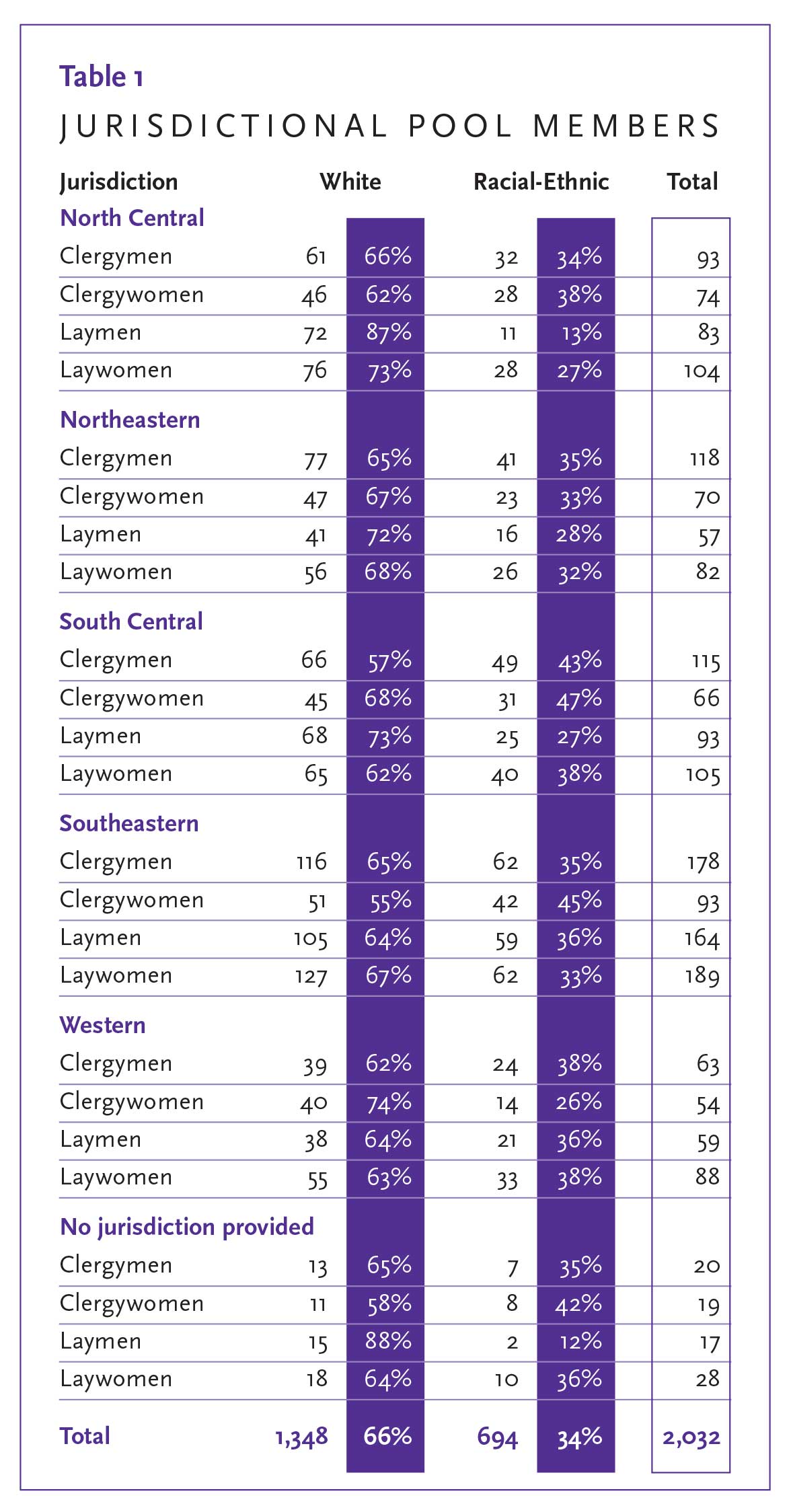 The 52%-48% split of males to females in the 2008 jurisdictional pool mirrors the overall percentages in the five U.S. jurisdictions. Only two jurisdictions, North Central (51%) and Western (54%), had a greater percentage of women than men in their 2008 pools.

One notable exception is the Western Jurisdiction, which has only one African-American clergywoman in the jurisdictional pool. Likewise, with the exception of Pacific Islanders, most racial-ethnic groups have representation in each jurisdiction. (For more detailed information, please visit www.gcsrw.org).

There are, in fact, sufficient numbers of women and people of color in the pool to offer gender and racial parity at the agency power tables. Why, then, are women and racial-ethnic persons underrepresented on many agency boards?

Where do they want to serve?

Equitable representation is not just a matter of adequate numbers, but also is affected by the agencies people in the pool choose to serve. Most members of the pool, across categories of race and gender, select as their first four choices for placement General Board of Church and Society, General Board of Discipleship, General Board of Global Ministries, and General Board of Higher Education and Ministry (Table 3). 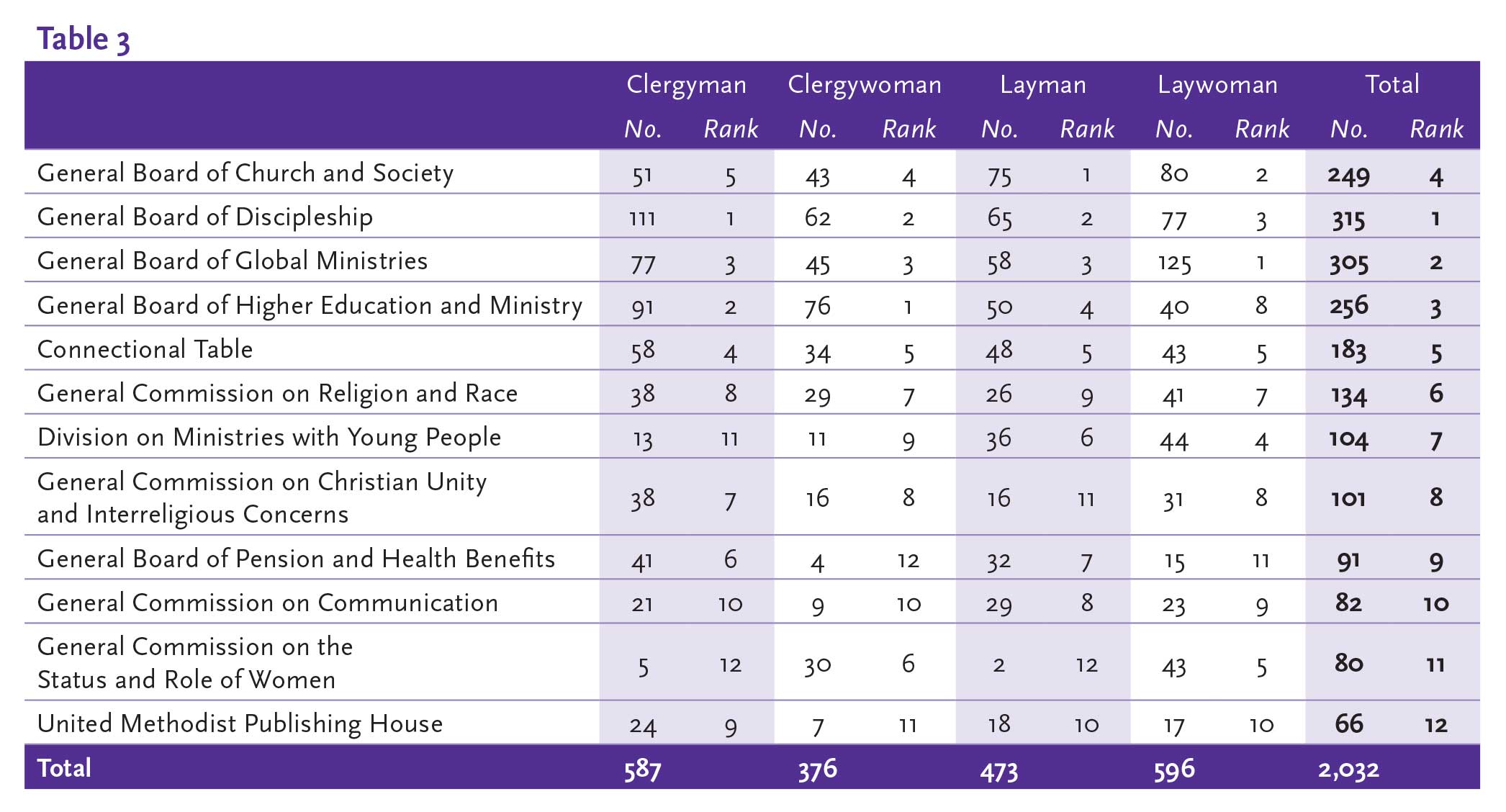 Again, Table 3 indicates that women are willing to serve on each board of an agency. However, when tracking by race-ethnicity and gender, some agencies have few or no women and people of color ranking them as first choice. In fact, several agencies had no laywomen or clergywomen who ranked them their first choice for the 2009-12 term. Likewise, laymen and clergymen did not list some of the agencies as their first choice.

True, some may not feel called to serve on a particular board or commission. Other individuals may feel that their time and talents are best served within a particular board or commission. Yet, in looking at the choices, it must be asked: When it comes to serving the general church, do individuals approach that work with an open heart and open mind and truly believe, “Here I am, Lord, send me?”

Correction: In the Oct.-Dec. 2008 “Women by the Numbers” article, the number of U.S. women bishops is down by 1. The table had Bishop Hayes’ information wrong. Under South Central, Oklahoma and Oklahoma Indian Missionary, Bishop Hayes should be listed as male and black.

A challenge for annual conference clergywomen’s groups, United Methodist Women’s groups, women of color networks and COSROWs is to make sure that we are urging women to seek out new opportunities for service and learning on all agencies, and to make sure that agencies are seeking out diversity through their additional nominating process (see sidebar). It will also help if these groups help orient women and people of color who are new to church leadership about the work of all agencies and how their gifts can enhance the mission of every church agency.

Craid This is data analyst in the Department of Institutional Research at Wright State University in Ohio.
Elaine May is assistant general secretary of GCSRW

Our deepest gratitude goes to Craig This for the four years of rich, “prophetic-eye-for-a-whole-church” analytical wisdom he has contributed to The Flyer’s “Women by the Numbers” column. We will miss him and we wish him Godspeed in his full-time endeavors. Beginning next issue, the Rev. Gail Murphy-Geiss will be writing for this column.
Download PDF