Glass ceiling for service on boards

Further hindering the female voice on the boards is the lack of representation for female bishops. The General Board of Church and Society (GBCS) has an even 3-3 split, but both GBGM (7 male; 4 female) and GBOD (5 male; 1 female) have more male bishops than female while GBHEM has 6 male bishops and no female bishops (see Table 2). GBHEM has as part of its responsibility the standards for ordained ministry.

The general commissions tend to have a better representation of women and men serving as members. While some may argue that this tends to even things out between the boards and agencies, in terms of membership, it does not. The boards have larger budgets, broader oversight, and significantly wider-ranging responsibilities than the commissions. The commissions are mandated by the church to advocate for racial and gender inclusiveness and provide our representation in interfaith and ecumenical relationships.

Are the commissions “feminine” and the boards “masculine”?

A recent United Methodist News Service article asked, “Is Church Too Feminine for Men?” (July 19, 2006). The article commented that The United Methodist Church is “‘feminized to a degree’ because a disproportionate number of women are present as the power players.’” While the article examined several factors as influencing the “feminization” of the church, one key factor repeatedly highlighted was the number of women members in the church today.

From the standpoint of numbers, then, yes the commissions are feminine and the boards are masculine. It can also be concluded, based on the numbers, that men get elected to boards and women get elected to commissions. This dichotomy, however, is not based on male or female gender differences. The question is (based on budgets and responsibilities) are tasks having to do with money management and agenda setting in the church “men’s work”? Is it “women’s work” when the subject is relationship building, anti-bias concerns and budgets are significantly less?

Further, if a disproportionate number of women were present as the power players, as the article states, then it would be expected that women would have equal or greater representation on the boards as well as the commissions. The article seems to imply that women, through these power players, are able to leverage greater representation in the church. This is not the case.

Not only were women underrepresented as board members in the 2005–2008 quadrennium, women are less likely to be elected as leaders (see Table 3). Women are not able to overcome the bias and culture that tends to elect men to serve on the boards and men to serve in leadership positions, whether on a board or commission. 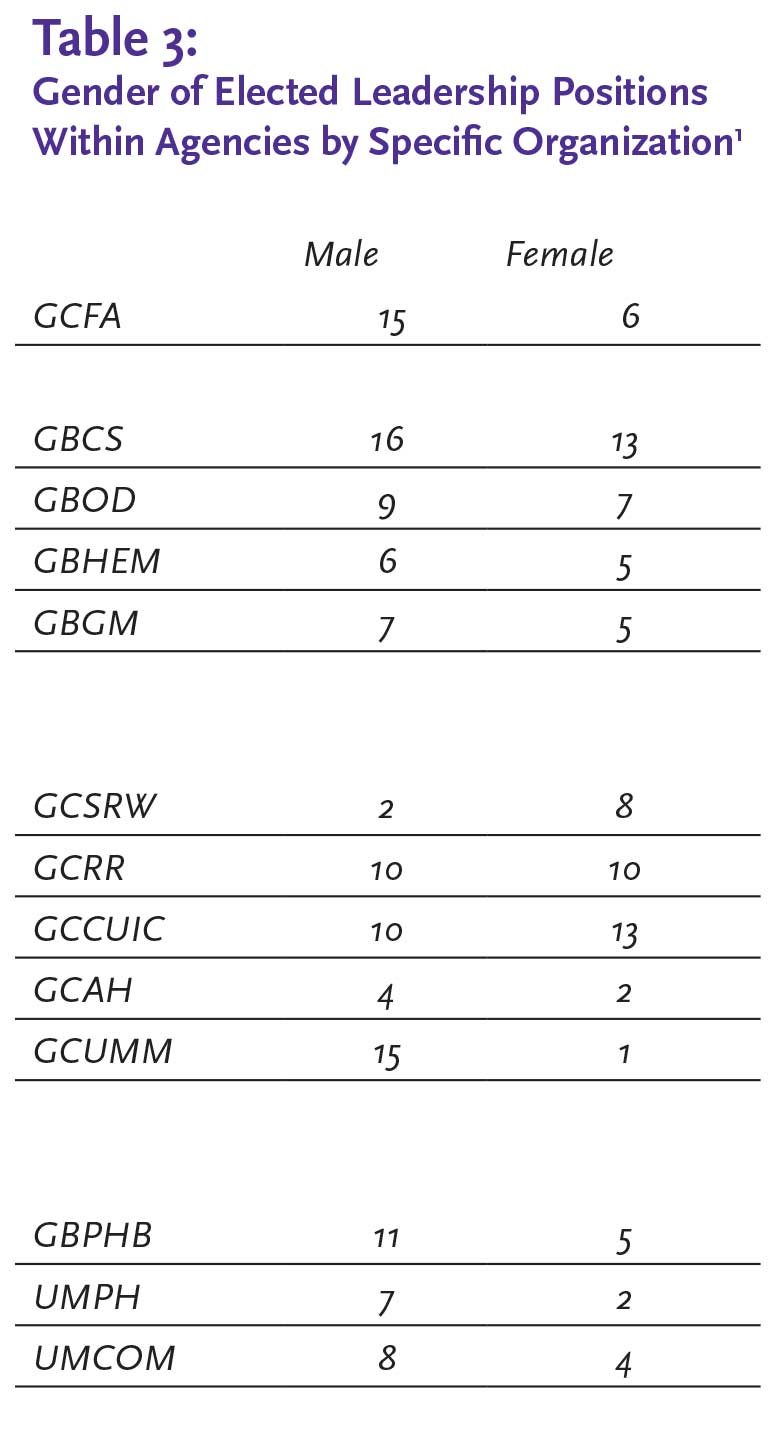 Craig This is a faculty member of the Department of Sociology, Geography, and Social Work at Sinclair Community College.