Women comprise two-thirds of general agency workforce—but at what level?

By Craig This and Elaine Moy

Women, who are 58% of total United Methodist membership, hold more than half of the executive (52%), managerial (59%), technical (61%) positions and over two-thirds of the professional positions (69%) (see Table 1).

In this sense, women’s progress in the church mirrors that of the secular world in that women are being promoted to a certain level of leadership and responsibility, but they are not given as many opportunities at the highest management and administrative levels. A glass ceiling does exist for women in the church as it does in the secular world.

Not surprisingly, women hold 77% of the administrative and clerical support positions in the general agencies. The church often limits the leadership opportunities for women and tends to pigeonhole women in certain occupations. 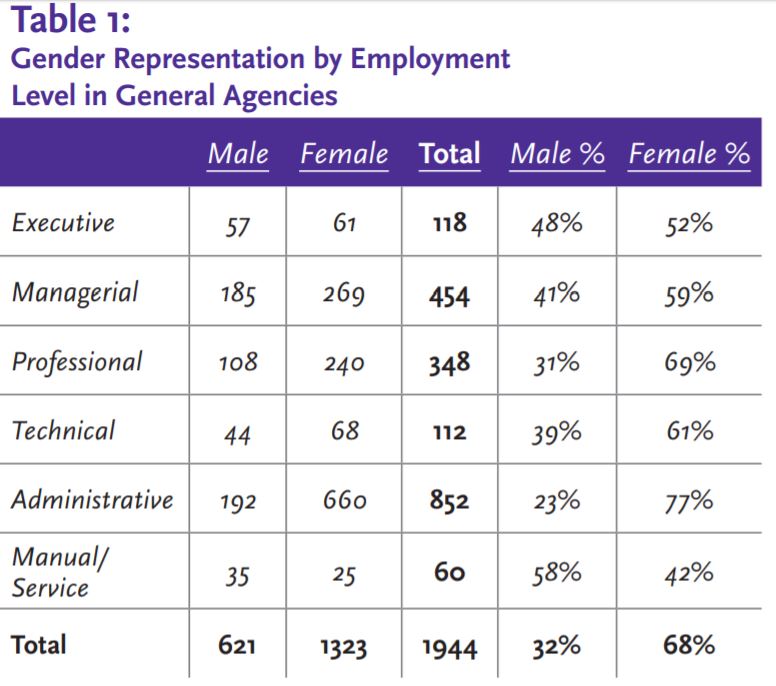 Clearly, while women have earned more leadership positions in recent years, there are some positions that are still seen as “women-only” (see Table 2).

The employment numbers of the general agencies stand in stark contrast to the number of women serving as members of the various boards and agencies.

Women and the commissions

The 2004 Book of Discipline, ¶703.2 &3, defines a general board as a continuing body of the church to carry out assigned functions or programs, administration, or service and a general commission as an organization for the fulfillment of a specific function for an indefinite period of time. Commissions have smaller staffs and budgets than do the general boards. As a result, calculating employment based on small numbers creates somewhat skewed results.

The Commission on Men and the Commission on Women are each charged by General Conference to focus on a specific ministry of men and women, respectively, in the church. As a result, 75% of the UMM workforce is male and 100% of the GCSRW workforce is female. That is to be expected.

Further, three of the general commissions—Archives and History, Christian Unity and Interreligious Concerns, and Religion and Race—have a greater percentage of men than women at their executive levels as compared with the general boards. However, when one looks closely, each of these commissions has 1, 4, and 1 executive positions, respectively, to fill, unlike the number of positions available with the general boards. (It should be noted that the General Commission on Religion and Race recently achieved an even distribution of men and women in the leadership level.)

Conclusion: So what does this all mean?

The employment numbers of women in the general agencies stand in stark contrast to the number of women serving as members of the various boards and agencies (see “Women aiming for national agency leadership often hit glass ceiling” The Flyer, October–December 2006). In that article, it was shown that although women are the majority in terms of overall church membership, they are not as well represented (45%) as members of agency governing councils, boards, and commissions.

The United Methodist Church at all levels has made strides in bringing women into full participation and leadership in our work and ministry. General agencies hire and promote women at a higher level than do some other entities in the church. Women are 68 of the general agency workforce, compared to only 22% of active bishops, 19% of active clergy, 37% of General Conference delegates, and 45% of voting members of general agency governing boards. It would seem that when it comes to empowering women, church-wide agencies overall are setting a strong example in answering the call to greater parity for women.

Craig This is a faculty member of the Department of Sociology, Geography, and Social Work at Sinclair Community College.