3 things we can no longer assume when we communicate

On April 17, 2018, at the front of a Boeing 737 plane, a casual announcement was made as passengers were preparing to fly from New York to Dallas. As happens on every other day before takeoff, the flight attendant took the intercom, asked for everyone's attention and announced the safety procedures.

A few passengers on that plane paid attention to the safety announcement. The overwhelming majority did not.

Twenty minutes into the flight, something terrible took place. A fan blade broke in one of the engines. The debris from the fan blade hit the side of the plane, shattering one of the windows and creating absolute chaos.

The passengers were asked to do one simple thing: Put the oxygen masks on, just as they were instructed to do in the safety announcement before the plane took off. 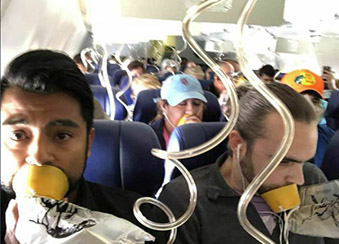 However, pictures taken during the incident revealed that most of the passengers did not put their oxygen masks on correctly. They placed the masks over just their mouth not their mouth and nose as they had been instructed to do.

Most of the passengers weren't listening as the announcement was spoken. It wasn't heard.

The important information every person needed was clearly communicated in the safety announcements. Still, most people didn't get the message. Communication didn't occur.

Today, there are more things fighting for our attention than ever before. Everywhere we go, we are constantly bombarded by advertisements, messages, images, videos and agendas that are competing for the valuable commodity of our sole attention.

That presents a challenge for those of us in the church because everything we communicate first requires that we attract the attention of those we want to reach.

1. Stop assuming you have your audience's attention. Earn it.

To earn the attention of your audience, focus on how you will intentionally capture and keep their attention. Don't assume you already have it.

Saying something doesn't mean your audience hears it. If you're a parent, you know this to be true. I can tell my son Ethan not to hang on every table in the house like monkey bars. Yet, when the call to meet at the urgent care comes, it becomes clear: just because I said it doesn't mean Ethan processed it.

Church staff and leaders deal with the curse of knowledge. We can't help but think like insiders. We're invested in our mission and our message. As a result, our communication is too often built on the assumption that since we care about our message, so will our audience.

In response to the information overload we all face, we each have developed a survival mechanism to filter the messages we receive. We ask: "What's in it for me?" That may sound harsh and selfish, but it's the new reality for how people sort the more than 10,000 messages they receive each day.

When you're frustrated with the engagement and response to your message, what do you do? Most churches assume the issue is that the audience needs more information. They talk longer, give more information, speak louder, make the font bigger and add more.

The problem with "more" is that the people you're communicating with are already overwhelmed by the messages and agendas they're receiving each day.

You lose attention when you continue to add, and you create more work — for you and for each person you target. Opt instead for the hard work of simplifying the message you're communicating.

Communication has been long overlooked in the church. It's time for that to change. The church doesn't have a message problem but rather a message delivery problem.

Implement these steps and connect with the training, articles and grant resources provided by United Methodist Communications to help your community see how your church meets their needs.

To help you navigate the greatest communication shift in over 500 years, Phil Bowdle recently wrote a book for pastors, ministry and communication leaders called "Rethink Communication: A Playbook to Clarify and Communicate Everything In Your Church." He got his start as a pastor's kid making faces at his dad as he preached. Growing up, Phil had no desire to go into ministry. Now, there's nothing he'd rather do.