Behind every good video is a script

Whether you're producing a flashy promo or an impromptu social media video, a script is a must. A good audio visual (AV or video) script is a vital aspect of post-production that keeps you on track and on budget.

The good news is that scripts are a lot easier than they seem.

In this article, we’ll explore how to write an effective video script, regardless of your project or experience. You’ll also find free script and storyboard templates to get you started.

Think of an AV script as the “blueprint” for your finished product. While this type of script can also be used for a shooting script, an effective AV script serves as the instruction manual for the video editor. It's typically created after you’ve nailed down your video concept and, in most cases, after the actual footage has been acquired or filmed. No matter what type of video you’re producing, every AV script should include a few key components for greater clarity and ease of editing. 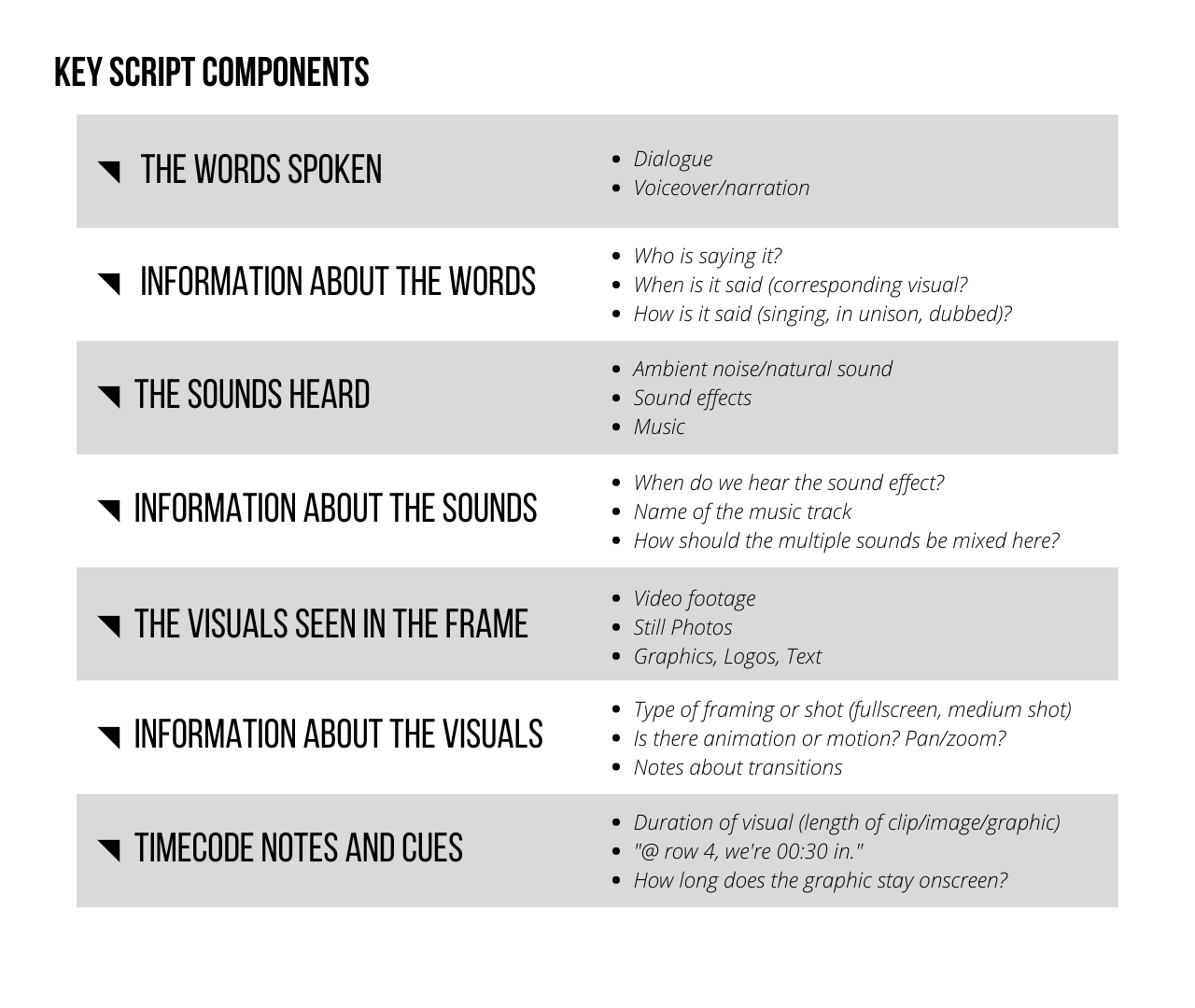 Writing an AV script means planning both the sights and sounds of your video. The most common format for this is a two-column script. It’s a simple yet extremely flexible layout. You may find yourself needing additional columns when scripting more complex projects, but for now let’s focus on mastering the typical two-column format.* 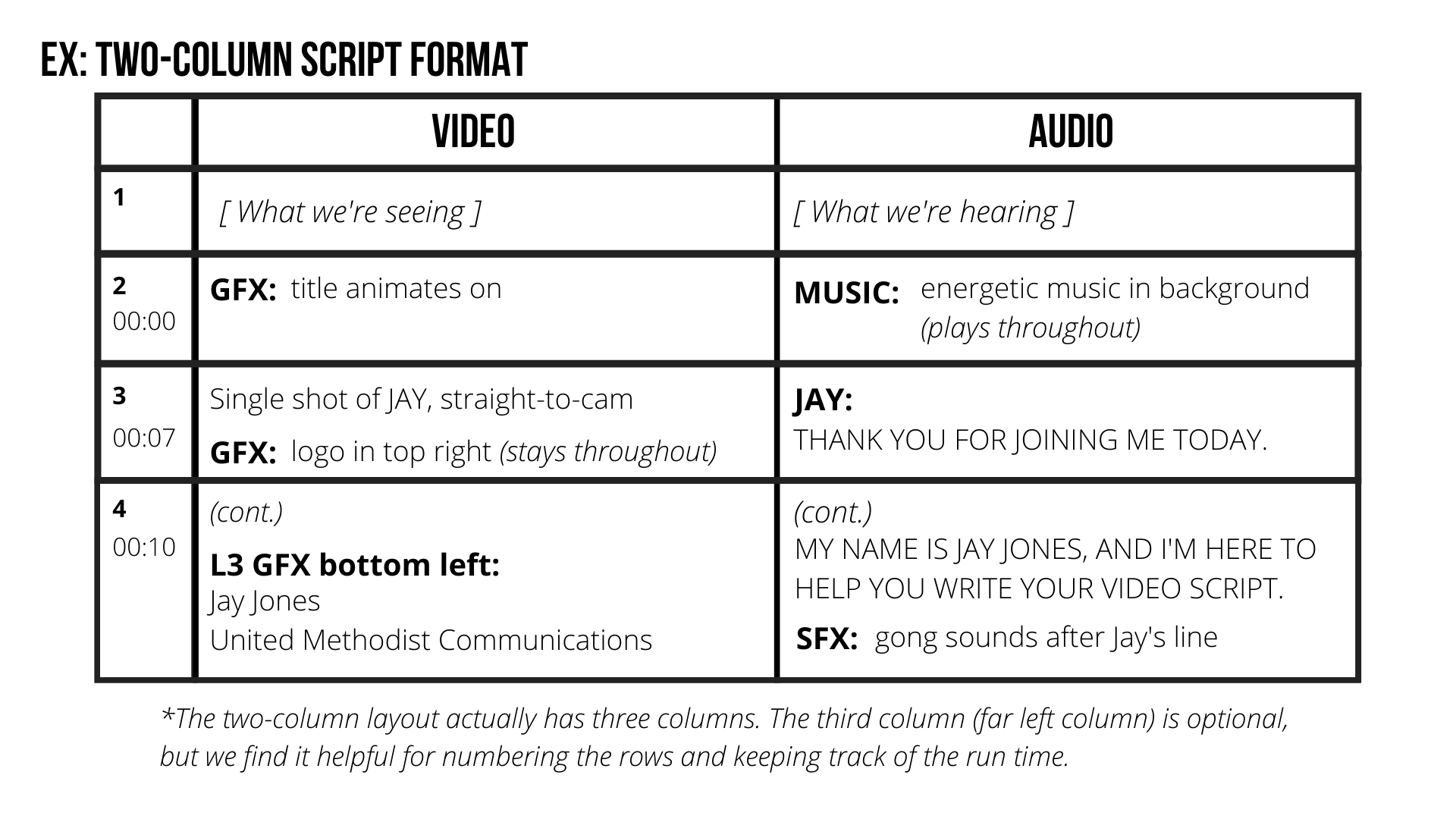 The AV script separates audio and video elements into two columns and breaks each “shot” into a new row. Think of each row as a set of instructions for that particular shot — “we’re seeing this [video] while we’re hearing this [audio]” — so the content of the columns should be synchronized across the row.

The audio column contains information about dialogue, sound effects and music. The video column describes all corresponding visual aspects or what appears on screen while a specific line is performed. Breaking each scene into a new row makes it easier to visualize the flow of the script and to understand what’s needed to move from one shot to the next.

To script each shot, think about what you want your audience to see, hear and feel.

Post-production should not begin until your script is 100% approved. Once you have a first draft, go through and edit to cut unnecessary content. Making changes to the script after post-production begins can quickly throw you off schedule and perhaps take you over budget. Go through your script multiple times before hiring voiceover talent or handing it off to your video editor. Good editing is about condensing your script to pack a punch and preserve what matters. Don’t forget to get plenty of feedback from your team or client on your script before finalizing things.

GET OUT OF YOUR HEAD

Sometimes words look good on paper but don’t flow well when spoken. If your script features spoken words, you need to read them aloud to make sure they work. Read it all the way through and take note of spots that sound clunky or cause stumbles. Keep tweaking the script until you can read it all in one take, without stumbles. Record yourself speaking the lines and play it back to be aware of how the voiceover will truly sound.

Be detailed but concise. Only include what you absolutely need on your AV script. If your video is complex and your script looks crowded, consider adding columns to better accommodate your needs. Perhaps you need an additional column specifically for still graphics or a column for storyboard sketches. As long as you’re not being redundant, additional columns can help keep your script organized and precise.

Use abbreviations for recurring cue notes to optimize space, and incorporate color associations or font styles to further organize your script. You’ll want to be familiar with this list of common abbreviations for video and audio cues:

To effectively write and produce your AV script, you must know your time constraints. Timing affects every aspect of a video, so don’t write anything until you’ve set your run time.

Once you’ve got a first draft, run the spoken lines of your script through a program such as Script2Time.com to check the estimated read time. If you find that the spoken lines are taking up more time than the corresponding visuals, give your script another pass to spot opportunities to replace a spoken line with a compelling visual. Don’t explain what you can show. Let your visuals do the work, and make every second count.

If you don’t have time to start from scratch, download our free script and storyboard templates. You can even take a stab at creating your own script template so that you’re ready the next time inspiration strikes.

There you have it — everything you need to write an effective video script. It may seem challenging at first, but you know what they say: Practice makes perfect. No one writes a script perfectly the first time, so write and rewrite — and then rewrite again.

The stronger your script, the more creative you can be with your end product and the less headaches you’ll suffer along the way. At the same time, set yourself up for success by outlining clear goals and distilling your story fully before jumping into the scripting process.

Ultimately, a great video script begins with a great story. 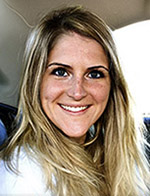