What UMCs learned from the pandemic, and what worked for them

The COVID-19 pandemic created drastic changes in how we do everything from buying groceries to looking at a restaurant menu. As we have moved into and out of different levels of lockdowns and mandates, churches have needed to innovate and experiment.

We talked to several churches throughout the United States to find out what worked for them and what didn’t. Here are some things that we learned from their staff.

More frequent communication helped many churches increase the depth of connection and care.

When unable to gather in traditional ways, the Rev. James Martin of Manatee United Methodist Church, increased his communication with his parishioners.

He began writing a daily devotional that he emailed every morning. Although there were many restrictions in their Bradenton, Florida, community, he notes that “the numbers continue to grow as they forward the emails on to others.”

More frequent communication helped many churches increase the depth of connection and care even when everyone was not able to gather in traditional ways.

Once some of the members realized she was calling everyone, they decided to make that a hallmark of how they care for each other. They formed a team, called themselves ROCKs (Reach Out Calling Kids) and divided the membership into several parts. Then, every week they called those on their list to offer a prayer and see if people were OK or if they had any needs.

The ministry provided medical supplies, Bibles, hymnals and even delivered weekly bulletins. Although they are back to meeting in-person, the calling has continued. They even put the pastor on the list.

“As a pastor, I love getting a caring call, too,” Koucher-Ross said. “It created a new ministry and brought our church closer beyond Sunday morning.”

When Branden Scott, the pastor at Royal Center UMC and Radnor UMC in Indiana had to cancel in-person worship, he did what many others did: He took ministry online, offering a devotional on Facebook Live and a Wednesday Bible study via Zoom.

What we heard from churches such as Royal Center UMC was that the skills they developed by producing online content spread to other areas. Scott used these skills to start a podcast called the Fandom Pastor (Spotify, Apple Podcasts). Through it, he “shows the connection between God and fandoms” such as Star Wars, Broadway, Thundercats, Peanuts and many more.

The method of receiving offerings required innovation for churches during socially distanced times.

The Rev. Brian Matthews, pastor at First UMC of Ada in Oklahoma, noted that the move to online offering was surprisingly successful and easily accepted by everyone. It went so well at his church that they “have no plans to ever pass an offering plate.”

When they returned to in-person services, they placed plates at eight stations around the room for those who prefer to give in person. They continue to encourage people to give online whether they are participating in person or through their livestream.

Many churches expected live-streamed and recorded worship services to phase out once in-person services resumed. That has not been the case. For several reasons, online worship appears to be here to stay.

Faith United Methodist Church in Dickinson, Texas, offers a virtual service at 10 a.m. followed by in-person worship at 11 a.m.. Both are well attended.

Their pastor, Johnnie Simpson Jr., said that setting a threshold for returning all online attendees to in-person didn’t work. He said that online and in-person services are going to be in the cards for the foreseeable future.

Simpson also says that one of the most effective communication tools they began using was text messaging. They implemented the Text In Church service to send group text reminders about Bible studies and a Zoom link right when it is needed. (United Methodist churches interested in text messaging are encouraged to explore the UMConnect service offered by United Methodist Communications.)

“People may not check their email, but they are very likely to have their phone within arm’s reach,” he said.

Whether it’s text messaging, podcasts or online giving, the pandemic has pushed churches to find alternative ways to connect and even increase the depth of community just as people found new ways to care for each other during this difficult time. 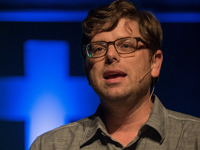